I like the idea of creating dishes by curing. Basically you take your main ingredient, normally meat or fish, smother it in a mixture of salt, sugar, herbs and spices and then leave it to do its own thing. Come back a week later, clean your magic mix off, slice up into wafer thin slivers and serve it up cold on a plate drizzled with some olive oil or with some bread and pickles. And hey presto you're a culinary wizard, albeit a lazy one maybe but still it often impresses. Admittedly I have only ever really gone down the gravadlax route before with salmon using different cures, lime and vodka is a winner, so I am intrigued to see how this home made bresaola turns out.

Bresaola is normally made with beef, air-cured over a long period of time (3 months) but I have found a recipe that uses duck and only takes four days which is good as I am not that patient. To feed 6 people as a starter, two breasts should do the trick. 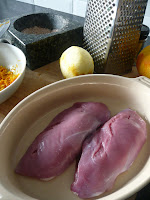 The key ingredients for the cure are salt, peppercorns, star anise, coriander seed, all crushed up in a pestle and mortar and then mixed in with the zest from one orange and one lemon. Remove all the skin and fat from your duck breasts and smother the cure over them, pat it all down and place in a fridge covered with cling film. And then the alchemy begins. 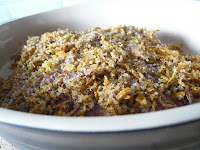 I hope, see you in four days.