Houston, we have a problem

Holy Mother of God! WHAT IS THAT SMELL? 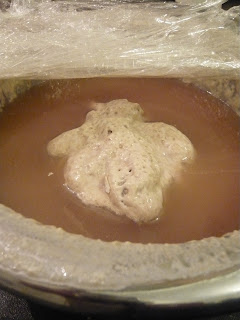 Hmm, this doesn't look good and doesn't come anywhere near to smelling good either. The last time I encountered such an aroma was when I eventually peeled off my socks and boots after a 5 day stint at a particularly damp Glastonbury. That tour of duty resulted in trench foot and such was the stench, I had to stick my feet out of the car window for the entire 4 hour journey home and I can tell you, it took a good while after that to nurse them back to fragrant health. The source of the offending funk this time however is coming from my sourdough starter. Like I said this doesn't look good.
So have I gone wrong somewhere? Well at this stage, it's hard to say. The recipe implicitly says that I had to wrap the grapes in muslin and submerge in flour and dough and leave for 2 weeks. It does indeed say that after such time the mixture will smell slightly unpleasant and have a pink tinge to it. Apparently it is at this point that you can begin to 'feed' it but the tears streaming from my eyes are prompting me to have doubts especially as the starter is only 7 days old.
Before taking any action, I decided to ask some searching questions on a foodie message board and the resulting answers has thrown a multitude of spanners in the works. There's a lot of people out there who seem to really know their stuff and now I am beginning to admit to myself that this whole business of making your own starter demands a lot more respect than I gave it in the first place. The amount of information given is quite dizzying but there seems to be two factors. The first bone of contention is that I have left the mix for too long before feeding it to encourage the natural yeasts to develop, and secondly the quantities of flour and water I've used are far too much. Most of the posted methods take smaller amounts, in which you generally begin the feeding process after 24 hours. After a period of 5 days of feeding you should get a nice yeasty smelling, bubbling mix that you can contain within a jam jar. I have a big bowl of lifeless grey sludge that's covered with murky brown water and smells like the cat has shit in it.
So where do I go from here? Maybe I should try and call Mr and Mrs Sam Clark and quiz them but it's unlikely that I'll get through to them at Exmouth Market HQ. Maybe I should just plough on and proceed as instructed. Or maybe I should just chuck it all away and start again. The one saving grace has come from one foodie advisor who has suggested that the brownish liquid could in fact with time turn to alcohol. And that could open up a whole new world of possibilities! 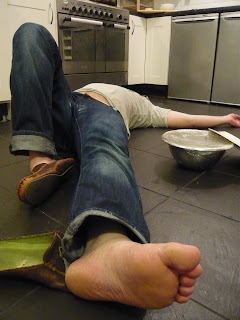