A funny thing kept happening at this restaurant I dined in last night. On the way back to my table after a toilet break (of which there were many) I kept getting lost. I just couldn't understand it. Alright I admit that I had consumed a fair few pints of the black stuff, you know to honor Mr St.Patrick and the one quarter pint of Irish blood that is in me but there must have been other malevolent forces at work, messing with my brain. In the sober light of day, I'd say that the pixie who dreamed up the interior of Little Bay had a lot to do with my befuddlement and if I ever catch it, I'll lock it up with the beer monkey that keeps stealing money from my wallet.

We were actually out celebrating the birthday of a lesser known saint, namely my Nanny Pat, the original old woman who wore purple, at her favorite local haunt in Kilburn. I'd been to Little Bay plenty of times before, the Farringdon branch that is and have always been impressed with their ethos of producing quality food at reasonable prices. I also like the mad 'Greco-Roman' decor at Farringdon a la Llewelyn-Bowen but the Kilburn branch was something else . It literally is a labyrinth of rooms and cubby holes and stairs with tables that are set at different height levels . Some diners could be found bunking up on high, overhead other patrons, some were hidden away in tiny alcoves, bathed in candlelight. Add walls flocked with cherubs and religious figures, with plush velvet drapes hanging from the ceiling and a profusion of gold gilt everywhere, the atmosphere creates such a sensory overload that it was no wonder that I kept getting lost on the way back from the loo!*
So what about the food then, well I kicked off Choux de Crab, or if your french is rusty, Choux Buns stuffed with Crab Meat, Ginger and Chillies, with Citrus Hollandaise (I don't think this is the literal translation somehow). 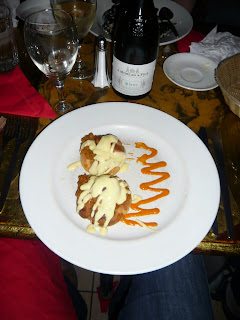 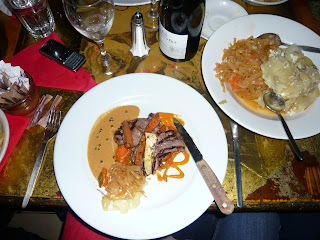 I didn't go for dessert in the end but Julie, one of Nan's friends who talks to walls, had the White Chocolate and Pistachio Parfait. 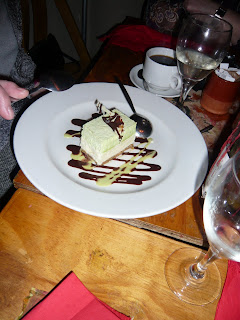 Overall the meal was a great success, the combination of flavours in the starter was a little bit muddled and the presentation was pretty much the same but the lamb steak was cooked just the way I like it, medium rare and the sauce tasted delicious. Julie threatened to stab anyone who came near her parfait with a fork so I can't really comment but she devoured it in seconds so I can only presume that it was really really really good. We went in for the house wines, red and white, which were perfectly quaffable although drinking both in equal quantities do not set you up well for the morning after. Or afternoon. Or evening come to that. And by the way, I blame you Nan for being born on one of the most alcoholic days of the year. Nothing to do with me, oh no. Unfortunately our group wasn't quite big enough to get on the 3 courses for £10 deal and it was a shame that the proprietor couldn't be cajoled into letting us have the food at that rate but still I think the overall bill amounted to £20 a head. Which isn't bad value at all really so why don't you get lost and go to Little Bay, you'll have a good time.

*I have been reliably informed that whilst the restaurant is quirky with it's little nooks and crannies, it isn't as cavernous as I imagined it to be and if I kept finding myself lost in there then I really must have been quite pissed.