Take a walk on the wild side 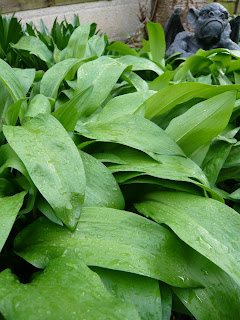 At present, our garden looks like a bomb has hit it. What am I talking about? Our garden has always looked like a bomb has hit it but this is not down to a lack of care or attention. It's more a case of lack of time as the house that we live in has taken the best part of 5 years to renovate, clean up and turn into a family home. It seemed that the previous owners had dropped "Little Boy" when we first moved in you see. So the next big plans are to concentrate on creating a little oasis out yonder, complete with raised patio area, raised flower beds, raised plot for salads and herbs and if I get my own way, a raised clay oven. If Jamie can have one, then so can I. "Yes I bet he uses his all the time" is often my wife's response to such a brilliant and fantastic idea but I will build one, oh yes. Well at least try to.

One thing that we do both agree on is to keep and cultivate some of the wilder parts of the garden, particularly the area under the cherry tree where we are lucky enough to have wild garlic growing. How it got there is anybody's business and we didn't really have a clue if it actually was wild garlic until my brother-in-law grabbed a bunch of the leaves last year, shoved them in his mouth and confirmed our suspicions ("bloody hell that's garlicky" he said). I didn't have the heart to tell him that the cats often spray around that tree but it was his endeavour that opened my eyes to the notion of foraging wild foods and that's something that I am keen to explore so watch this space.

At this time of year, the wild garlic really starts to flourish and this time around I have been determined to use it when cooking. Despite my brother-in-law's outburst, wild garlic is slightly mellower, giving a more subtle flavour and you can use any part of the plant but up till now I have only been using the leaves to pep up scrambled eggs and omelettes. So I thought about using it in a risotto, just a basic one to see how it would fair, I didn't add the garlic at stage one, I threw in the chopped leaves right at the end instead. I also threw in some mushrooms for good measure and pan-fried some salmon fillets to place on top of the risotto but I think I made the mistake of using some old vermouth bianco that I found at the back of the cupboard. The result was nice and creamy but overall the risotto was just too sweet. If I hadn't been greedy and used a glass of the Sauvignon Blanc that I was drinking, then perhaps the wild garlic would have come through more. The salmon however was gorgeous, I normally cook it en papillote, but quick frying is the way forward for me, sod the calories, I can chew on wild garlic leaves for the rest of the week. 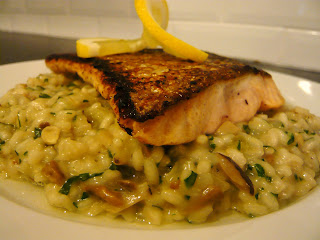