So after weeks of feeding, peering, sniffing, tasting and head scratching, the day of reckoning had come, it was finally time use my starter to bake some sourdough bread and see if all the effort had been worthwhile. The process of the baking according to St Sam and Sam is laborious in itself, taking 3 stages of preparation and roughly 18 hours from to start finish and it was during this last drawn out stretch, that the doubts began to creep back in.

The first stage takes place the night before, you have to take 450gms of strong white flour, 700mls of water and 250gms of your sourdough starter, mix it together in a bowl until smooth, cover and then leave until morning. Funnily enough that night I dreamt that I was in a huge supermarket where the only thing sold was bags and bags of flour, row upon row, aisle after aisle. I've read that dreaming of flour denotes a frugal but happy life so perhaps it was a good omen although f you buy the stuff in your dreams then apparently its a sign of an approaching illness. I can't remember going through the checkout though so I think we were going to be safe.

In the morning you proceed to the second stage where hopefully the mixture will have risen a little bit and yes mine did so we were on track. Adding a further 450gms of white flour and mixing in 3 teaspoons of fine sea salt you then beat the dough with your hands for 5-10mins until it becomes smooth and elastic. Recalling a free dvd pinched from a food magazine years ago, I went for the Richard Bertinet method of kneading where you lift the dough mixture with your fingers, flip and slam it back down and repeat. I'm not sure if it was entirely necessary and it is a noisy way of doing things especially at 6:30 in the morning but I wanted to ensure that I got as much air within the dough as possible. Leave for 10 mins and then give it another pummelling, after which you divide the dough and fill two oiled loaf tins (in my case one loaf tin, one casserole pot) just over the half way mark and dust with flour. Cover the tins with tea-towels and then leave for 3-5 hours to prove, depending on the room temperature and activity of the starter the dough should rise to just over the top. It was shortly after this point that my headache started.

After an hour, I had a quick peek under the towels and saw that nothing had happened, the dough was just sitting there, flat and lifeless. I thought that perhaps it wasn't warm enough so I switched the oven on then I checked half an hour later, still nothing so I turned up the floor heating we are lucky to have in the kitchen. 10 minutes later, still nothing so I turned on the main central heating. 5 mins later, nada, nothing, zilch , zero so I closed the kitchen window. At this point I also decided that to keep continuing to check on the bloody thing was going to drive me up the wall so I popped out on an errand. When I got back after about an hour, I checked again and finally success, the dough was rising. My wife was milling about stripped to her underwear and the babies were sitting around just in their nappies but bloody hell, yes the dough was rising! I left it for the full 5 hours in the end and perhaps it could have risen a bit more but it was light and springy to the touch.

So at stage 3, off the tins went into the oven, heated to 230 degrees centigrade, to be left alone for 30 minutes. After that time is up, the loaves can be taken out of the tins and baked for a further 10 minutes or so to form a nice brown crust. The loaves are then to be left to cool completely, the temptation to carve a slice off when bread has just come out of the oven is always great for me but I managed to resist. The end result? Well St Sam and Sam mention that if the bread has split or cracked in anyway then it hasn't proved enough and mine had but for a first attempt in terms of taste I was very happy. The crust had a nice crunch and the bread was moist and definitely moreish with that distinctive tang. There's still room for improvement, especially when proving as it was a little too heavy in texture, the starter could do with a boost maybe and I could also reduce the salt slightly but with time and tweaking I think I can only get better at baking sourdough. It's just simply satisfying to eat something that you have taken time and care to create, I just hope my heating bill doesn't make me weep too much at the end of the month. 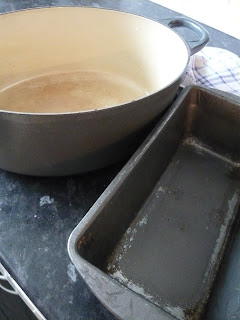 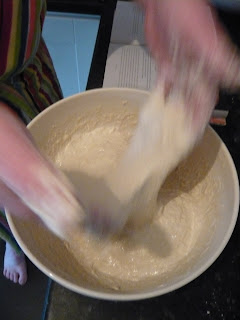 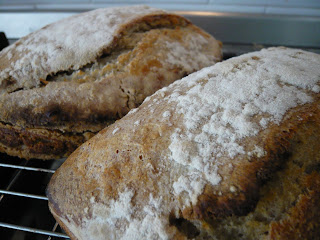 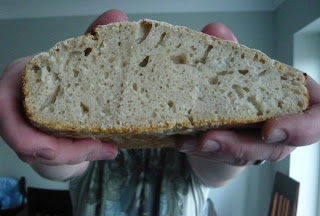