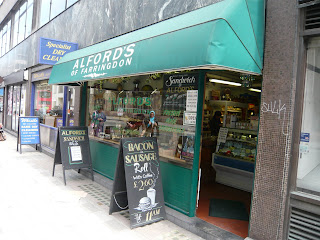 Alford's of Farringdon
It may have escaped your attention but this week is British Sandwich Week and this year the British Sandwich Association have been trying to hammer home the message that during this country's difficult financial climate, the humble sarnie remains a symbol of strength and resilience and therefore should be celebrated. You may take away our jobs, homes and access to easy credit but you will never take away our ham and tomato sanger. And why not, after all we introduced this magnificent culinary concept to the world, well some bloke called Earl did anyhow. However, behind all the pomp and circumstance, some voices are expressing concern as the BSA largely represent the interests of the commercial sandwich industry, the companies that are responsible for filing our high street shops and supermarkets with your average, non-descript, flavourless, pre-packed sarnie. People like Mr Browners of Sandwichist fame for instance, who in their own words are "frustrated with the way the sandwich scene is in the UK. Our high streets are full of generic sandwiches wrapped in plastic having been made in an industrial unit in Slough. The organisation behind National Sandwich Week seems to be perpetuating this. I think we need to take a stand and support independent sandwich makers.". With this rallying cry on the London Food and Drink Bloggers website , he has called upon fellow bloggers to seek out their local independent sandwich shop and review a typically British sanger in an effort to create a stir and send out the message "Tescos! We will not take this crap anymore!"

After reading this call to arms, I immediately thought Alford's of Farringdon, a delicatessen situated funnily enough on Farringdon Road which is close to where I work and a rare jewel in an otherwise desolate thoroughfare. There are several things I like about this place, the first being that at lunchtimes it's always busy which is a good sign and because it's busy, you get to oggle loads of foodie goodies whilst queuing up. As well as selling freshly made sandwiches, meats and cheeses, they have a great selection of pickles and preserves, I've often found myself jumping out the line to pick up some jar of strange chutney before leaping back in. The service is also very good, speedy and efficient. The proprietor in particular, Mr Keith Alford is always very polite and addresses you as "Sir" or "Madam" which is slightly at odds with his appearance as he sports impressive tattoos completely covering his arms and could easily pass as a Hell's Angel (maybe he is, at the weekends).

So I popped down there yesterday, a man on a mission to get myself a typically British sandwich to review. Whilst marching down, I was trying to think of different combinations but kept coming up with fairly run of the mill stuff, the aforementioned ham and tomato, egg and watercress, cheese and piccallily before stumbling across the idea of a haslet and Branston pickle sandwich. "Yes haslet", I thought whilst waiting in line, "that'll be good, made from the leftover bits of pig like the entrails, cooked and compressed into a faggot-type meatloaf and sliced, that appeals to the British appetite." Except when I came to be served, I was told that they hadn't any in that day so I had to make a snap decision and asked for the Sandwich of the Week instead. When you've got the weight of hunger from people behind bearing down, you don't want to mess about at the counter gibbering like a fool. Which is how I ended up with a very Italian inspired Roast Ham, Mozzarella, Tomato and Pesto in Herb Focaccia. Not very British at all, bugger. 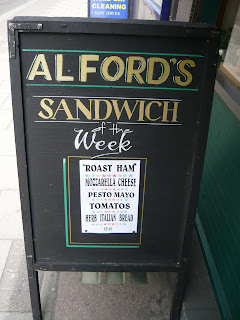 Sandwich of the Week

On leaving the shop, I was quite disappointed with myself but as I walked back to work, I had flash of genius, why not take the sandwich down to the river so that I can photographise it using the London skyline as a backdrop. "That will give it some context won't it?" I thought, after all London is the capital of Britain*, surely such an image will highlight the majesty of the sanger! And so I hot footed it off down to Blackfriars Bridge. When I got there, I proceeded to set up my shot, placing the sandwich tentatively on the bridge wall and took a step back to try and get a decent panoramic shot. And that's where my idea immediately fell to pieces as out of nowhere, like a scene from 'The Birds', dozens of pigeons came flying in to take a piece of Mediterranean bap. After much screaming and frantic waving of arms, I managed to retrieve my sandwich unscathed and feeling rather foolish decided just to go find somewhere quiet, sit down and eat the damn thing. And of course it was delicious, there was a generous helping of ham, the mozzarella was soft and creamy and the pesto gave a nice streak of garlic and salt. I must admit the tomatoes themselves were a bit tasteless but the bread was nice and not overly oily. 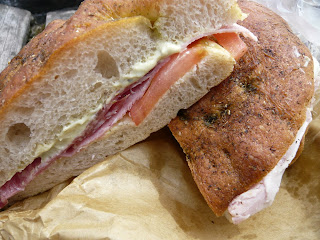 At the end of the day, even best handmade efforts from home don't beat proper freshly made sandwiches and really you're only going to get that from an independent shop like Alford's of Farringdon. So next time when you set off for lunch break, give those cardboard wrapped rubbery excuses a miss and get down to a proper sandwich shop. Just watch out if a pigeon starts following you back. 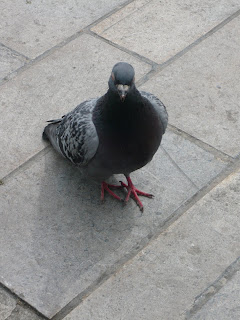 Get away from my sanger, fool

* OK it wasn't genius, I was flying blind

Hollow Legs said…
Your post made me laugh out loud.

I love sandwiches, but I regard them as a snack rather than a proper meal.

Browners said…
Top stuff! Thank you so much for this. I'm now looking forward to writing it all up. Love the pigeon. I reckon the iconic London sandwich could well be a pigeon sandwich...
13 May 2009 at 17:17

Dan said…
Excellent post Dan. I wish I was as inspired to take a dramatic sandwich shot for my sandwich week post - but it was taken on the empty desk next to mine in my rather drab office - I couldn't have done more to make an excellent sandwich look unappetising. But - at least the birds didn't almost eat it! By the way - thanks again for the Wild Garlic. Top Man.
13 May 2009 at 20:07

Browners said…
Love it. The Sandwichist post is now live on Londonist.

meemalee said…
"a rare jewel in an otherwise desolate thoroughfare"

Unfortunately Flaneur has gone into administration which is a real shame because I loved that place. And it looks like Alfords and lots of other shops will be closing soon as a result of the new Crossrail development, bad times really.

meemalee said…
Aaaargh - no!!! Shows how long it's been since I've been down that end of Farringdon Road :(

And that's such a shame about Alfords - my husband and I were standing outside it just last Ssturday, admiring the old-fashioned sweets in the window ...
5 June 2009 at 22:19

Maisie Layla said…
Nice post. Thanks for sharing this wonderful information. best sandwich shop in london some good write ups. like to see more from you.
22 December 2017 at 10:19