After hearing the recent revelations of Jamie Oliver's cock-ups in the kitchen it got me thinking about my own misdemeanours behind the stove, not that I've ever steamed my own sausage mind. I did once attempt to do a barbecue wearing nothing but a jock strap but was promptly frogmarched back into the house, told to get dressed properly and to stop scaring the neighbours. That was the closest I've ever got to cooking au naturel but there have been plenty of other incidents.

Like the time we were housesitting my brother-in-law's flat and I had lovingly prepared a meal for my wife. When it came to plating up, the chicken breast that was perched on the edge of the fish slice I was using had the gall to fall on the floor. In a fit of fury I lashed out at the offending piece of chicken with my foot, missed and firmly planted it into the dishwasher leaving a massive dent. That took some explaining to do.

Our Imperia pasta machine in particular has been a nemesis of mine. On various occasions I have nearly thrown it through the kitchen window, apoplectic with rage as the ravioli attachment ruins yet another batch by bursting my butternut squash and ricotta filling all over the counter top. And even when I do successfully make tagliatelle, you can always guarantee that I don't leave it to dry out for long enough so that when I do plop it into a pan of boiling water it comes out resembling some kind of pasta basketball.

And of course thinking about it I have burned myself, plenty of times. Normally on the handle of the frying pan for instance that I've carefully taken out of the oven with a tea towel, put to the side, turned to chop something up and then returned to the handle sans tea towel. The crazy thing is that it can sometimes take a few seconds to register what is going on. "Hmm this feels strange, what is that sensation? OH GOD MY HAND ON IS FIRE, MY HAND IS ON FIRE!" and then clang, the pan drops to the floor. I really must go to the doctor to see if he can tell whether my neurons are firing fast enough.

More often than not though disasters in the kitchen arise simply because I have neglected to read recipes through and have forgotten to buy key ingredients. I recently bought "A Year in My Kitchen" by Skye Gyngell for an absolute bargain in a bargain bookshop and after skimming through the beautiful photography and mouthwatering recipes, decided that I should try her recipe for Baked Aubergines with Tomatoes, Tarragon and Crème Fraîche so I raced to the shops to get all the stuff I needed. Hopscotching happily into the kitchen, I set everything up and get to work. I take the aubergines and it's slice, slice, slice. Grab the tomatoes, chop, chop, chop. Smell the tarragon, like all the contestants on Masterchef do, hmm what an aroma, sniff, sniff, sniff (I am waiting for the day when they film someone smelling an egg on MC at Borough Market). OK now lets make that crème fraîche sauce. Crème fraîche? Where's the fricking crème fraîche? And so I frantically search through the bags, can't find the crème fraîche, check the receipt and see that despite being a key ingredient and in the title of the recipe, I neglected to pick some up. What an idiot.

However I like to think of myself being the resourceful type and have a rummage through the fridge and find some natural yogurt. "Yes yogurt, that will do, you find it pretty much down the same isle anyway". To make the sauce I need to heat the crème fraîche, sorry yogurt, up to boiling point, reduce and then add chopped herbs including the tarragon, plus some parmesan so I empty the pot into the saucepan. It pretty much splits straight away. "You idiot, why did you use yogurt, I knew that would happen (no I didn't), crap, crap, crap!"

At this point I start to feel all precious and despondent and can barely contain a tear from falling down my face when my wife, ever the voice of reason, pipes up and says "why don't you just make a béchamel sauce and use the herbs in that?". "But that's not how Skye would do it" I whinge. "Go on, I'm sure it will be lovely" she coos and so I duly pull out some flour and butter to make a roux and then slowly add some milk, stir till it thickens up and then add the herbs and cheese. I pour the sauce over the top of aubergines which have been griddled and tomatoes which have been simmered down, which have been placed within a shallow dish and bake in the oven for 30 minutes. Of course it tasted delicious especially with lamb steaks as recommended in the book, cooked medium rare.

I suppose the moral of the story here is to keep a calm, clear and improvisational head when cooking as these little incidents in the kitchen will crop up all the time, even to the professionals as Jamie's tale testifies. Although when a fella burns his old chap that's something to really cry about, not the fact that he forgot to buy the fricking crème fraîche in the first place. 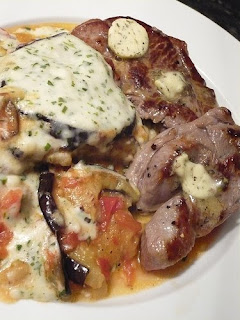 The plate of food in the photo looks gorgeous, small observation - Surely that should be a creme fraiche based sauce?
;)
29 May 2009 at 11:34

The Ample Cook said…
I agree with Dan - very entertaining post and yes, that has been me on many occasions. Never forget the booze though, funny that....
29 May 2009 at 13:44

Anonymous said…
I was just thinking about investing in a pasta machine on my next payday - don't think I'll bother after reading about your "pasta basketball" this post is too funny! The final dish looks very tasty and your wife is clearly a most sensible woman. Shame about that dishwasher though...ouch!
3 June 2009 at 22:32