I am acutely aware that I haven't been paying much attention to this blog lately, mainly because I haven't done much in the way of cooking recently and mainly because I've been getting people to cook for me for Where's My Pork Chop? I plan to remedy this over the next few weeks by rustling up some old favourites at home, by visiting the miserable old gits down the allotment and by reporting on some trips and adventures I've been on lately. So I thought I would kick off with an example of the kind of cooking I do best, the kind where you have to do bugger all but just sit and wait. You know highly technical stuff.

I discovered the delights of Rendang Curry after finding a copy of The Essential Asian Cookbook in the bargain bin at WHSmith quite a few years ago now. It was probably one of the first cookbooks I ever bought and it's been a great companion over the years. It's pretty concise in it's coverage of the different cuisines of the East but there's a little bit of something for everyone and most importantly it is very easy to follow. The great thing about this curry is that it improves with flavour should you leave for it alone for a day or two. In fact I'm a great believer in leaving food to stew for a while after you've made it. Make a great big batch load of spag bol and serve up a couple of portions for dinner that night and put the remainder in the fridge (once it has cooled down of course). When you return to it the next day, it will taste miles better. The same goes for casseroles and soup. And with Beef Bourguignon, it's an absolute must. Of course some food stuffs do not benefit from this process. For instance many, many years ago, my friend Matt discovered at Reading Festival a pack of bacon in his rucksack that was plainly left over from his jaunt to Glastonbury a couple of months previous. As it was unopened and bizarrely enough, still looked to be in pretty good shape, he decided to open it and fry it on his Trangia. He then whacked it in between two slices of bread for a good old fashion bacon sarnie and said to our amazement that it still tasted pretty good. About an hour later he promptly threw up and spent a good day with his guts in turmoil. Matt is a vegan now.

Still stupid stories about stupid teenagers aside, on with the rendang. This is quite a rich dish due to the amount of coconut milk used but the slow-cooking process used creates a fairly dry curry. As the viscous sauce evaporates, the meat, beef in this case, takes on complex notes of flavour which intensify the longer you leave it . Also the original recipe instructs that everything be cooked in one pan on the hob over an hour and a half but when I made this the other night the beef didn't quite melt in the mouth. So it may be beneficial to braise everything in a casserole dish with a tight fitting lid in the oven on a low heat, say 150c, for a couple of hours to really tenderise the meat. If there is any liquid left, then you can finish it off on the hob when you are ready to eat it.

We had this last Saturday, as I made it early on the Friday morning. I served up the rendang with some festive rice (cooked with turmeric, coconut milk, garlic and ginger) and some bok choi which I steamed to within an inch of its life such was I hooked on this concept of slow and easy cooking, dopey sod that I am. Still the curry was delicious and even if it did resemble dog poo somewhat, the hot, sweet and sour flavours from the chilli, tamarind and lemon really did kaleidoscope on my tongue. Overall a great meal to get ready for the weekend if you fancy a lazy one.

1. Take the onions, chillies, garlic, ginger and a couple of tablespoons of coconut milk and blitz in a food processor/blender until you have a smooth paste.

2. Heat the oil in a large pan and add the paste along with coriander, cumin, cinnamon, turmeric, chilli, cloves, lemon peel and chunks of beef. Stir so that the meat is nicely coated and then add the rest of the coconut milk and bring to the boil before reducing heat to a gentle simmer. Cook for 1 and half hours, stirring every now and then.

3. When the oil begins to separate from the sauce as it reduces right down, add the lemon juice, brown sugar and tamarind paste, stir through and take off the hob to cool. Leave for a day or two in the fridge before reheating and serving. 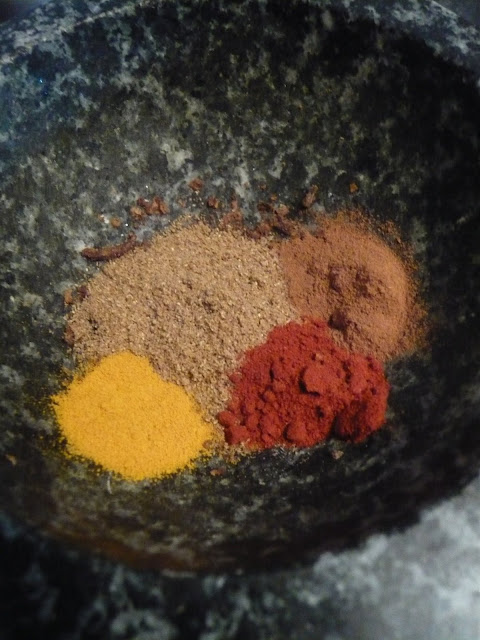 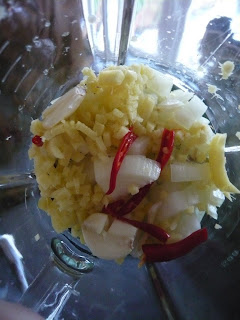 Soon to be paste 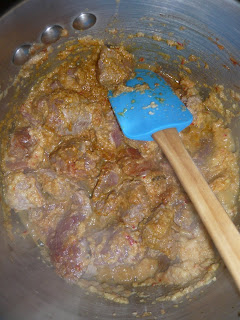 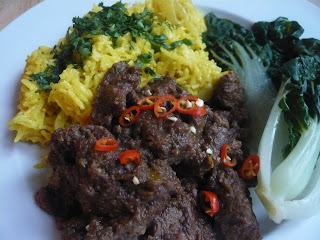 I promise you this is not a dog turd sprinkled with red chilli and that it really does taste rather good
Labels: beef malaysian rendang

Becky said…
I've yet to make a Rendang but this sounds fantastic. I love food which improve with age.
7 August 2009 at 15:07

Helen said…
I LOVE rendang and keep meaning to make it when I have time. I have to say though, it does look like a dog turd. Those slow cooked dishes always do!
7 August 2009 at 15:50

Anonymous said…
Oooh, yum. This has been on our list for a while and moved straight to the top having seen it on Rick Stein's programme last night. We couldn't find a recipe in our books though so I'm glad you've posted this, always good to go with a recommendation.

Dan said…
Lovely piece of cooking Dan. Strangely enough, I also have Rendang on the menu this week. I'm cooking a recipe supplied by @Liz_Upton on Twitter - it's absurdly complicated, but she assures me it's authentic. I'll let you know how it gets on - here's hoping it doesnt look like a turd as well.
8 August 2009 at 19:08

theundergroundrestaurant said…
I didn't understand what you meant by the challenge on your other blog...
I think any dish with tomato in the sauce improves by being left overnight...curry, spaghetti sauce, aubergine parmesan also dishes such as clafoutis are better the next day.
9 August 2009 at 10:52

The Ample Cook said…
Naughty doggy! Hope you rubbed his nose in it ;)