It can get very hectic in our house at times as you might expect having twins around. Even more so now that they are walking around and are into everything. And I mean EVERYTHING. Each day is a barrage of "No, don't touch that", "Leave that alone", "Please stop kissing the cat's bum" and "Oh my god, he's drunk the fish sauce from the fridge". Exhausting. Which is why I have embraced that technique developed by fathers across the world, the act of disappearing to the toilet when the going gets tough. Yes the secret is out. You must remember your Dad doing the same. It's Sunday morning, you and your little sister are running riot, throwing Lego at each other and off he would pop to the lav with a paper tucked under his arm. "See you in a few hours love" he would say to your Mum, patting her on the shoulder. Ha, you thought he was off for his morning constitution didn't you? Well OK yes he probably was but he was also going there for some peace and quiet too. And I've started doing the same. Except I take a cookbook into the loo with me.

It's a indecently gross thing to admit but there's something quite pleasurable about planning your next meal whilst evacuating your last and I have gained much inspiration whilst sitting on the throne. I would never admit this to my guests but lots of my dinner party menus have been formulated in the bathroom. Friends and family who read this now may have second thoughts about ever eating in my house again but I can assure you, I am scrupulously clean. When washing my hands, I use a nail brush and everything! One of my favourite books I like to take in with me is Stefan Gates' The Gastronaut which is not only a recipe book but also a compendium of adventures in food with some rather bizarre information and facts. It is also very funny albeit with a certain schoolboy humour, especially when he focuses on bodily functions which might not be everyone's cup of tea. However, as you might gather from the overall theme of this post so far, I find him hilarious. 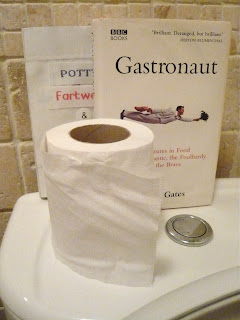 There are many outlandish projects and recipes in the book that I would like to try out such as staging a Hawaiian Imu in my back garden for which Gates provides detailed instructions. This very basically entails digging a massive hole in the ground and then throwing a tonne of wood and heavy scrap metal into it and setting the lot on fire. Once the flames have died down and the embers are glowing red hot, you can then place huge cuts of meat or even a whole animal (pig, lamb etc) wrapped in damp sheets into the pit, cover with earth. You then return hours later, dig the lot up and gorge yourself on a carnivorous feast. This is just a brief overview but like I said, it's definitely something I want to do for a birthday or anniversary in the future. In the meantime, I recently decided to have a go at one of his more manageable projects which was his recipe for Ten Hour Roast Lamb.

The premise is very simple, take one leg of lamb, place in roasting tin with some chopped carrots, onions, garlic and water, cover and then bung in oven at a very very low temperature for 10 hours. I did stumble over two little points though, the first being at what temperature should I set the oven, how low exactly? Mr Gates didn't specify so I threw out the question to the twitterverse and the general consensus came back with 100c. Hoorah for the internet! The second point that caused me to frown was Mr Gates assertion that to get the best from this technique of slow cooking, you should baste the joint every half hour, using an alarm clock if you had to. "Sod that" I thought, I've got better things to be doing so I opted for an hourly baste. This then left plenty of gaps to chase little people around the house, do the washing, feed little people, mow the lawn, change little people's nappies and grab some quality time in the loo before my parents came over for Sunday dinner. What follows is a pictorial representation of one leg of lamb's journey roasting gently throughout the day. The lamb was English West Country, part-boned from Waitrose by the way. 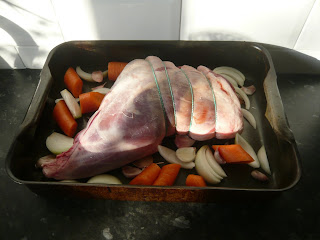 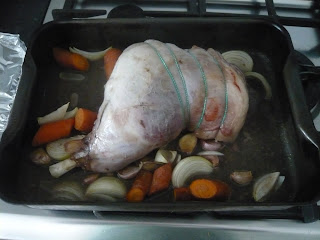 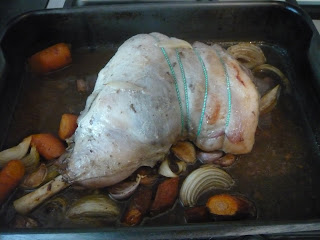 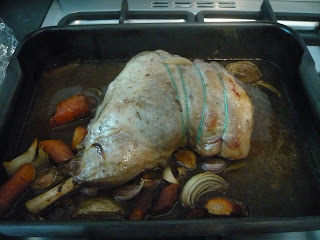 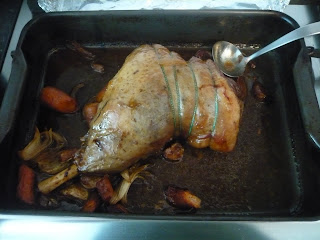 2PM - getting tangoed now (wouldn't look out of place at Lakeside), dribble starts to run down chin 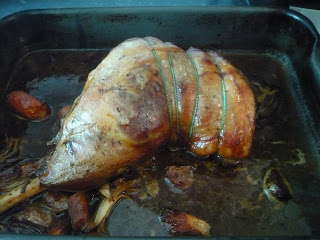 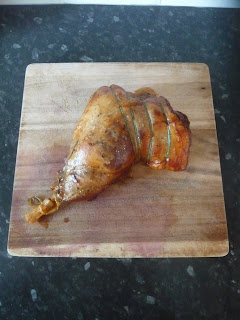 5PM - and it's out, eat, must eat now
Given that the sense of smell plays an important part in preparing the mind and body for eating and digesting, this long and drawn out exercise was agonising. By noon, the whole house reeked of sweet ovine goodness inducing a state of hunger that bordered on the delirious. Every time I went to baste the bloody thing, I'd stare down at the joint, open mouthed and get those embarrassing jets of saliva squirting from my mouth (you know, like you do when about to chomp down on a juicy beef burger). Still I was fully aware that I should try to hold back and not go too crazy on snacking throughout the day. It would be no good to get to the end of the journey and find myself stuffed full of cream crackers and cheese, twiglets, bananas, ham sandwiches and a whole tub of Onken Wholegrain Peach Yoghurt. Which of course was exactly what I managed to consume throughout the day.

So what was the verdict after all that effort and considerable torment? Well to be honest I have to say that the lamb didn't come out as tender as I expected. Yes it smelt fantastic, orgasmic even but after shovelling the first forkful into my mouth, an audible wet balloon fart went off in the back of my head. Everyone else at the table said it was beautiful but I was expecting a melting tender texture in the meat, like what you get from a good kleftiko for instance. And well, this lamb to me just seemed too tight given the very long cook. Nevertheless, we all polished off our plates anyway. I was so hungry that you could have put Charlie Chaplin's boot in front of me and it would have been scoffed in an instant. Then, later on in the evening a funny thing happened. I went back out into the kitchen and reached under foil which was covering the remnants of the lamb and placed a piece in my mouth, just to make sure. And well it pretty much dissolved on my tongue. Then it dawned on me, just how long did I let the leg rest for? Er for about a minute I think and there lies the rub. Never underestimate the importance of leaving meat alone to relax once you've taken it out of the oven, no matter how ravenous you may be. A joint this size would have probably benefited from 20 mins resting time at least. After 10 hours of cooking and drooling, it must take someone with great will power and resolve to manage that. I am no such man. I am weak. I hide in the toilet. 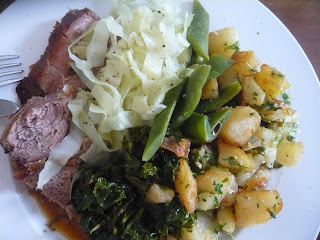 Never used to rest meat when I was at uni (yes I cooked roasts at uni) but when I first tried a few years later, was an ABSOLUTE convert. Now do it however hungry I am. :)
11 September 2009 at 09:49

Anonymous said…
We cooked a slow roast shoulder on Sunday and it drove me mad. I love slow roasted meat but, like you, I find the wait agonising. Next time, I'm going to put it in the oven and then go out for the day.
11 September 2009 at 10:08

youngandfoodish said…
Great post, from beginning to end. But, for the sake of your dinner guests, please be advised: there in no correlation between the Shanks in Armitage Shanks and those used in osso buco.
11 September 2009 at 12:33

The Ample Cook said…
The photo of your lamb made my mouth water. Bet the gravy was fab.

Hollow Legs said…
Ewww, on the toilet! I suppose I haven't got any rug-rats to run away from, but... ewww!

I'm surprised that a leg of lamb was specified; usually it's a fattier cut like shoulder that holds up to long slow cooking.

This very evening I cooked some pork belly to serve to guests tomorrow. The smell was maddening and I felt a little delirious.
11 September 2009 at 22:54

Su-Lin said…
I always forget to let meat rest - I'm way too greedy by the time it comes out of the oven. Thanks for the reminder that I should!

I mostly read my my recipe books in the bath for some reason.

That Gastronaut book was recommended to me by someone else recently, I'm going to have to get it.

As for the Lamb, looks lovely - I like the hour by hour photography (Similiar perhaps to my prospective future Gordons Gin experiment).
13 September 2009 at 18:00

Helen said…
I love Gastronaut! Hilarious. That bit about body excretions is pretty gross though.
13 September 2009 at 20:25

Browners said…
Gastronaught is probably my favourite book ever. With that in mind tomorrow's WMPC should be interesting...
14 September 2009 at 15:13

gastrogeek said…
You read cookbooks whilst ahem dropping the kids off at the pool?! JESUS CHRIST FU!! There are no words.

I tried to make a slow roast leg of lamb a few weeks ago. I cooked it on a low heat for about 7 hours,it was utterly disgusting. I forgot to cover it so it was like old boot leather. Bleugh!
29 September 2009 at 23:17