Take This Bottle (And Just Walk Away)

There are many reasons for drinking sparkling wine at 9 o'clock this morning son. Mostly poor ones but I'm going to stick by them. I've left things to the last minute you see. I need daylight for optimum photographising conditions and I have to test out this recipe that I've been formulating in my head for the past two weeks, by tomorrow. Deadlines, son. The malaise of modern life, you'll soon learn about them. Don't look at me that way, with your head cocked to one side and frown on your face. It makes me feel bad. Anyway, this is research. Honestly, Daddy doesn't have a problem. If you think I do, don't blame me. Blame this Irish lady I know, it's her fault.

And thus, these were some of the thoughts running through my head when conducting a comparative tasting session in my kitchen early this morning. It's one thing to drink alcohol at such an hour, taking a pause to consider what you are doing before lifting the glass to your lips. However, when your little boy stares up at you whilst clutching his teddy in one hand and a Farley's rusk in the other, the guilt increases ten-fold. But then I thought "what the hell, we never ever do this normally and besides, Mummy seems to be enjoying herself. I better call her later though, to see if she's left the kids at Sainsburys or put an empty bottle in the cot."

Perhaps I should clarify here. Along with the normal bustle in the kitchen at breakfast, I decided this morning to finally try out a recipe I had in mind for a food and prosecco matching competition that is being run by Niamh of Eatlikeagirl. There's nowt better than a challenge and with the offer of a meal at Trinity as a prize, this seemed to be too good an opportunity to miss. Of course, there is the crux of the matter. What dish would go best with prosecco, namely Bisol Jeio Prosecco? I have been racking my brains for the last couple of weeks and even though I've tried some before from Niamh's stall at Covent Garden Market, having walked away thinking "hmm that's nice", I still found it hard to consider what kind of food it would go with. If I were to be honest, I would suggest everything and anything but thankfully my wife's taste buds are slightly more sophisticated than mine. With her help, I was able narrow options down, coming up with this dish, namely a Warm Winter Salad with Pheasant, Pear, Pomegranate and Walnut. Unfortunately, when shopping for ingredients yesterday, I was unable to get my hands on a bottle of the proper stuff but after making some enquiries, I was reliably informed by Dan of Bibendum Wines (who are chief merchants for Bisol in the UK) that I could buy a similar match from a certain supermarket's 'finest' range. So I bombed over to my local one late last night. I hope he hasn't led me astray, still at least I know where he works. Anyway, here is the recipe:

Heat the oil in a frying pan over a medium heat, season the pheasant legs with salt and pepper and and place with garlic and thyme into the pan. Cook for 12-15 minutes, depending on size, turning once. Remove and leave in a warm place. Mix and assemble the salad leaves into the centre of plate, arranging the pear chunks and walnuts on top. Scatter the pomegranate over the salad and around the outside of the pile. Take the pheasant legs which should have cooled slightly and shred the meat from the bone with a fork, taking care to remove smaller bones. Place meat on top of the leaves. Mix the dressing together, seasoning very lightly and drizzle sparingly over the salad and around the plate. Serve immediately.

So how did it fare? Well, considering that I kind of went arse about face with the whole process ie I wrote the recipe first and didn't run any tasting sessions at home with Mrs FU, I was pretty pleased with the end result. There were fairly contrasting flavours and textures with the ingredients used but they blended together well and in my mind at least, complimented the dry fruitiness of the prosecco, particularly the pomegranate. I must say that initially for the salad, I wanted to use dandelion leaves but they would have been too bitter for this dish and plus I would have run the risk of bed wetting tonight (hell, there's always that risk!). I was also very happy with the vibrancy of the dish, having used Farrington Mellow Yellow cold pressed rapeseed oil in the dressing which stood out nicely against the reds and greens. And if you can spot a blatant plug in that last sentence then you would be right. Having received a free bottle of the stuff months ago, I've been trying to work out how to fit it in a post. So there you go, hands up, full disclosure!

As usual, I am digressing in my analysis so its probably best that I stop there and leave this recipe in the hands of the powers that be to decide whether it is worthy or not. With one day to go, the entries are starting to flood in and the others so far have been of excellent quality so may the best man or woman win. 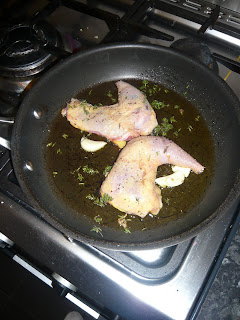 Cor, look at the legs on that game bird 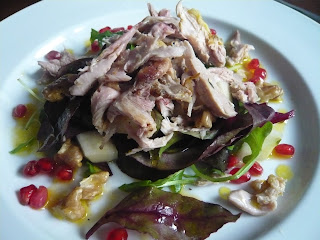 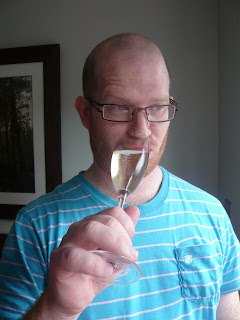 LexEat said…
Yes! The minute I read "pomegranate" I thought - brilliant combo with the prosecco!