Earlier this week, I took out from the cupboard one of my old favourites, the first Moro cookbook, so that I could crank out a couple of my old favourite soups. Its strange but I never ever imagined before that I could get all whimsical about a stained, battered, dog-eared book. Still when I dug it out, it really was like visiting an old friend as I leafed through the pages, looking at all the recipes. In fact I became quite nostalgic sitting at my kitchen table reading it and remembering all the meals cooked, the highs and the lows.

Like making my first paella for instance for my parents and in-laws, just a simple affair with pork, chorizo and spinach but still it was a real hit and a great pick me up after a very sad period for our family. I won't mention the effing chocolate and apricot tart with its effing pastry shell that, well effing crumbled. There was lots of effing and jeffing in the kitchen that day.

And of course I have to thank Mr and Mrs Clark for inspiring me to create my own sourdough starter which I named Veronica and has become like a daughter to me. A smelly, rebellious and somewhat explosive daughter and she's only six months old, god help me when we get to the teenage years. So yes, Moro cookbook, we've had some good times together. If I could I'd take you out for a pint but then I would probably get drunk and emotional and say something like "I facking love you" which would be embarrassing and unbearable for the pair of us. So I won't. It also may be for the best that I stop personifying inanimate objects (which I am doing far too much of lately) before the men in white coats arrive. So I shall proceed to talk about the soups, namely Chestnut and Chorizo and Beetroot with Black Cumin.

In my opinion these two soups are seasonal smashers, perfect for coming home and making on cold, autumnal, grey days. Thick, warm and comforting, a bowl with a hunk of bread easily provides enough for an evening meal to enjoy in front of a roaring fire or 2-bar electric heater. The chestnut and chorizo has always been a particular favourite not just for it's spiciness but also because the recipe instructs you to mash everything up by hand with a potato masher. The resulting texture of the soup is immensely satisfying as you bite into small soft chunks of cured paprika sausage and velvety chestnut pieces. Although I must admit, this time around the beetroot soup was even more of a revelation. I had made this last year using beets grown on the allotment which were rather large and as a consequence gave the soup quite a prominent earthy flavour. The beetroots I used this time were small and still quite sweet and gave far better results, letting the nutty element from the cumin seed come through. I also included garlic yoghurt and chopped parsley as instructed this time around (which I left out when I made it last) and again this added a lovely middle-eastern touch that is Moro's signature. I've been adding garlic yoghurt to a lot of dishes lately, I bloody love it. Whether it goes well with muesli remains to be seen but I might just try it. And on that tangent, I give you the recipes:

In a large saucepan heat the oil over a medium heat. Add the onion, carrot, celery, chorizo and a pinch of salt and fry for about 20 minutes, stirring occasionally, until everything caramelises and turns brown. Add the garlic, cumin, thyme and chilli and cook for 1 more minute, followed by the tomato and chestnuts. Give everything a stir and then add the saffron-infused liquid, the water and simmer for about 10 minutes. Remove from heat and mash by hand until almost smooth but still with a bit of texture. Season with salt and pepper.

Heat the oil in a large saucepan over a medium heat. Add the onion and a pinch of salt. Cook for 10 minutes, stirring occasionally, until the onion begins to colour. Now add the garlic and cumin and cook for 2 more minutes to release their flavour, followed by the beetroot and potato. Pour in the water, bring to a gentle simmer and cook until soft, about 15 minutes. Place the vegetables and cooking liquid in a blender or food processor and blend until just smooth. You may need to do this in two stages. Return to the pan, add the vinegar, half the parsley and salt and pepper to taste. You may need more salt than you think to balance the acidity of the vinegar. Serve with a little yoghurt on top, the rest of the parsley and an extra drizzle of olive oil
. 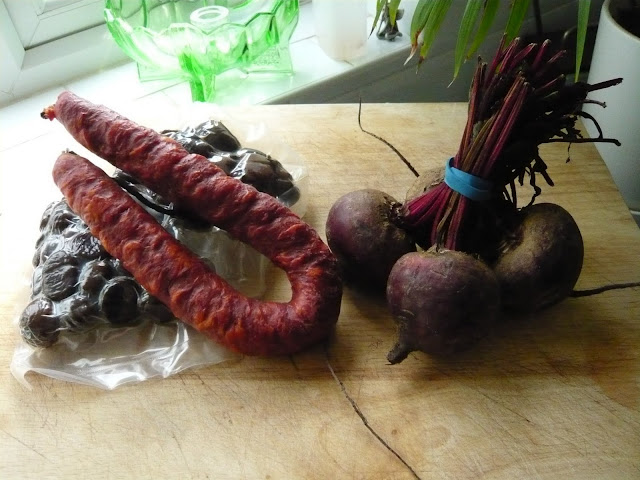 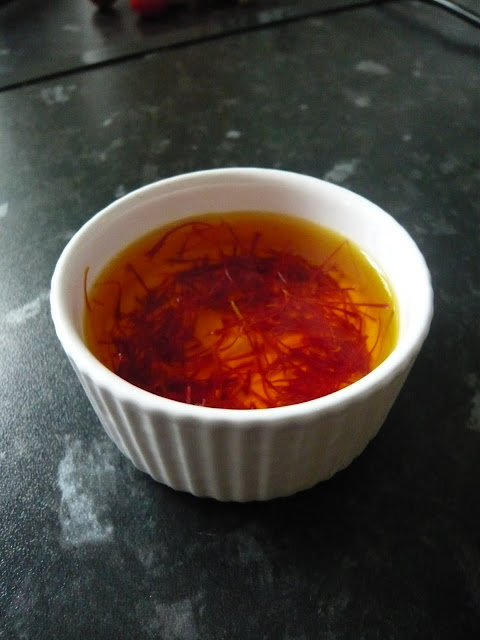 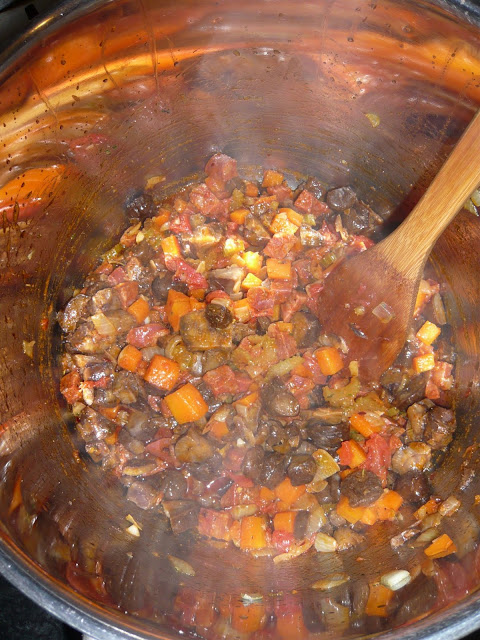 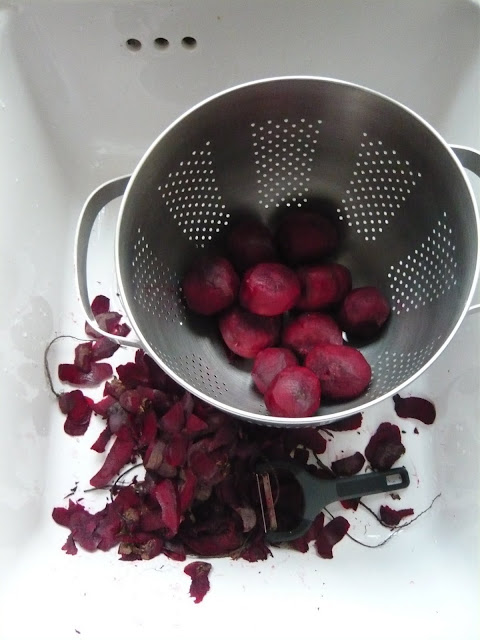 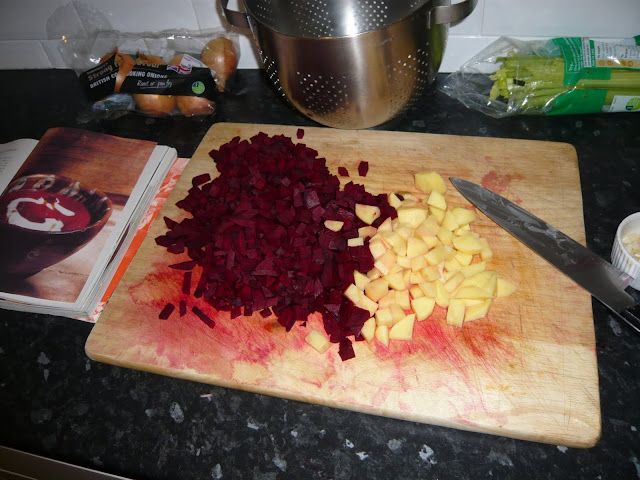 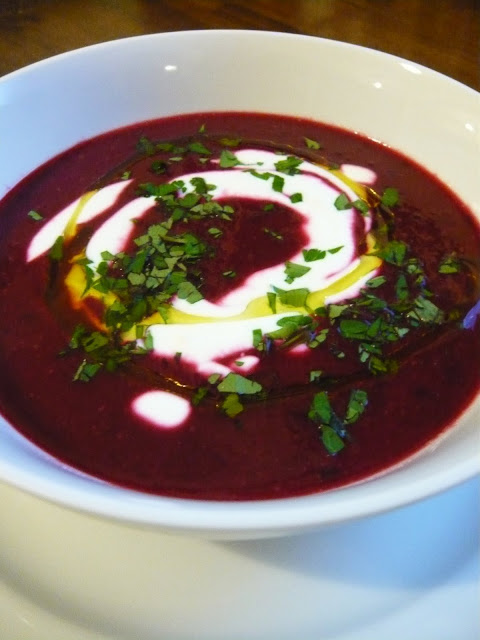 gastrogeek said…
ooooh gorgeous, even if you are a potty mouth. Perfect for these nippy evenings and I do love the combo of beetroot and cumin and yoghurt and garlic.
16 October 2009 at 08:31

The Ample Cook said…
Ooof that chorizo and chestnut one looks and sounds delicious. I bet it improves with keeping too.

Did you use rubber gloves to peel the beetroot or were you all butch and manly showing off your pink hands as a badge of honour? ;)
16 October 2009 at 08:36

Kerri said…
These both look lovely, particularly the beetroot (even though I'm terrified of it).
16 October 2009 at 10:46

BribedwithFood said…
Interestingly (well, for me) I have recently been given the book and was going to try the chocolate and apricot tart.
Following your recount of the effing incident I will save it for a day I'm feeling particularly happy with the world.
16 October 2009 at 13:47

Anonymous said…
I can smell your chorizo & Chesnut soup just by looking at the pictures. That is something that will warm you up!
16 October 2009 at 13:54

Dan said…
What's this I see? an Non WMPC post? do my eyes decieve me?

Ahhh the Moro cookbook - also an old friend of mine. Ive cooked loads of stuff out of it, and the second one 'Casa Moro' but sod all out of 'Moro East' which for some reason I found less inspiring. Perhaps I need to go back and read it again.

Never cooked these two recipes, but they look lovely, very well made and also makes me think - your eating everyone else's food - but no ones eating yours.

LexEat said…
Beetroot soup looks gorgeous! Definitely going to try that one - thanks!
16 October 2009 at 22:49

Helen said…
Oooh lovely sounding soups! I can't get enough of beetroot, love it. I too adore the Moro books. Have you ever been to the restaurant?
18 October 2009 at 18:27

Food Urchin said…
Gastrogeek - I am a potty mouth, that I can't deny. You should try the beetroot, it's fucking gorgeous.

The Ample Cook - No girlie rubber gloves for this man, I show my pink pinkies with pride.

Graphic Foodie - I was very happy with the result this time, it looked a lot more vibrant than past attempts.

Bribedwithfood - pastry really isn't my thing I'm ashamed to admit, I should leave it alone really. I swear like a trooper at the best of times.

Mathildes Cuisine - it definitely is a warming soup, to be mopped up with crusty bread definitely.

Dan - I'm liking this idea a lot, I shall be in touch to organise, you lucky lucky man!

Helen - The Moro books are Souper dooper in my opinion, I have been to the restaurant, a while ago now but really enjoyed it. Time to make another visit I reckon.
19 October 2009 at 22:58

Browners said…
Cracking stuff. Have you ever tried serving two soups side by side in the same bowl? If you use contrasting colours it can be a lot of fun.
20 October 2009 at 00:07

Urban Foodie said…
Made the beetroot one at the weekend, smashing with the garlic yogurt! And it looks so fantasic in a bowl, like liquid jewels.
6 November 2009 at 12:48