Today I finally got around to making my Christmas puds after much dawdling about. If you didn't know, Stir Up Sunday was actually two weeks ago. This is the day that you should have pulled all your musty dried fruit, dessicated suet and flour containing weevils out from the back of the cupboard and set about creating your stodgy, gutbusting dessert that traditionally completes the marathon that is Christmas dinner. If your household is anything like mine, then a trip up to the off license would have been necessary. Newly purchased brandy seems to evaporate in our house. I don't know how, it just does. But why should you worry about making your puddings roughly six weeks prior to the main event? Well if you abide by the good ol' Anglican church (cake or death?) then Stir Up Sunday is the last Sunday before the season of Advent, with its origins in a prayer for the collect that day. It goes something like this "Stir up our puds Oh Lord, so that we shall faithfully overindulge and bring forth plenteous gas and heartburn, rewarding us with arguments over the remote control and physical violence because for the second year running, John has managed to get Mayfair and Park Lane, the b*****d". Or something like that, I didn't really pay attention in Sunday School.

I missed the boat that day, mainly for reasons of apathy and general stroppiness due to the fact that I wasn't quite ready to get into the Christmas spirit, not in the middle of November anyway. Also I think the actions of my neighbour put me in a sour mood too. The rain had been thundering down all morning with more than a touch of gale force winds buffeting trees and fences. It was truly a horrible day and yet as I looked out of my living room window onto the street, I spy this maniac (my neighbour) on his roof desperately trying to secure his Christmas lights to the front of his house. OK, each to their own, if you want to light up your property like a gaudy amusement park in some desperate attempt to show the world that you are fun and not the boring prat that you really are, then go ahead. Sod the planet and your electricity bill. But of all the days to do it, when nature is literally slinging it at us. AND in the middle of November. Retreating from the mask and security of our net curtains, I just shook my head and thought "well if you fall off, it'll bloody serve you right". Of course, I felt quite bad when an ambulance, two in fact, turned up an hour later but luckily they were attending another neighbour who had stupidly attempted some DIY, inside his house I should add and nearly put a drill through his head. Phew.

So after all that fun and excitement, I didn't really feel like making my Christmas puds that day, especially in the middle of November (have I mentioned this already?). Oh and I forgot to mention that I didn't have half the ingredients anyway but I was determined to make them this year using a recipe by St Nige. Last year we got our pud's from Aldi, they were good but not as good as my own previous efforts. It's from his Kitchen Diaries edition and I've used it a couple of times now over the years. It really is quite a good one, principally because the resulting pud is fairly light and digestible and you can find it here. I must admit there have been occasions in the past when Mum has approached the table, dining room lights out, holding the dark dome of doom on a plate, ablaze in flaming brandy and thought to myself "oh God, this is it, this is going to finish me, goodbye world". We did have a right result one year though when Mum tripped and split some of the roaring spirit on her person. For a couple of seconds with her hand on fire, she was doing a great impression of Johnny Storm out of the Fantastic Four before letting out a scream and dropping the pud on the carpet. Sorry Mum that you got a tangerine sized blister on your hand that year but hoorah! No Christmas pud! I should add here that Mum's pud is lovely but her Christmas dinners are ridiculously big, hence the fear. Like I said though, St Nige's version is light enough to attempt without any intredipation. Even if you have eaten all the brussels sprouts.

I bought all my ingredients with the intention of making this last Sunday but I was erm suffering from jet lag after a trip to Lille (which I shall post about soon) so it had to wait until today when I was finally compos mentis to simply mix together the ingredients and steam for 3 and half hours. I have, however, been soaking the mixed fruit in French brandy for quite a while, adding little extra tots throughout the week and leaving in the fridge. St Nige's recipe only calls for 150mls but I've managed to throw in the best part of a bottle so the sultanas, figs, apricots et al are now well and truly smashed. Every time I open the door, there has been a little chorus of "show me the way to go home..". Well in my imagination anyway. How this fairs for eating on Christmas Day remains to be seen. I can only hope I remember in order to report back. 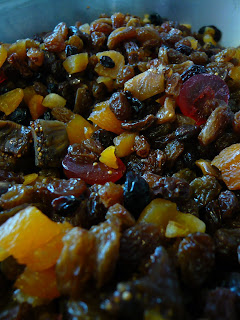 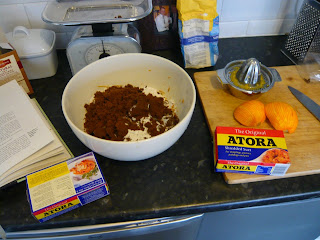 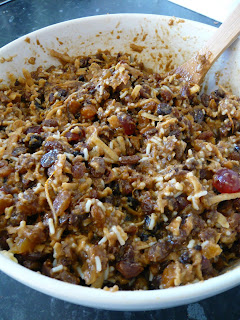 Lighter than your average Christmas pud 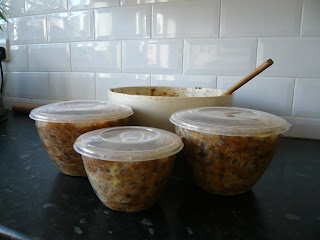 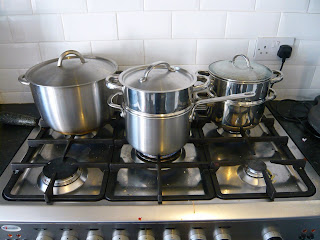 How to create a mixed spice sauna in your kitchen
Labels: Brandy Christmas Pudding Stir Up Sunday

Margit said…
Ha, would love to see your global warming promoter-neighbour's house. Maybe you could twitpic it sometime... Now, please don't kill me for this question, just treat me like a slightly idiot child that needs to be indulged... But why IS it that Brits use suet in that recipe? What's wrong with a nice piece of butter? Suet, as far as I'm concerned, should be seen (in bird-feed) but not eaten... ow, ow ow.. .told you not to hit me:)
7 December 2009 at 10:31

goodshoeday said…
Liking the sound of the sloshed fruits - I'm doing similar with my Christmas cake this year, but with whisky as its a variation on Dundee Cake, I mean 150ml doesn't sound anything like enough.
How many people are visiting that you need THREE puddings :0

Um Margit it wouldn't be Christmas Pudding if there was no suet in would it?! It's the heritage of the fact the pudding used to contain meat (like mincemeat did) so without the suet its not really following its heritage.....
7 December 2009 at 16:09

LexEat! said…
Wow, I made mine about 4 weeks ago - it may have still been October!

I could only manage one - very impressed (and jealous) you made 3!

Will you eat them all this year? My mum makes 2 puddings, but only every second year and one sits in the fridge an entire year for the following xmas - still tastes great!
7 December 2009 at 18:10

G said…
We've left it really late this year and will be doing it this Sunday. Always make two - one to my parents and one to my girlfriend's parents.
10 December 2009 at 12:30


We bumped into your blog and we really liked it - great recipes YUM YUM.
We would like to add it to the Petitchef.com.

We would be delighted if you could add your blog to Petitchef so that our users can, as us,
enjoy your recipes.

Petitchef is a french based Cooking recipes Portal. Several hundred Blogs are already members
and benefit from their exposure on Petitchef.com.

To add your site to the Petitchef family you can use http://en.petitchef.com/?obj=front&action=site_ajout_form or just go to Petitchef.com and click on "Add your site"