Many folk don't have much time for Alex James, that lanky, good looking but scruffy bass player from Blur. I read his column from time to time and yes he can spout a load of rubbish from those perma-fag perched lips of his but I still like him. In the interests of research, I came across an old video interview on Word of Mouth recently where Alex was expounding the virtues of cheese making. Wittering on about the difference between music and food, he asserted that on the production scale creating music is "ephemeral, lighter than air, an intangible quantity" whereas making food is "so much more grounding and real". As I said he does talk a load of horlicks sometimes but I am not a musician who has snorted a mountain of Columbian marching powder in their lifetime so can't appreciate where he's coming from. But Mr James' comment on making food or cheese in his particular case, did resonate with me as I have been making little forays into the world of cheese making myself. Cooking at home and serving up a handsome plate that I've sweated over for hours is immensely satisfying but to create a foodstuff, from something raw and primary like milk through some process of strange coagulative alchemy definitely turns things up a notch or two. Yes, I really did feel like a proud father the day I made my very own cheese.

I shouldn't get too carried away with myself though as the procedure was quite simple which I would like to share with you. Inspired by one of my favourite books The Gastronaut, Stefan Gates lays it out nice and easy. To make very basic cheese, soft cream cheese in this case, all you need is full fat milk and natural live yoghurt. Mr Gates does state that unpasteurised milk has the best effect but I just went for traditional unhomogenized whole milk from Waitrose. Pour 2 litres into a sterilised bowl and add 4 tablespoons of yoghurt, cover the bowl with muslin or a tea towel that has also been sterilised and leave for two days in a warm place after whence the mixture will become gloopy and start to separate and curdle. 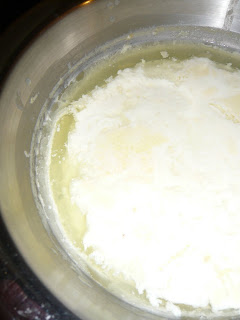 Next you need to preheat your oven to 110 degrees Celsius, skim off some of the creamy stuff that is floating on the surface, leaving the remaining solids underneath intact and whack your bowl into the oven for half an hour. This encourages the curds and whey to separate further. Oh and you should think about using a heatproof bowl unless you don't mind the cats lapping up warm sour liquid as it trickles through your oven door and onto the floor. 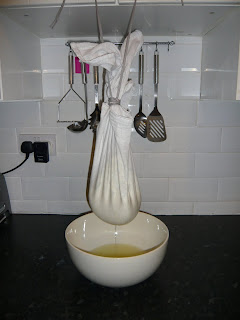 Once the 30 minutes is up, pour the curds and whey into another bowl that has been lined with another sterilised muslin or tea towel. Collect the corners and gather up to form a small stork sack of cheesy joy (and it will be small as a lot of milk only goes a little way with this experiment). Tie the corners together with some string or as in my case, with some laces from a pair of redundant trainers and hang it over the bowl so that the whey be collected as it drip drips down. Place the bowl on your kitchen countertop and attached the bag to a pair of cupboard handles, if at all possible. And then go to bed. 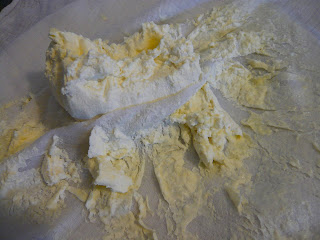 In the morning, as you skip down the stairs to go and check on your newborn, you will discover that it is not quite the attractive offspring you had wished for so it will take a further sandwiching between two plates with a heavy weight on top to smarten it up. As you often have to do with any ugly child. At this stage you may also wish a sprig of thyme or rosemary to add an extra depth of flavour. Leave for just a couple of hours and it will be ready to enjoy with a pinch of salt and some olive oil or some yummy honey. 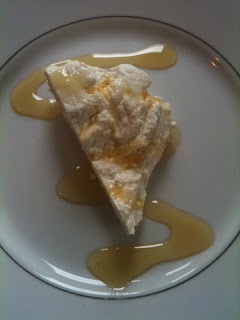 Like I said the first time I attempted this I was very happy with myself. OK so the cheese wasn't earth shatteringly sublime or anything, it was fairly plain in fact but it did have a certain tang and a nice crumbly texture. Coupled with a fanciful drizzle of local honey, you would certainly find me looking rather smug if I ever served this up at a dinner party.

"Oh the cheese? Oh it's just something I made this week"

Of course they do say that pride goes before the fall and the next time I tried to make it, this cocksure patriarch somehow failed in his familial duty to raise a second daughter (I've decided that cheeses are girls in the food world, like sourdough starters). I really don't know what happened. I did everything the same as before but on taking the bowl from out of the oven, I just wound up with more yoghurt. I tasted it and it had definitely turned into yoghurt. It wasn't sour or acidic. It was yoghurt. Two litres of the stuff. And ever since I have been scratching my head. The only thing I can concede is that before I put it in the oven, I noticed that it hadn't separated that much so perhaps the ambient temperature in the kitchen this time around was cooler? Luckily Mrs FU was able to use some of the yoghurt to make Moro's Yoghurt Cake with Pistachio which eased the pain a little but she still catches me sometimes, looking out of the window forlornly, wondering what could have been for that little girl. Perhaps I should get in touch with Alex for his opinion, I just hope he doesn't give me a load of ol' whallop. 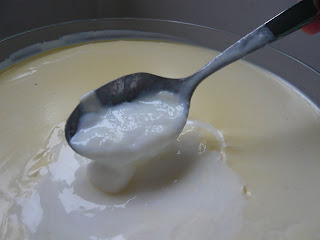 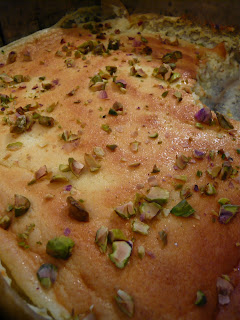 aforkfulofspaghetti said…
1 cheese, 2 litres of yogurt, 1 yogurt cake - I'd call that a result, myself... ;)

Hope the cheese experts around here can help you crack the mystery as to what happened with the second batch
29 April 2010 at 13:29

Catherine said…
I reckon it could be the room temperature - I've found that my kitchen is much cooler now I don't have the central heating on, and my sourdough starter is consequently taking much longer. And I think yoghurt needs a higher temperature (or so I concluded after trying to decide whether refreshing sourdough starter in a yoghurt maker would work).

Mind you, I've done yoghurt in exactly the same way in my yoghurt maker and still the results are different, so it could be anything.
29 April 2010 at 13:33

ginandcrumpets said…
We did cheese and yogurt making yesterday, so let's see if I learned anything that will help.

This recipe is almost identical to the yogurt making recipe we followed, except we heated the milk first to kill off any bacteria in the milk, cooled it to 40C and then added the yogurt and kept it warm (40C) until it coagulated and turned into yogurt (5 hours to overnight).

So it's probably no surprise that you ended up with yogurt the second time. Adding the bacteria (yogurt) and leaving the milk at room temperature (20Cish?) curdles it. If it hasn't really curdled (separated), then sticking it in a low oven is just going to encourage the yogurt making process to continue. It may have just needed an extra day at room temperature to get the milk to really curdle.

Catherine - I am figuring it was the room temp too. Funny how a subtle deviation can affect things.

Helen said…
Brilliant! Excellent work. I also absolutely adore Gastronaut. I'm a bit obsessed with it actually. Must give the cheese a go.
3 May 2010 at 12:16

Food Urchin said…
Goodshoeday - I did. Whether it was enough I'm not sure given that the laces have been in close vacinity to my feet.

Gastrogeek - hmm cheese indeed but can you ever utter hmm.....er yoghurt?

The Grubworm said…
Exciting making cheese isn't it! Those fluttering butterflies in your tummy as you race downstairs to see what's become of your sodden sack of curdled milk.

I made paneer, and squeezed a little lemon juice into the milk before heating it gently - that certainly got it curdling ok.
5 May 2010 at 08:28