There was once a very skinny, odd looking, bespectacled chap from Sheffield who sang a fantastic tune called 'Do you remember the first time?'. Whenever I hear that blast from the past, I can't help but feel the lovely whimsical glow of my yoof, remembering carefree summers of days gone by, dancing in fields and having long curly ginger hair. Sigh. However, nostalgia can be a fickle friend and also heap on liberal doses of guilt and embarrassment as you recall the darker and more unsavoury episodes of your life. As I was walking down towards Westborne Grove, many weeks ago now, I started thinking about the very first time I had tapas. Wandering nonchalantly down Chepstow Road, I am sure I had a big goofy smile on my face which then suddenly morphed into Munch's Scream as those horrible latter emotions came bubbling to the surface. Why? Well it's simply because this area of West London is synonymous with my first experiences of tapas, that wonderfully egalitarian style of serving food. And whenever I am around that part of town, I am reminded of a girlfriend who I treated rather shabbily many, many years ago.

She was a keen, lively girl who pretty much laughed at everything I said and pretty much paid for everything too. Our favourite haunt was the local tapas place down the road from her flat in Maida Vale which was a fairly standard innocuous type of restaurant but it gave me a good introduction to Spanish cuisine. Eating lots of small plates of food seemed very novel at the time and I recall marvelling at the fact that it was always very filling. Patatas bravas, croquetas de pollo, chorizo in red wine, calamares, tortilla and paella. Simple, tasty grub all washed down with a cheap Rioja. As I had the uncanny ability to blow my wages in the first few days after payday, the old flame nearly always picked up the bill. Given that I'd usually pay her back by arriving at the flat at 3AM in the morning, soaked to the gills and banging at the wrong door (she saved me from several beatings), the relationship didn't last. I didn't feel that bad at first when I dumped her but when she came back into the room with a bag of presents she had been saving for my birthday and dumped it back at my feet, well yeah I did feel quite evil. And after all these years, I still kick myself for being an absolute pig but hey these things happen for a reason. What was meant to be was meant to be and from what I've heard she's getting married soon to a guy who is far more chivalrous than I ever was in those early days. I hasten to add that I have changed for the better, if I hadn't I wouldn't be able to boast 8 years of marriage *ducks flying iron*.

Anyway, that is my tapas past so what of the tapas future? Well after shaking off the horrors of my past over a pint in a very gaudy and pretentious pub (which shall remain nameless because I fear the Russian mafia) I joined a group of bloggers for a meal at El Pirata Detapas to celebrate the launch of ViewCard, a new membership scheme which offers discounts in restaurants and bars across the capital. A quick earlier squizz on their website suggested that El Pirata were aiming for a more modern, contemporary approach and this is evident as soon as you walk through the door. No clunky, heavy, dark wooden furniture or bright painted crockery on orange walls with Gipsy Kings blaring in the background for these guys. No they've gone for simple decor with clean lines and an uncluttered ambiance which was refreshing although when I walked down into the private basement room, I did have a Clarice Starling moment. Towards the back of the room, legs of jamon hung behind glass staring outwards and I wasn't sure whether the barrier was there to protect us or them. Just slightly unsettling but then again for a carnivore, I do have issues with meat. 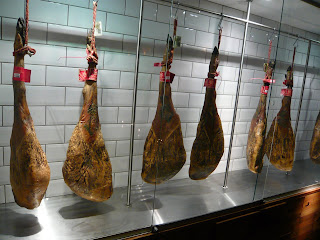 Still the atmosphere was very convivial as we milled about, chatting with a glass of Cava in hand before sitting down to some very tasty olives, alioli and bread. What followed was an impressive selection of tapas which sought to showcase the talents of young chef, Omar Allibhoy who had trained under Ferran Adria of El Bulli fame. You know that place in Spain that everyone bangs on about. Actually I am being flippant there as the majority of the dishes were very, very good with only a couple of duds in the mix. The opening gambits of Octopus Carpaccio with Clementine Caviar, Capers and Paprika and Endives with Valdeón cheese foam were top notch. The octopus was wonderfully tender and I loved the little pops of citrus that accompanied it. The foam was described around the table as "cheesy air" which really doesn't do it credit. I used to have a pet dog who created "cheesy air" on a regular basis. However the whizzed up lightness of salty valdeón with the bitter crunch of endive was an inspired combination. 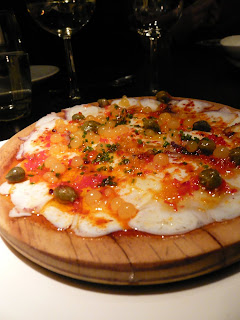 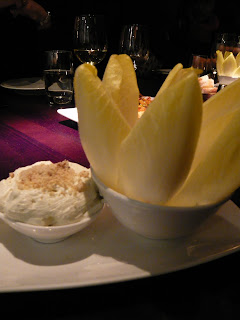 Next up were Seared Scallops with Artichoke hearts and Iberian Bacon, another winning dish simply because I adore scallops, artichokes and bacon, although as I have mentioned on FU before, artichokes do induce in me guffage that rivals my poor and sadly departed dog (I miss you Lucky). The scallop was perfectly cooked, crisp but also slightly underdone, beautiful. 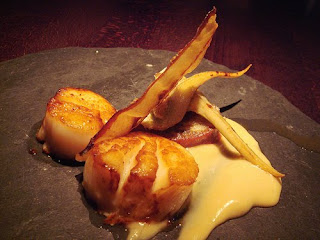 The following dishes of Croquetas with Serrano ham and Pan fried Red Mullet, Confit Tomato and Piquillo Peppers didn't quite hit the spot I'm afraid as the croquetas wimped out on the ham promise and well the fish had just one too many bones. Don't get me wrong, I'm not ordinarily one of those diners who wails at the sight of a pin-sized bugger poking through the flesh of a juicy fillet. But as I said, there were just one too many. Things got back on track with the Pork Cheeks with Braised Shallots and Carrots as the piggy chops were fantastically tender and succulent, I could have easily gone back for more and felt ever so let down as I feverishly scanned the empty plates on the table. 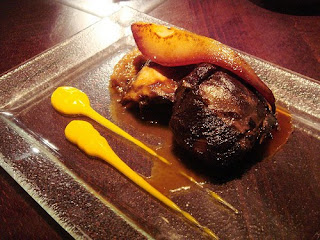 The Broken Eggs, Potatoes, Chorizo and Garlic Prawns was an interesting concept. When it arrived at the table, the words 'Tortilla Tower' kept popping in my head which in turn brought on the dreaded 'Zinger Tower Burger'. I don't know why. Perhaps, it's my off skew imagination and crap business acumen that got me thinking about a chain of Spanish fast food outlets to rival KFC. Either way, I did enjoy this dish, although perhaps the chef over egged the pud with this one. Rectangular plates of Fried New potatoes with Mojo Picón Sauce, a new twist on patatas bravas, were also delivered to the table and they were far too easy to pop in the mouth when no-one was looking. 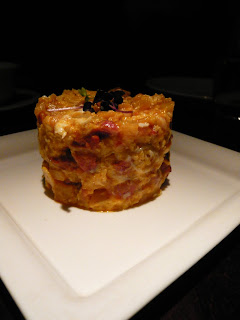 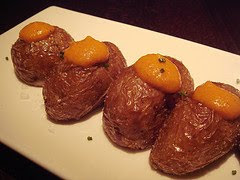 Finally as we headed towards the end of this tapas marathon, out came the desserts and not one but three. Chocolate Trufa, Chocolate Mousse and Saffron Toffee, 2 Textures Crema Catalana and Rice Pudding, Caramazel Crispes. Of course it was a totally overindulgent end to proceedings but what the hell, that's why you punch that extra notch in your belt, yes? No? Oh well sod it anyway, my favourite was the chocolate trufa, very luxuriant, very decadent and very calorific. 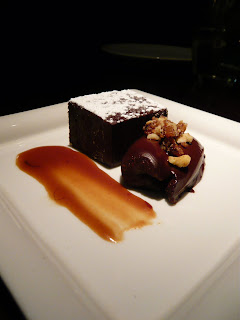 Once we were done sitting there bulging and wheezing at the table like a bunch of Mr Creosotes, a very fresh faced Omar came out for a chat to talk about his approach to the dishes and to give us an insight into his background. Hearing that he started out at the age of 14, doubling up daytime studies with lessons at a cookery school in the evening did provoke pangs of grievance and envy. Don't you just hate these passionate, focused, striving types? I think I was pissing around on Romford market throwing rotten cabbages at other ne'er do wells at that age. But Omar was intensely amiable and approachable and I am sure he is destined for greater things and that his baby face will pop up more often. His tapas future is great and in fact I spied him on Masterchef last week, prompting me to scream at the box "I've met him!" and then think "ahh I haven't written that review yet".

Naturally El Piratas Detapas is one of the many restaurants that is participating in the Viewcard membership scheme. For £29.95 a year, you get access to various deals such such as 50% off and 2-4-1 at over 600 restaurants and bars in London. I've got one and I might just track down that old girlfriend of mine, see if she fancies going out for old times sake before she gets married. After all she needs to save all the money she can at the moment.

Thanks goes to Sauce for the invite and to MiMi for letting me pinch her photos.

meemalee said…
You sound like you were horrible when you were younger :p

I think we agree on most of the food at El Pirata but I really wasn't impressed by the clementine caviar.

Kavey said…
Meems tweeted me the photo of you when younger. With hair. Oh my. What a shocker. :)

I loooove how you start so many of your blog posts with trips down memory lane.