OK, hands up. When cooking at home in my kitchen, I do get a bit grouchy, precious and have been known to swan about like a prima donna declaring that "this is MY kitchen, this is MY domain". I haven't gone as far as wearing a keffiyeh wrapped around my head yet but if I'm not careful, these delusions of grandeur could get the better of me. I think my worst habit is being an absolute stickler for keeping an eye on things. I can't just leave the pots and pans be, gently simmering away. No it's a rhythmic succession of lifting lids, checking, tasting, stirring, checking, chopping, shaking, checking, cha-cha-cha, cha-cha-cha. And please don't talk to me when I am going through this process. I might just be warming some up soup, I don't care, genius is at work here. At dinner parties, best you remain in the living room but if you do need topping up with wine or another cold beer then just tip toe past me, softly and quietly. And god help you if you make any offer of help. The megalomaniacal streak in me will soon have me barking and lashing out with a plastic spatula as I press my ancient and knackered Kenwood food processor close to my heart like a female baboon clutching her newborn. When plating up, I even do that thing of checking each plate, eyeing it up intently and wiping spots clear with the corner of a white tea towel before nodding at my wife. She normally just walks off sighing and punctuates the air with a loud tut. I don't know where this comes from as ordinarily I have the attention span of a gnat. I think it's a general fear of cocking things up, getting it wrong. There's nothing worse than that deflating feeling as you scrape the burnt remnants of a risotto in the bin with bottom lip protruding like the kid who dropped his ice cream. So my mantra when cooking is: Pay attention at all times.

And when cooking fish this mantra is particularly important. A couple of weeks ago, I took receivership of some fine samples from Fish For Thought, a small fish and shellfish supplier based in Cornwall who distribute the bounty of the sea throughout the land via the magic of the internets. Fish For Thought are committed to sourcing their produce through local Cornish fishermen, placing an emphasis on sustainability and have recently gained accreditation from the Marine Stewardship Council. So with this mind, I was very happy to take on board 4 fillets of wild black bream, 6 Cornish scallops, a pack of Cornish cocktail crab claws and a hefty pack of freshly handpicked Cornish white crab meat. Well you would be wouldn't you. Eyeing up the moist crab meat, I immediately thought about making some Maryland Crab Cakes served with a Tarragon Vinegar and Butter Sauce from a Rick Stein recipe that I've used before. It was mainly because I had all of the ingredients to hand. And also because I didn't have to face the time consuming prospect of boiling a crab up and break it into teeny weeny pieces to get access to very little meat. I love crab but it is a pain sometimes to extract the best of the flesh especially when you've been blessed with clumsy, sausage-like fingers. Most of it winds up on the floor whenever I grapple with that damned crustacean. So I set about the task diligently and not before long I had some very pretty looking patties which went in the fridge to chill. Of course, as all good Michelin chefs do, I did a little taste test beforehand to check flavour and seasoning and kept a close eye on the 'sample' cake, giving it just a couple of minutes gentle frying, leaving each side golden crisp. And it tasted great. Savoury, rich, yummy and er crabby. That night's supper was looking good.

Except that night, MasterChef was on.

Now I confess, I've only watched a few episodes from the latest series but I switched on that night to find the final three had been whittled down. Through a series of intensive heats and tasks I should add and not just by John and Gregg's excessive gurning and shouting. A few minutes in, with iPhone in hand, I spied a frenzy of tweets on Twitter with people hashtagging #masterchef and noticed that MasterChef finalists Dhruv, Alex and Tim had been getting involved too. I then had the brainwave of contacting them to see if they would be interested in getting involved with Where's My Pork Chop? "Let's get in there quick before they get chewed up by the media machine!" I screamed, leaping out of the sofa. But then my wife uttered the words "so when are you going to do this dinner then?" What followed next was a frantic juggling of pots and pans and lighting of stove flames along with dipping in and out of the living room to keep track of the programme. Into the mix was thrown a manic dicing of tomatoes, a savage chopping of tarragon and the desperate fingering of a slippery iPhone pad because it got covered in melted butter. Totally abandoning my cooking principles and imaginary keffiyeh, I soon found myself in the middle of my own personal service nightmare and things started to slip. All because of bloody Masterchef. I had been reducing the white wine vinegar for the sauce but let it go too far. When I stuck my head under the extractor hood and my nose over the pan, I nearly keeled over because the vapours were so intense and strong. In the heat and confusion of washing up as I went along, I discovered that I had chucked away the clarified butter I made earlier down the sink, so I set about making some more. Only to find that we hardly had any butter left. So I screamed. "Arrrgh!" And then came the pièce de résistance as I heated the frying pan and popped the crab cakes in and then I glanced down at the iPhone again:

"Hey! Dhruv's heard of Where's My Pork Chop?!" I shouted out.

Suddenly, without any word or warning, I looked up and found myself transported to a countryside scene captured in soft focus. Where I was sat at a sunlit table outside an unidentified ye olde worlde pub with all three MasterChef contestants. These guys, it seemed, were my bestest friends and the air was heady with laughter, back slapping and the consumption of ale in pewter tankards, all of us resplendent in breeches and hats with feathers jutting out at a jaunty angle. A selection of silver platters laden with meat, cheese, bread and fruit were brought to the table by some buxom wench and to my surprise, the saucy maid had also placed down on the bench a clay jar full of bread sticks. To up the hilarity, I decided to take two of the sticks and stuff them up my nose but before they reached my nostrils, some other fug entered my senses. "What was that smell?" I thought. It didn't take long to realise that it was the grim stench of burning crab and I soon came crashing out of that particular daydream to discover that yes, I was burning my Maryland Crab Cakes!

1 - Despite burning the said crab cakes that night, they were still very delicious and I will faithfully type out the recipe at the end of the post.

2 - Even more delicious were the wild black bream fillets we had after, which I brushed with melted butter (the little I had left) and grilled. They tasted fantastic and I can thoroughly recommend Fish For Thought for quality and freshness. The cocktail crab claws and scallops however still languish in the freezer so all suggestions would be gratefully received.

3 - Dhruv, I still intend to get you to cook for me one day (and Alex and Tim)

For Tarragon Vinegar and Butter Sauce

Put crackers into a plastic bag and crush with rolling pin into fine crumbs. Mix crab meat and chopped parsley in a bowl and add just enough cracker crumbs to absorb any moisture from crab (you might not need all of it).

Break the egg into another small bowl and whisk in mayonnaise, mustard, lemon juice, Worcestershire sauce and some seasoning. Fold this mixture into crab meat but try not to break up the lumps of crab too much.

Shape the mixture in eight 7.5cm patties, put them on a plate, cover with cling film and chill for at least 1 hour.

Heat the clarified butter in a large frying pan. Add the crab cakes (4 at a time if your pan is not large enough for all 8) and cook over a medium heat for 2-3 minutes on each side until crisp and richly golden.

For the sauce, bring the vinegar to the boil in a small pan and reduce it to about 2 tablespoons. Add the clarified butter, diced tomato, chopped tarragon and some salt and pepper to taste and gently warm through. Place 2 of the crab cakes onto a warmed plate, spoon some of the sauce over and serve. 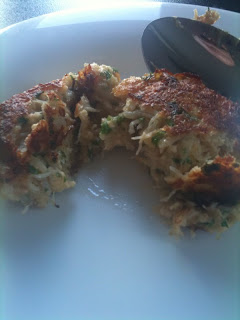 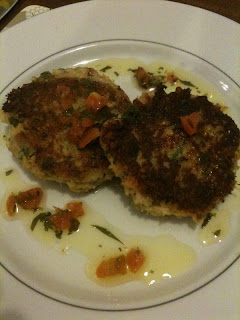 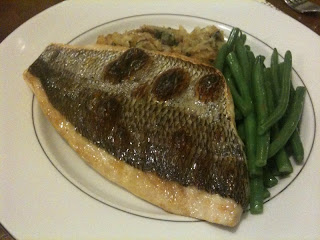 meemalee said…
Even Dhruv was worried about your meal - also, this totally sounds like a WMPC promise :)

Kavey said…
Ha haaaaaaaaa oh my god, haaa, yes I remember witnessing that whole exchange, made me snort my socks off. Well no, they didn't actually come off, otherwise my feet would have got cold, but you know, they quivered a bit.
17 April 2010 at 00:10

LexEat! said…
the bream looks lovely!
a most entertaining post - as usual!
I was just saying the other day that I wish we had an open plan living/kitchen area so that I could watch tv at the same time as cooking - problem solved!
17 April 2010 at 07:39

Anonymous said…
Hilarious post. I'll have to give those crab cakes a go at some stage.

I wouldn't worry about burning them once. My Mum has burnt every fishcake she's ever made. (and considering we had fishcakes at least once a week, that's a lot of fishcakes)
17 April 2010 at 07:42

Food Urchin said…
meemalee - it sounds more than a promise to me, almost looks like a legally binding contract to me.

Kavey - phew, that would have been some snort if it had happened

Lex Eat! - the bream was lovely yes, watching tv and juggling at the stove whilst keeping an eye on twitter just doesn't work

gastrogeek said…
you do crack me up Danny - will give this fishmonger you speak a go. I tried Chelsea fish the other day and it was the freshest stuff I've come across in quite some time, so would be interested to see how this compares. Your poor wife, she sounds very patient and long suffering....;)
25 April 2010 at 17:36