Brian Is Gonna Get It

This morning I woke up full of purpose, thrust and vim with one clear objective on my mind, today was the day that I was finally going to cut the small lawn in our front garden. Personally, I find mowing the grass one of life's more tedious chores especially since I own an ancient Qualcast hover mower that seems to fold blades of grass neatly in half rather than actually cut them. With rising anger and frustration, I often give in to a propensity to start grinding the machine into the turf, teeth gritted as my arms shake violently, sending clumps of soil flying into the ether. The end result is usually akin to my Dad's attempts to cut my hair with a pair of blunt scissors when I was younger, a patchy morass of bald spots with the odd tuft springing up here and there. But the job had to be done and I've been putting it off for too long so I gave it a good crack early this morning. Because my mower is so rubbish it doesn't collect the grass so after the exercise, I had to stoop down and collect the long green sheaves with my bare hands (oh woe is me). As I was doing so, with each sodden handful I kept finding a snail nestled within and we're not talking about babies here, we're talking big, juicy, fat gastropods. I suppose that this shouldn't have come as a surprise given that the Bank Holiday had just past with the usual deluge of rain. Actually I think I was more perplexed that so many survived the onslaught. But as I stood there cradling a slimey sucker in my hand, two thoughts then came suddenly pinging into my brain. The first being that I should really invest in a decent lawnmower that saves me the job of bending over and my poor back. And the second? Well of course I started wondering what it would be like to eat them. The snails that is.

You may or may not know this but the petis gris or escargot that gets served up in French bistros across France and the rest of the world is none other than your regular Helix aspersa. That's the common brown snail to you and me and I've often thought about gathering some to cook at home so this seemed like a marvelous opportunity. I've garnered some information from the internets and the whole process looks to be quite simple. The most important thing to do is to make sure you purge* them and in particular make sure that they haven't ingested any pesticides. If they have taken anything toxic on board they will die within a day after collection which seems to be an easy indicator. If they don't die then they will happily survive on a diet of water which will clean their systems out and after four days will be ready to cook and eat. However you can also carry on feeding them on herbs and cornmeal for up to two weeks to fatten them up. You then put them on a water diet for two days for a final purge. This is what I have read anyway.

At the moment I've got a dozen Brians tucked away in a large Tupperware box (with air holes) in the shed, lounging around on a bed of lettuce and water. I'm not entirely sure what route to go yet, the four day liquid diet or the 2 week super sizing but when I had one last peek before leaving for work, at least 4 of the blighters were engaged in some kind of carnal activity. I think they know the end is near and making the best use of their love darts in an orgiastic frenzy. Well you would wouldn't you if the world was nigh. I shall let you know what I do with them but if in the meantime anyone has any tips or words of wisdom, I shall be very grateful. 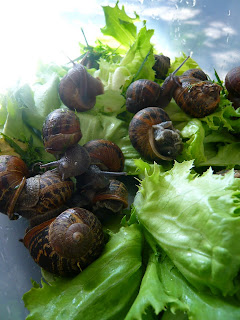 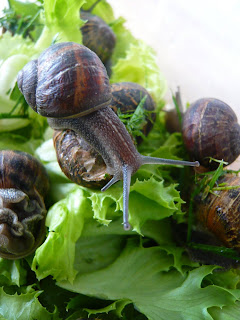 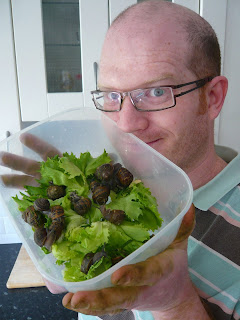 Brian and chums are gonna get it

*purge = make sure they have a good ol' crap

I'm fairly certain Browners reared his own snails if you want tips, though I may have imagined that.
5 May 2010 at 18:47

Jonathan said…
Awesome stuff Mr Food Urchin. I wish I had given this a go meemalee, but FU has beaten me to it! Looking forward to seeing what happens next.
5 May 2010 at 21:13

ScottCanCook said…
Big Sweary Ramsey did this on the f-word a few years ago. Having enough to feed Paris on my allotment I tried it myself and got good results.

I fed my snails fennel and carrots. Carrots are creat because you can see when they are eating your feed.

You can really taste the fennel when you cook them.

I have read that you should at least put the snails in the freezer or fridge for an hour or two before cooking, in much the same way as a crab or lobster, rendering them in a kind of sleep mode prior to being boiled to death. ;)

Niamh said…
Fantastic! I have thought about doing this but I hate snails so very much I wouldn't want them in my house. I like to eat them of course.

Feeling someone should purge me like a snail at the moment!

The Grubworm said…
I wanted to make some crack on the brian's trust, but thought the better of it. If, according to ScottCanCook, they taste of what you feed them, then i would definitely go down the suckling pig route, or maybe truffles and caviar... Delicious. I do love a snail.
6 May 2010 at 12:31

Rachel McCormack said…
You can feed them rosemary like Valencians do to make paella.
6 May 2010 at 12:32

Food Urchin said…
Meemalee - I is going to become a feeder, feed....feeeed.....FEEEEED

Mr Browners - thank you dear food adventurer, I shall keep you posted

ScottCanCook - phew some reassurance from someone who has done this before, may well try the fennel

EssexGourmet - it was you who spurned me on many months ago now, dunno about the freezer treatment though, I mean really?

Niamh - tell me about it, purge purge purge, christ knows what crap is circulating in my system

The Grubworm - snails eating pigs is straight out of a horror movie, I won't entertain the idea, unless...

Hope you're going to make a pair of earrings ou of the shells for Mrs FU :)

Food Urchin said…
The Ample Cook - Shh, the shell earings are going to be a Christmas present, she'll be overjoyed
8 May 2010 at 12:59

Lost in the Larder said…
This is brilliant! Never really thought about doing it myself but you have definitely inspired me to have a go soon. Fantastic post.
10 May 2010 at 10:19

Unknown said…
"make sure they have a good ol' crap"

Helen said…
I cannot wait to hear the outcome of this experiment. I don't blame them for getting frisky. Not much else doing in that tub is there?
20 May 2010 at 12:33

Food Urchin said…
Lost in the Larder - you should do it, very easy! er have yet to cook the things though

Orce - funny the stuff you feed them comes out the same colour the other end....you didn't need to know that.

Helen - I thought about putting a hamster wheel in there but they seem quite happy to eat and shag all day
20 May 2010 at 13:56