Ah the roar of the greasepaint, the smell of the crowds. Despite the gaseous turmoil within, testing my intestinal fortitude to it's limit, this old stage trooper pulled through. You know what they say, once a luvvie, always a luvvie and all my training at RADA* certainly came flooding back. Yes I was very happy with the delivery of my rant for Rude Health at the Real Food Festival a couple of weeks ago. The subject of which was a tirade against inanimate objects in my kitchen that I personally hold responsible for past cooking disasters and misdemeanors, the usual kind of stuff that I bang on about in this blog. So I basically talked about incidents involving fish slices, pasta machines and *sob* my beloved chicken brick. Yes, you've heard it all before but if you would like to listen to me vent my spleen then follow this link and scroll through the list of culinary luminaries, you find me in there, somewhere. Please note, the sound is a little muffled, it's not just the quality of my diction so you may have to turn it up. To 11.

I have to say it was really good fun and hats off to Rude Health for pushing forward this idea of bringing speakers to the fore at festivals to mouth off and rant and rave. A lot of the speeches, though humorous and irreverent, delivered underlying important messages about food and I think that also reflects on Rude Health with their approach to the delicious breakfast cereals they produce. Issues concerning the environment, sustainability and our personal well being as consumers should be addressed but we don't have to be po-faced about it. So kudos to Rude Health for their spunky attitude and thanks for the goodie bag.

As for the festival itself, well the shame is that I didn't really take that much in. Prior to my rant, I spent a good while wandering around like a tit-in-a-trance, trying to focus on my performance. And then afterwards I went straight onto fudge packing duty at the Yum Yum Tree Fudge stall where I agreed to help out owner and fudge maker extraordinaire Lily Turner (her cousin is some miscreant called MiMi). That was good fun too and took me back to my days of working on a curtain stall on Romford Market - "there you go love and look, I've slipped an extra couple of yards of voile in yer bag, you lucky, lucky lady". After a short spell on the stall I made the assessment that, by and large, a lot of people just go to these things for an enormous picnic, wandering around for hours continually stuffing their faces on tidbits rather than actually coming to buy anything. One guy came back to the stall 4 times to gorge himself. 4 times! And didn't buy anything! I almost felt like chasing him and rifling through the greedy git's pockets. After doing my bit for Lily, I did have a quick scoot around again and bought some lovely Belgian beer from the guys at Daas, who incidentally sampled me with plenty of dutch courage before my rant. And I also bought some beer from a very laid back guy from Grain who quite possibly had sampled too much of his own dutch courage throughout the day. And I bought some chervil, sorrel and parsley from a guy who didn't know what he was doing, he was just manning the stall for his mate.

So there you go. I went to the Real Food Show, ranted, packed fudge and walked back out at the end of the day with pots of herbs, boxes of cereal and bottles and bottles of beer. Admittedly, the atmosphere at Earls Court was a bit flat that day but that was probably down to a hangover from Election Night. I would go next year though and take the time to have a closer look around. And maybe next time I'll have a go at the grazers, who do nothing but eat and drink samples, all day long. You know who you are. 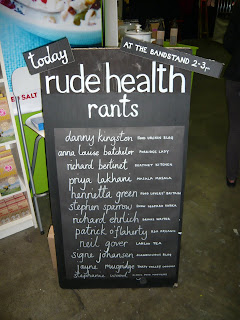 Top of the bill 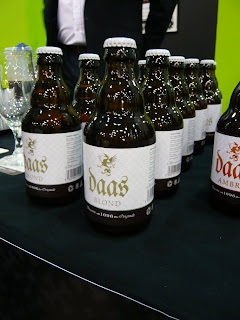 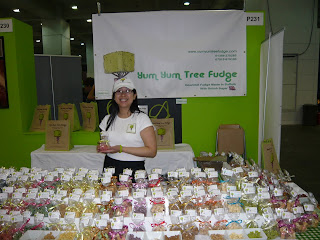 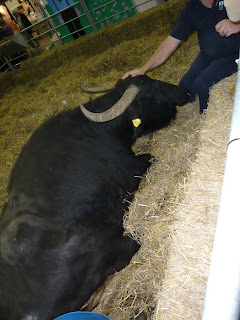 meemalee said…
Thank you for helping (I guess).