Being the prolific sort of blogger that I am, I suppose some of you readers have been wondering where I have been? Well Mum, I have indeed been very busy over the last few weeks but don't worry I will be shedding some light on recent food related shennanigans and revealing all soon. Unless something else comes along and diverts my attention of course. Oh look there's some jaffa cakes in my coat pocket, yahoo!......

In all seriousness, I do have to give you some important updates. Firstly, you may remember a few weeks ago that I ran a t-shirt competition asking people to leave stories of their worst breakfast in order to win an erm t-shirt. And caused a riotous uproar for modelling said t-shirt in my boxers. Opinion was divided on this particular marketing move with some commentators asking that I please cover up for the sake of human decency and with some applauding my bravery to expose my milky thighs on the Internet. Barry from Hartlepool was very complimentary but I decided not to publish his comments. I decided to censor the picture in the end with a kindle of kittens as the boxers were getting in the way of the objective. And also because Barry's requests were getting more and more risque by the day. But how did the competition go and who the hell won? Well I am pleased to announce that the t-shirt went to a chap named @bapSHOUT. Why he wants to shout at baps is any one's business but his worst brekkie of cold kebab was selected at random so hoorah, he got the t-shirt! I have to say though that his tale was one of the more crap comments left by people (sorry Chris!). By contrast, Eatlikeagirl's tale of preparing a breakfast as a wee child was very endearing, Kavey of KaveyEats was very long but entertaining and Maison Cupcake gave us all a stark warning that you should never, ever eat an Asda breakfast. The best story though didn't actually get published on that post which is a real shame. Like a lot of bloggers do, I announced the competition on Facebook and an old college friend left a comment that the worst breakfast she ever had was whilst flying. As she was trying to get through the plastic miniature offerings of bacon and eggs, she noticed that the passenger next to her (unrelated) was urinating into a sick bag and put her right off her beans. Fantastic story and would have been a worthy winner if only she had commented on the actual blog. Next time please Sarah, next time.

In other news, it grieves me to announce that the little project in which I intended to dine on a rout of Brians has gone off the rails. At the risk of suggesting that I have been outwitted by a bunch of snails, I do have to put my hands up and say "I've been outwitted by a bunch of frigging snails!" because the bastards have all escaped. I must admit I am pretty baffled as security measures were pretty tight or at least I thought they were. The 20 snails that I had collected from my garden had been locked up in a large tupperware box wrapped tightly with a couple of layers clingfilm (with airholes punched in). For the first week, whilst going through the purging and then feeding process, they all seemed rather happy, munching their way through a diet of rosemary and rolled oats. Everyday I checked on them, I'd clean the box of purged matter, give them fresh food and water, re-wrap the box and go about my business. The Brians then started to behave in an odd manner. I would pop down to the shed in the morning where their prison was situated and find them all dangling upside down on the clingfilm roof, causing it to sag slightly. Paying no real attention, I would simply go through the usual clean up process and place the box back on the shelf. Then one morning, I came down and found the box empty with clingfilm sunk in the middle and a large hole gaping to one side. With their collective weight, the Brians had stormed the bastile and vanished without a trace. In just a few days, they had accomplished something that took Andy Dufresne years to do!

I have not lost sight of my goal to farm and eat my own snails. I've collected a whole bunch of recipes, mainly Spanish, to experiment with for gawds sake. I will go ahead and do it. In fact I plan to hunt some more down tonight and get them locked up good and proper (I have bought another tupperware box with secure lid - which shall be punctured with holes of course). The main thing that is troubling me now is that snails may possibly have a higher intelligence of some sort, well far far greater than we have ever given them anyhow. What are the ethical implications for hunting and eating such creatures? Is it right or is it wrong? Do snails know the meaning of life? Or am I just being stupid? 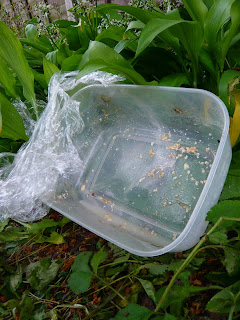 Sally @ My Custard Pie said…
The story of the Brian's breakout did make me laugh. Look forward to the next installment.
3 June 2010 at 13:14

If I'm honest I'm not a fan of snails. In my opinion they're just chewy garlicky bogies.

Rachel McCormack said…
Nooooo!!
Ethics smethics on eating. Pigs are even more intelligent than snails and there is no way I'm giving them up.
Very sad they escaped though.
We'll have to set up a fund to spponsor you to go the Snail Festival in Lleida
3 June 2010 at 15:29

meemalee said…
"Milky thighs" - you have such a beautiful way with words ...

Meemalee - perseverance is one of my many middle names

Dan - Dan, they are quicker than you might ever consider mate and could certainly give YOU a run for your money down Leigh promenade.
6 June 2010 at 20:04

ginandcrumpets said…
The Brians are triumphant! My heart was warmed by that tale, a little bit like the Tamworth Two. I do like a good 'animal escapes abattoir' story and I have a new found respect for the collective intelligence of snails. I don't envy gardeners, who have to face them in combat every day.
7 June 2010 at 08:28

The Grubworm said…
I think it;s time to abandon the idea of a Brian Bastille and instead opt for a more Devil's Island approach. Then maybe rig up a webcam (Big Brian?) so we can all collectively cheer along the next great escape.
7 June 2010 at 14:17

Food Urchin said…
Gin and Crumpets - The Brians won't be so clever next time, I get them my pretty and their little dog Toto too! hahahahaha....ahem

Paunchos said…
Dear o dear. I suggest some sort of infra red CCTV type set up linked up to the blog so we can all keep an eye on them. We could call it "Snailcam" and take it in turns to observe. 1 hour a day each. And if we see them breaking out we send you a message. You can't let them get the better of you. You're better than this.
9 June 2010 at 23:59

Seriously though, I sympathize with your loss. Hope that you get replacements soon!