So after a slightly fraught couple of days, we're in, we made it, we are NomNomNom finalists, Cinderella shall go to the ball. The Food Urchin is proud and happy.

But what the blinking 'ell is NomNomNom and why have you already started with the hysterics I hear you say? Well NNN (as it shall be known for the rest of the post) is a cooking competition for bloggers, photographers and food lovers in general who must team up in pairs and do battle in a sweaty kitchen. The main aim is to prepare a simple, sustainable, and seasonal three course meal in 2 and half hours but we are also required to capture our efforts on camera or video. Their tag line is "It's like Masterchef but for bloggers". Last year's NNN competition looked like great fun which is why I was so eager to get involved with this one. Unfortunately my competitiveness may get the better of me, I'll be sure to clash fish slices and throw salt into my opponents eyes I tell you, give NNN a gladitorial edge you know. Anything for the greater glory, to be pronounced supreme winner. But as for what happens on the day itself (World Cup final incidently) well we shall see. We could get our bums spanked and I might have to eat my hat.

However, it all very nearly didn't happen. Two Essex brothers let me down man. I won't name and shame (Dan and Gary) as they had perfectly reasonable excuses for not being able to jump on board so no hard feelings chaps (you bastards) but thank god for Rachel, the Catalan Queen for stepping in at the last minute. I was away last week in Devon, the deadline for entry was looming and I was still desperately trying to sort out a cooking partner. Lovely part of the world Devon but I wish the yokels would do something some more wireless connections down there. Those country lanes could do with being widened too. Anyway, after some missed calls, telephone table tennis and frantic typing of messages before the reception on my iPhone dipped out, Rachel and I were able to formulate a killer menu. Mostly from her own ideas. But still we got it sorted and nabbed a spot. I look forward to working with you on July 11th Rachel, even though I can barely understand a word you say as you slip effortlessly from Glaswegian to Spanish. If I do step out of line at any point during the competition, do feel free to slap me.

One last thing, if you are unfamilar with the concept of NomNomNom, then go here for an explanation or just have a look at this chap who I spotted chowing down on the vomit comet* a while ago. Look at him go! 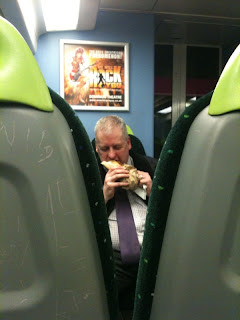 Mer said…
Argh! Why did I look at that picture, right before I was going to go out for lunch?!

Dan said…
Good luck friend, sorry I had to let you down, but my excuse is valid....I'm moving across to the other side of the country that weekend! Next year dude!
BTW - didn't Rachel beat you senseless last time we went out for a drink? good luck with that mate....seriously...good luck.
25 June 2010 at 12:55

Anonymous said…
Another apology from your other Essex letter-downer :-( Best of luck though.

Food Urchin said…
Mer - doesn't that photo fill you will feelings of NomNomNom?

Dan - cheers buddy, you know I am only kidding. Good luck with the move (btw I shall be wearing padding for the comp)

Roastpotato - please don't apologise, it was one of those things. Boy now I feel bad for calling you both bastards......you bastards!

Sarah Maison Cupcake - haven't decided yet, will be sure to wear my witty muscle bound hunk apron though.