Oh to be retired and to spend the rest of your days scratching around a small plot of land, digging a bit here, planting a bit there. Weeding, sitting, pondering, chatting, building, reading, watering, sleeping. Aways doing a bit but essentially taking life easy, just simply going with the ebb and flow of the seasons. Sounds blissful doesn't it? And that's how most of the chaps down my allotment have got it sewn up. No wonder I feel bitter towards them sometimes. Not only do I have to contend with their banter, wry smiles and raised eyebrows, they mock me with their gloriously immaculate plots which are testimony to a decidedly pedestrian approach to allotmenteering. Why can't I have it that way? Why does it always seem like such hard work? Why can't I sit in a shed all day with the radio on and a copy of The Sun for company?*

My visits down to the allotment always seem to be frenetic you see. It starts with spending five minutes or so negotiating the padlock at the gate, sweating and spitting blood because the thing is so damn stiff (I swear one day I am going to break the damn key). I'll then dash down the path, give a quick salutation to my neighbour who is always there rain or shine and whose name I am still unsure of (Dave? Alan? Bill?) and then I'll jump onto our plot and proceed to wrestle with the hosepipe. Tangles get untangled, kinks get straightened out and off I rush to the water tap. Invariably, I'll trip over a lump of wood that's been stuck in the ground to remind me that once upon a time I planted something there, many moons ago. Brushing myself down, I'll plug in and turn on the tap and run back to the hose to give everything as thorough a drenching as possible in the quickest time possible. With crops such as sweetcorn and cabbages, this is no bad thing as the plants are quite hardy and can take a battering from a high pressure jet. Yet when you swing the gun around and aim it at the gooseberry bushes, nothing prepares you for that dull thud in your stomach as your precious goosegogs go blasting off into the air, knowing that they had at least another month to go. After spending a brief moment, crouched on the floor with my head in my hands, I'll just sigh, pick up the gun and carry on regardless because I'm on a tight schedule. And besides, there's always next year. Once that is done, I may have time to scoot around and try to haul up some weeds, usually firmly entrenched due to said liberal watering technique. It's no small wonder to see the old boys watering plants individually from a can I can tell you that. I might manage an extra 20 minutes or so, ripping and tearing up chickweed and nettles (often getting stung in the process) but a glance at the watch usually sends me scuttling back up the path. I'll wave goodbye to Dave/Alan/Bill who has barely moved from the spot and off I'll go to get ready for work or to go to the shops or run off on some other errand. When I get to the top, back to the gate, I'll often turn around and shake my fist at those still left, utterly green that they have the whole day ahead of them to potter around and do nothing.

And that's what it all stems down to really, I am jealous of the ol' buggers. In the past and on the very few occasions that I have written about the allotment, I have alluded that the silver haired brigade down there are a miserable, sarcastic bunch. But after going to our open day last Saturday and having had a good old chat with some of them, I came away feeling slightly guilty of my contempt. Sure some of them are a bunch of Meldrews but by and large, underneath those sun bleached overalls and weather beaten furrowed brows, beats a warm heart and a friendly smile. Over a polystyrene cup of tea, it was quite refreshing to actually speak to some of the faces that in years previous would only offer a curt nod. The big topic was the late frost in mid-May that destroyed so many of the potato crops. Tim in future was going to start growing his spuds in those great big sand bags that builders merchants use in an effort to protect his and Danny had conceded that he hadn't planted his potatoes deep enough. I plumped up and said that with great pride that our tatos had seemed to escape the 'great burn', probably because we had dug deep trenches and mounded the earth fairly high. "Yeah" Danny winked and said, "and to think that we were taking the piss out of you at the time. You do like a spud though don't you, you've sunk enough in your plot to feed an army". In return, I had to concede that this was also true but that was my Dad for you who shares the plot with me. He loves his spuds and does the lion's share of work, so what the hell he deserves them.

We didn't stay down there too long that afternoon as the weather was fierce and having taken the children with us, we wanted to keep the damage limitation under control. To the plots and fruit and vegetables within them of course, not the twins, they are a law unto themselves but I was able to take some random photos which follow. The main point in principle though was that in the four years or so that we've had the plot, this was the first time that I got a real sense of community down at Norfolk Road allotment. I suspect it's been there all along but I've always got my head down in a busy effort to crack on in that one day of the week that I decide to get down there. From now on, I'm going to try the little and often approach like my fellow allotmenteers and chat more often with them too. I might not be retired and modern life is rubbish at times so it might not always be possible but I am going to give it a go. And one day I might just find out what Dave/Alan/Bill's name really is. 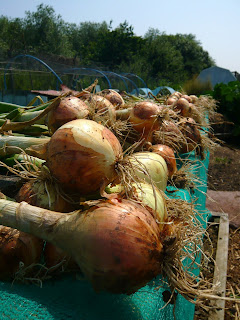 Onions drying in the sun 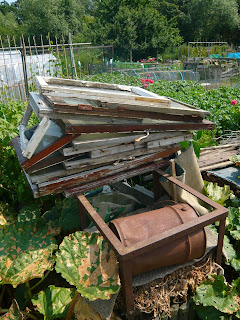 Frames to shield from deadly frost 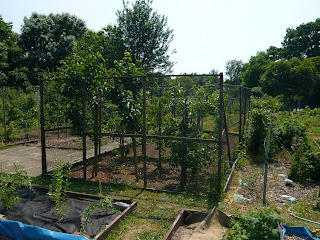 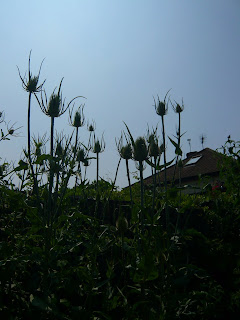 Erm pretty silhouetted plants (prize for what it's called) 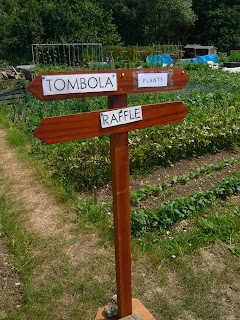 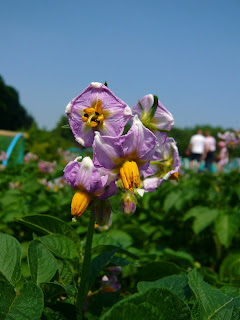 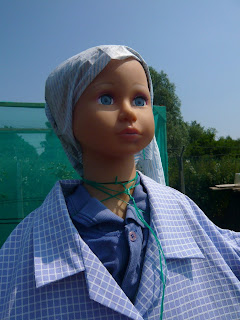 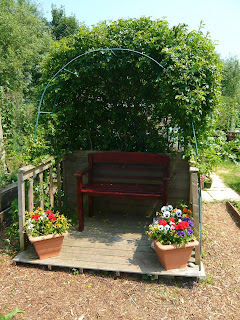 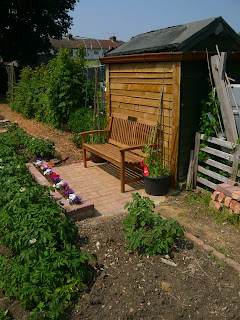 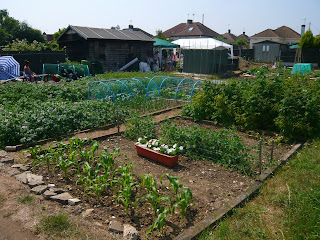 *It would help if I actually had a shed
Labels: Allotment

I've been asking you to let me visit your lottie for OVER A YEAR NOW. Fed up of the yeah yeahs. Want to come NOW. Come on toadydan get with the allotment visitor programme.
29 June 2010 at 22:50

Choclette said…
I loved reading this, it made me laugh and brought back many a memory from our 5 years in the allotment. We did get to know the names of Dave/Allan/Bill eventually but never got to think of them more charitably than old curmudgeons. We now have a much quieter spot in a friends field where Dave/Allan/Bill are nowhere in sight to show us up with their immaculate plots. The pottering about life which I crave too, has not yet arrived - but I keep hoping.
7 July 2010 at 20:44