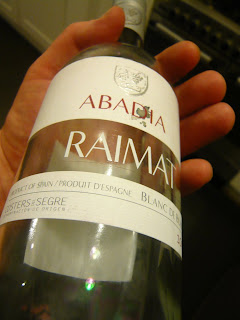 It's all about wine, innit
When it comes to matching food with wine and thinking of a recipe that will marry the pair in perfect harmony, to my mind there are simply two routes you can take. The first is purely sensory. Open that bottle and pour a glass. Look at it. What do you see? Bright straw with a hint of youthful green? Bring the glass to your nose and draw in the aroma, engage those receptors, fill your nasal cavity with odors of tropical fruits. Lift the edge of the glass to your lips and let the cool liquid flood over your tongue, flow freely over your taste buds. Swish around your cheeks, breath in through your mouth, let the air condense those subtleties, to bring out notes of apricot and citrus. Spit or swallow, whatever the case may be and then sit down with pen and paper. Let your experience dictate what is written down, go with your first impulse as you connect the dots. Concentrate on the fundamental character of the wine as you focus your mind, search your memory bank of flavours and zero in on what ingredients will harmonize. Be confident and you will be sure to conjure a marriage made in heaven. Punch the air! Feel good about yourself.

Like I said, this is the first path but alternatively, you could always read the label on the back of the bottle for any kind of clue as to what the hell will go with a particular bottle of wine. And as a rule of thumb, this is usually the path I take. Standing in the supermarket aisle, I'll often bellow a curt "what are we having for dinner tonight?" down the phone and the answer will usually be "Pasta, lamb, stew, it's in the cat.." etc etc and off I shall trot, squinting at the backs of bottles until I find a suitable match. However for Project Awesome, I did want to extend myself for a change and go down the route of sampling the wine first before trying to come up with a recipe to go with it.

Actually, I should lift the lid here and fully reveal exactly what Project Awesome was all about. In short, it was a ludicrously named social media experiment involving various food and wine bloggers which sought to deliver some mystery and intrigue but at the end of the day, the mission was to simply come up with a recipe that would compliment the individual bottle of wine sent to us by an enthusiastic young man and brainchild called Ben who helps manage a small food and drink shop in Morecombe called The Wineyard & Deli. Phew.

I have to say, as projects go, this was great fun to get involved in with and out of all the contributors, I was probably the one who got carried away the most. I am a fantasist at heart so grabbed at the whole concept with both hands, wheeling off tales that I was some kind of hokey spy. By the last post though, I think my wife had enough of taking daft photos of me and certainly wasn't up for smearing tomato sauce on my head despite my pleas. So I smeared it on my hand instead. Attempts to connect an audience with wine and bring it into the mainstream can sometimes be dry, boring and humourless, as anyone who has been to Vinopolis may testify, so hats off to Ben for coming up with the idea.

Now back to the recipe and how I came up with matching an Abadía Blanc de Blancs from Raimat with Pork Tenderloin Stuffed with Apricot, Lemon, Sage and Onion. As I have already sort of indicated, I am no wine buff. But it is worthwhile to sit down and concentrate on a glass of wine once in while rather than throw it down your Gregory with gay abandon. I did this with Mrs FU one afternoon as it's best to do this kind of thing in pairs and I find that when wine tasting there is always a kind of follow the leader aspect to it all.

"Hmm I can smell lemon"

"And it's quite fruity, tastes quite peachy, or apricots even"

"er yeah, yeah I got that too"

I won't reveal who did the leading and who did the following but between us we thought that the wine would suit pork with a simple fruit stuffing. In the past, I've found that tenderloin is a particularly good cut for this purpose due to it's elongated shape. Slide your knife down the centre, three quarters of the way in, open the incision and then make another two cuts along either side, like cutting a T shape almost. And voila, the joint opens up with a nice area over which you can spread a stuffing of your choice before rolling it back together and trussing it with string. As the Abadía was also quite acidic, creating a strong mouth watering sensation after drinking, we figured that the recipe needed a creamy mash to temper this. I say the royal 'We' as this was Mrs FU's suggestion and here I threw my toys out of the pram and decided that the pork should be artistically accompanied by "crushed new potatoes, mixed with crème fraiche and sorrel!" I mean I had to stamp my authority didn't I and glean back some of the credit for the recipe. This was my project! Goddammit!

So we went to the shops, bought the ingredients, came back and later that evening I prepped and slaved over the stove for an hour or so. We then sat down at the table with glasses refilled, at the ready. The result was pretty good and the recipe will follow after all this pontificating but for analysis, the pork with apricot stuffing certainly combined well with the Abadía. A sure fire way to see if it all works is to simply slip a forkful of food into your mouth and then immediately take a glug (I learnt this from The Wine Sleuth). The sweetness of the meat and fruit mirrored up nicely against the characteristics of the wine. I was worried that the sage might throw things out of sync but it's pungent savoury flavour blended nicely into the background. The potato, which after cooking did resemble mash in the end, helped cut through the acid and I was pleased that the sorrel stirred in at the end picked up notes of citrus. But then again this could have been down to the lemon zest which was also in the stuffing. Oh I don't know, all this wine matching malarky, it's still a mystery to me at times.

for the pork and stuffing

salt and pepper to season

for the crushed potatoes

salt and pepper to season

Method
1. Preheat the oven to 190c. Melt half of the butter in a frying pan over a medium heat. When it begins to foam, add the onion and gently fry for 5 minutes or so until it turns soft. Then add the apricots and sage and cook for a further 2 minutes Finally add the lemon zest, frying just for another minute and then take the pan off the heat. Add a twist of pepper and salt for seasoning, stir through and leave to cool down

2. Once the stuffing mix has cooled, take the pork tenderloin, with a sharp knife cut down the middle and either side as per my instructions earlier in the post. Open the joint out, place some cling film over the pork and with a rolling pin gentle flatten the meat. Then spoon the stuffing mixture evenly over the surface area of the cut. Roll back up and secure the joint with string tied at 3-4cm intervals and season lightly all over with some more salt and pepper.

3. Wipe the frying pan clean and then place again on the hob, adding the remaining butter and again melt over a medium heat until it starts to foam. Place the tenderloin in the pan and brown all over. Once that is done, put the pan straight into the oven to cook for a further 25 minutes.

4. Whilst the pork is roasting. Place the potatoes into a saucepan of water, bring to the boil and then gently simmer for 10-15 minutes. You want the potatoes to have a bit of resistance to them and not turn to mush so keep an eye them by prodding with a sharp knife from time to time. Once done, take off the heat, drain the water from saucepan and keep warm.

5. After 25 minutes is up, take the tenderloin out of the oven and out of the pan to rest on a plate or chopping board and cover with foil. Place the pan back on the hob over a high heat and add the chicken stock and wine. Scrape the bottom of the pan with a wooden spoon, to loosen up any porky residue and boil rapidly until reduced by two thirds. Set to one side and keep warm.

6. Time to plate up. Take the warm potatoes and gently crush them with the back of another wooden spoon (always use wooden spoon by the way). Add the crème fraiche and sorrel, stirring all together but taking care not completely mash and season with salt and pepper. Spoon the potato on the plate or use those fancy rings if you've got them. Then uncover the pork and slice into 5cm thick rounds and place them around the crushed potato. Finally drizzle some of your reduced sauce over the meat and around the plate. Accompany with a vegetable of your choice, I added french beans when cooking this. Enjoy with a glass of Abadía Blanc de Blancs or a similar acidic, dry white wine with notes of tropical fruit. 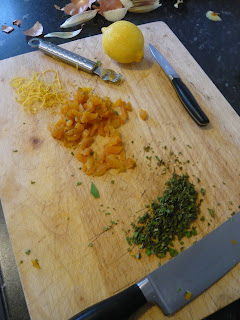 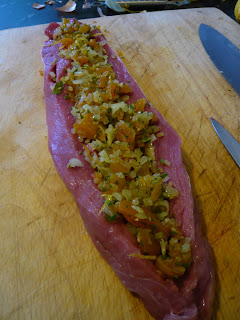 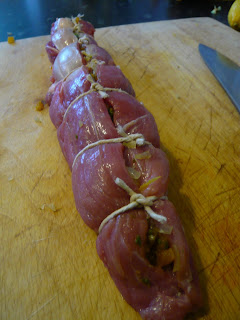 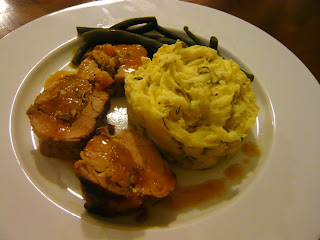 Having made just the one attempt at this, I have mulled things over and rather than brown the tenderloin and then place into the oven, you may want to wrap the trussed up pork in foil and poach in simmering water for 25 minutes. Then cool it down, remove foil and pan fry for 5 minutes, browning it all over before you are ready to eat. Just a thought.

Lost in the Larder said…
That tenderlion looks gorgeous, and with apricot and sage too. I will have to try this. Im quite relieved to find out what Project Awesome was all about, I'm terrible with suspense. Christmas presents under the tree make me want to self combust with intrigue.
18 August 2010 at 14:47

Lisa Cookwitch said…
This sounded like a lot of fun - and that pork looks delicious.

Anomie said…
Just cooked this. It was absolutely gorgeous although I may cut down on the amount of lemon zest used next time.