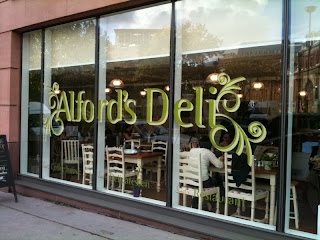 Smithfield, London, 2020 and it's a brave new world. At 1pm sirens sound and office workers spill out onto the street, moving about in different directions, eyes forward with the occasional furtive glace at a watch. Options for lunch are plentiful with food outlets filling every street corner, nook and cranny. However, despite the difference in branding, layout, colour schemes, use of engagement metrics, essentially they are all the same. On invisible conveyor belts, the office workers file one by one into these emporiums and survey the banks of sandwich cartons sitting uniformly in chiller cabinets, sandwiches that have been made off-site in kitchen warehouses miles away from the city. The selection is generic with the occasional nod towards seasonality, not that the seasons are particularly important anymore. Choices are made quickly and the office worker moves up to one of the automatons on duty to pay. Sometimes the robot will be wearing a cap jauntily perched to one side with a huge badge pinned to the side, simply labelled 'Trainee'. As they offer their forearm so that their chip can be scanned, he or she might smile at this marketing ploy dreamt up to appeal to the office worker's sense of nostalgia. But it will be a smile tinged with sadness. The whole transaction is completed in under ten minutes and the office worker is back behind their desk, dutifully eating their Classic Super Club, tapping away at their keyboard.

Meanwhile, on the top floor of a towering glass building in the centre of the city, a group of Alpha males are chewing on cigars, chatting and eagerly surveying a 3D presentation. Interface free, London is replicated in fine architectural detail as the display shows an intricate map of all the city's buildings, streets and byways. Against the buildings and along the roads are blue markers in the shape of a circle. Suddenly the image is flipped on it's side and the shape of the city becomes clearly defined. Even more striking is the morass of dots everywhere, the map is almost completely blue. Apart from one red dot somewhere on the outskirts. The room becomes hushed and the group of sweating suits huddle, lean forward and focus on the red dot. A digital clock appears, hovering over the far right corner of the map and it is counting down from 10,9,8,7,6,5,4,3,2,1. The red dot changes to blue and the Alpha males erupt and start slapping each others backs, braying all the while. Over the melee, corks pop, crystal flutes are charged and champagne is downed in one. Glasses are then smashed on the floor, a phone call is made and the whole group go marching out, laughing all the way. The blue map remains in the room, all is now eerily quiet. But what has happened here? It's obvious isn't it, the last independent sandwich shop in the city has finally gone out of business.

Apologies for the bleak, dystopian opening to this post but I have recently found out that Fantoni's has shut and it's likely to be for good. I've worked in Smithfield for over thirteen years now and Fantoni's sandwich bar on Long Lane just around the corner from my office has been a permanent fixture. Well until last week and having discovered that it's gone, I found myself filled with a mixture of sadness, anger and guilt. Now businesses fail all the time for various reasons but when you know the faces behind the counter, enough to know the names of their daughters, enough to hear and talk about their ups and downs, it's impossible not to make a connection. And as a result I can't help feeling hypocritical about all the times I've visited the Prets, EATs and Marks and Sparks that have sprung up in the area around this small family run sandwich bar. OK my custom alone wouldn't have made any difference but in future I would do well to consider the independent businesses in my area more often. Especially over the big boys that are bashing the lifeblood out of it.

One place that has been bashed about recently is Alford's of Farringdon. I've briefly alluded to their story before here but in a nutshell, this small deli and sandwich shop was facing certain closure at the start of the year due to the Crossrail development that is taking over Smithfield. Luckily, the owner found new premises just down the way on Farringdon Road, next to Vivat Bacchus which was bigger than their old unit so they had scope to seat customers and run a cafe style lunch menu. Its been open for a couple of months now and goes by the name of Alford's Deli so I went down there the other day to grab a bite to eat and see how they were coping with the transition and I am happy to report back that it's pretty much business as unusual. One of the defining factors that tells you that a sandwich shop or cafe is good is when you see a long line of people snaking out of the door and when I arrived at Alford's there it was, the familiar queue. The new unit certainly felt a lot more airy and brighter than the original shop with it's large expanse of glass at the front but I think at the moment they are struggling with filling the actual space they've got. I say this because as you enter, to your left hand side an area has been set aside for a tiny rain forest and other topiary frippery that you can actually purchase. Which is kind of bizarre for a deli and sandwich shop. But saying that, it could well be a lifesaver should I ever find myself queuing up and a light bulb goes off in my head that says 'er isn't it our anniversary today?'

Also I'd say that the deli side of operations is looking slightly lost in the new shop with shelves of conserves and pickles stacked almost discreetly to the side. In the chiller cabinets, just a few choice truckles of cheese and oblong packs of charcuterie were on display so perhaps they are focusing more on catering for the hungry breakfast and lunchtime masses rather than the food shopper who hankers after unusual artisan produce. Or maybe they just sorted out the delicatessen aspect to the new surroundings just yet.

What Alfords hasn't changed is their approach to making great food and offering excellent polite service. Taking a fancy to their lunch specials board, I decided to eat in rather than scarper back to my desk with their regular sandwich of the week which is what I normally go for. After perusing a list that contained Steak and Ale Pie and Seafood Mornay, I plumped for the Mixed Cheese and Red Onion Tart with Butternut Squash Salad and Quince Compote and a Diet Coke, mindful of my continually expanding waistline. After nabbing a table by the window, my order only took 5 minutes to arrive and it was pretty delicious to look at as well as to eat. The caramelised onions in the tart contrasted nicely against the salty cheese in the tart. Vivid roast butternut in the salad was smokey, sweet and tender and the quince compote gave a lovely aromatic bite to each forkful of food. Plainly boiled new potatoes with a pesto drizzle were a pleasant surprise and all for the price of five English pounds. And fifty pence (with Diet Coke it did in fact come to £6.20). Bargain. The biggest brownie point though came when I began to make my way out. Waving goodbye to the cheerful proprietor (I will find out his name one of these days) I spotted a familiar face behind the counter who was busily wiping it down. Alas it wasn't a face from Fantoni's but from Farringdon Fruiterers, a green grocers that has recently been closed down due to the Crossrail development. And this was really heartwarming to see. That despite it all, for all the 'progress' going on in the area, at least there's one person who hasn't lost their livelihood. I know it's all down to personal connections, points of view and I should be equally concerned to hear of job losses at Pret A Manger, if that were ever to happen. But I have to say that when I spotted her, a tacit reminder was served that our small independent shops and businesses need all the support they can get. Especially a place as good as Alford's Deli. I shall be going back more often I can tell you that. 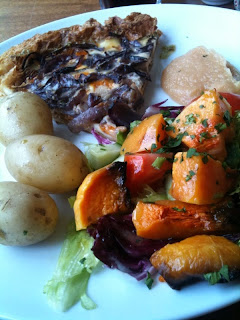 Helen said…
Yes well I think we both know what I think of Alford's. Such a shame about Farringdon Fruiterers though, didn't know that was why they closed down. My 5 a day lifeline was just cruelly cut off one day! Maybe it was punishment in advance for not liking Alford's and their rank salt beef ;)
28 October 2010 at 19:01

Helen - Yes I do and yes I did write this in response to your post mainly because I like their food and because they've had a rough time over the last year or so worrying whether the business would close or not. BUT I respect your opinion and would like you join me back there soon to see if you still feel the same. They are going to be licensed soon, what say you? What if they manage to get some Late Red in?
30 October 2010 at 22:12

Jonathan said…
So, Mr Food Urchin - occasionally I am back in London and when I am my office is opposite Hix on Greenhill Rents, just off Smithfiled Market.

So shall we plan to grab some lunch somewhere... preferably the place that does the best sandwich in the area...
31 October 2010 at 11:22

meemalee said…
I used to love Alfords when I worked in the area - I'm glad it's still around. I remember hearing it was going to shut down and felt very sad.

My favourites were the little pies and pasties you could get for a couple of quid each. And service was always sweet and patient (as sometimes I'd take a while choosing what I wanted!).
2 November 2010 at 09:44

Anonymous said…
Great place, glad they are still going strong. Keith and Manu are partners in the business.
24 May 2012 at 13:24