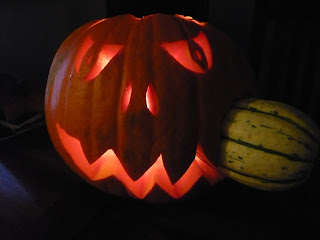 I hate it when someone tries to steal my thunder. I hate it.

So when I came home the other night from the office to find the above carved pumpkin on the table, I hit the roof.

"I was supposed to carve that pumpkin, not you!" I hissed (cos the kids were asleep and I didn't want to wake them).

So in the morning I decided that I would carve the other side of the pumpkin and show her exactly what I could do. And I wouldn't need these gimmicky little saws, plastic scoops or drill bits. I would use a manly knife dammit!

A couple of incisions later*, I decided it wasn't for me. I mean come on, really this is just kids stuff, a complete waste of my time and I've got better things to do but if you fancy having a crack at carving, you'd do well to nip down to your local Waitrose where they are selling pumpkin carving kits for £6.99 (and they may well be reduced in price tomorrow). Now if you'll excuse me I have to make a vampire cape out of dustbin liners. 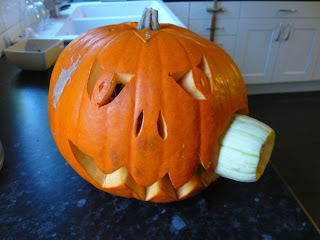 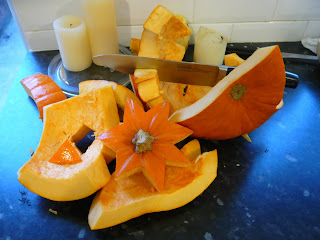 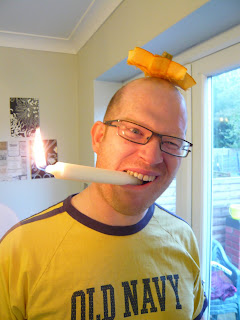 And this is scarier than any pumpkin carving 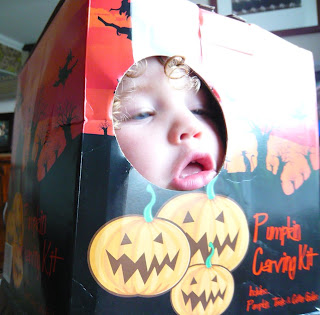 But not as scary as my son
Labels: competition pumpkin Waitrose

meemalee said…
Hey, my kit didn't come with a cute child inside it. I feel cheated.

Unknown said…
genius post!... I simply love carving veg... I have a collection of potatoes carved to look like famous TV celebrities going mouldy on my kitchen shelf...
31 October 2010 at 18:21

Dan said…
At least you managed to "carve" your pumpkin mate. The two we bought, got left...and left....too busy....and left....and are now not looking too clever.
So, feel the warmth that comes with knowing that although your pumpkin carving leaves something to be desired - I didn't even get that far.
1 November 2010 at 09:27

Simon said…
I bought a pumpkin to cook, next thing i know there's a few scraps with my wife saying "that should be enough for you dear". Oh and she forgot to give the pumpkin a nose. Great post, so funny.
3 November 2010 at 20:30

ThermomixBlogger Helene said…
I am so jaded, it takes a lot to move me but your pumpkin-carving adventure and photo of son had me laughing so hard I fell off the chair. Still laughing as I type this! Whuaa haaa HA ha HAAAA !!!
4 November 2010 at 16:10