Getting Jjigae With It 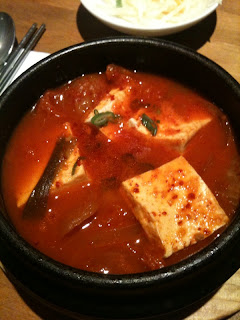 A bloke down the pub once told me that brevity is the soul of wit but alas when it comes to this blog I do suffer from extrapolation, meandering and the general blathering of complete horlicks. See even the end of that opening sentence really doesn't make that much sense. However, in order to post more frequently and not get bogged down in the inner gubbings of mind, I have made the brave step to try and write up short reviews of places I've been to or give concise overviews about my food adventures. Because they are happening with increasing frequency these days and I would like to share. And plus, when I am dribbling in an old people's home at least my offspring and their offspring can turn around and say "blimey, the old git got up to some interesting stuff didn't he!" Because once it's out there, it's out there forever. Isn't it?

So! The other day I met up with May of Slow Food Kitchen, Aaron of The Grubworm and Andre Dang of Andre Dang for a #clerkenwelllunchers session at Tohbang. This was not my first Korean food outing I'll have you know. I visited this smart, clean establishment a few months ago where I broke my dolsot bibimbap cherry. And very good it was too. Raw beef steak with raw egg, various vegetables and spices is served up in a scalding hot stone bowl and whizzed up in front of you by your waitress with some chopsticks. This dish strangely transported me back to childhood when my mum used to cut up my egg and chips for me. Except she never used chopsticks. Anyway, like I said very good.

This time I went for Kimchi Jjigae, a heartwarming chilli hot dish with fermented cabbage and tofu, perfick for a drizzly autumn day. Not quite soup, not quite stew, it certainly brought a rush of blood to my cheeks and a trickle of sweat down my temple. I am a big fan of sauerkraut so the kimchi wasn't a massive surprise although May did say that I should try it unmasked to get it's true pungent flavour. Andre said that if I wanted to explore Korean food further then I should venture down to New Malden, apparently somewhat of a hot spot for this vibrant cuisine. Aaron didn't say much because he was busy stuffing his face. Mind you I didn't say much either as I was concentrating hard on trying to catch slippery chunks of tofu, tongue sticking out from the corner of my mouth. Served up with plain sticky rice, a little amuse bouche of pickled vegetables and at the handsome price of six English pounds, it was quite a bargain for such a filling lunch.

On the subject of filling, Andre kindly gave me some Caithness Butter Shortbread to try. Later on in the afternoon back in the office, I started to tuck into them with a cup of Rosy Lee and they proved to be dangerously moreish. I have to say though, why do some biscuits lull you into false sense of security? One minute you're slicing the top open, plucking a couple out, going about your business. The next minute, you spy the packet beside your monitor almost empty with a scattering a guilty crumbs across your keyboard. I mean seriously, how does that happen?
Labels: Korean review

meemalee said…
LOVE kimchi jjigae, but you wanna go for sundubu jjigae for the real lusciousness
6 October 2010 at 10:57

May said…
I was too busy stuffing my face to take pictures so will not be writing about it. Will point people to your post instead. I did write about Kimchee restaurant where I had the same dish on my blog.
6 October 2010 at 11:15

Nick Baines said…
I have only tried kimchi in a Kogi quesadilla - which I don't really think counts. This looks interesting and I have made a note of it in my little black book, the list is getting alarmingly long now.
6 October 2010 at 11:32

gastrogeek said…
ooh that looks like just the ticket for this spate of chilly weather. What a find! I heart kimchi...
6 October 2010 at 21:38

hampers said…
I have never tried this dish, but after reading this blog...I think I would like to try it. Providing its not overly spicy hot. The combination of tofu with chilli and cabbage sounds yummy.
26 January 2012 at 14:08