The Fire and Knives Mixed Grill

There was something all too reminiscent and unnerving about running to a lecture hall ten minutes late. 'Christ', I thought. 'What was I supposed to have read for this one? Summink about Beatrix Potter and the discourse of post-structural narratives within thematic signifiers in response to a Derridean point of view? Was it? Well I've seen Watership Down, that'll help. Oh balls, why did I have that one last pint last night? I might just go a for a kip at the back'. Wandering into a cavernous Conway Hall, full of hubbub with the sound of chairs scrapping on old wooden floors and general chatter, the unease didn't subside. Surveying eager beards rummaging through rucksacks, smart girls with pens poised and a whacking great big screen up on the stage, I began to panic. Strangely, Kurt Cobain's refrain from 'School' started to reverberate through my brain.

Then I saw the gallery. 'Yes, the gallery! I can hide up there!' But then just before making my escape to the back of the classroom, I spotted tables neatly laid out with cutlery and then suddenly the smells hit me. Somewhere, something was cooking. And it smelt good. The fear evaporated and I breathed a sigh of relief, remembering the whole point of the day. Mrs FU asked if I was alright and I just tipped her a wink and squeezed her hand. Of course I was alright, I was at the Fire and Knives Mixed Grill wasn't I? I mean come on, it's all about food innit, what could be possibly wrong? "Let's go upstairs", I said.

And yes it was indeed all about food. Tim Hayward's promise of a day filled with 'talks, lectures, rants, performances, debates, panels, presentations and party pieces on the endlessly fascinating subject of..food' certainly lived up to expectations. OK it was a bit studious and a touch over sincere in places and as this was the first event of it's kind, proceedings did creak along a bit but that was to be expected. But ultimately it was a great day out, informative and entertaining in equal measures. Having a taste for the theatrical, I loved all the cabaret pieces, namely the very dry Piff the Magic Dragon, Marawa the Amazing with her impervious feet (she frigging walked up a ladder of razor sharp swords) and the supremely sexy Russella who could give Nigella a run for her money. Chris Neill was hilarious, even after nonchalantly admitting that he didn't think he had anything to say about food. Kavey from Kavey Eats was equally funny with her short, sharp rant against supplements on fixed price menus. Chris Heathcote and Florian Siepert turned the nerd factor up to 11 with their brilliant talks on micro-organisms and foodcamps and Siepert in particular has definitely planted a seed amongst some of the audience members, I can tell you that. Dr Morgaine Gaye, a future foodologist with fantastic hair gave us the run down on what we can expect to be eating in, well the future and Stefan Gates showed us, albeit in slightly prolonged detail, that there is nothing, absolutely nothing that he won't put in his mouth. Out of all the talks that had a more literary lilt, for me those led by Matthew Fort and Rachel McCormack worked best. Introduced as 'Ol Blue Eyes', Uncle Fort's appraisal of food in detective novels was warm, witty and fun and Rachel with the help of Spanish actor, Jose Estudillo created a totally interactive experience. By giving the audience chestnuts and melted chocolate to eat as Jose read an extract from The Carpenter's Pencil describing the very same thing, the subject matter of the piece certainly become more resonant.

The star of the day though had to be artisan baker Sam Leach who wooed the crowd with his matter of fact rally against the mechanisation of food, trumpeting quality over quantity and pushing forward ideas to save the economy. We just need to get more people working, baking bread by hand! Simple, direct and all delivered in a charming, ordinary style. Excellent work that man.

I have to say that I was disappointed to discover that James Ramsden wasn't going to be climbing up the stage that day to give us his views on the future of supperclubs, especially as I am about to make a venture into that heady world. Despite talk of rotten tomatoes, I was genuinely interested in what he had to say. And considering that Ms Marmitelover aka Kerstin Rodgers, doyenne and pioneer of the supperclub scene in the UK was there, I suppose I was surprised that she wasn't taking to the forum herself. But then again she was very busy cooking up what looked to be a sumptuous lunch, it was a shame that Mrs FU and I didn't make a booking. Perhaps I'll have to attend their supperclub workshop later in the Spring to hear what they have to say, although it does look a tad pricey. The Mixed Grill on the other hand for twenty English pounds a pop was excellent value for what really was an invigorating, educational (yes, educational!), epicurean day out. I understand more events are in the pipeline, may it go from strength to strength. 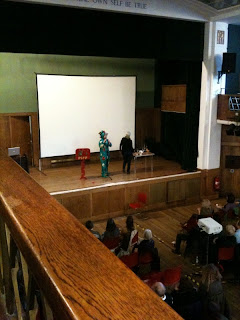 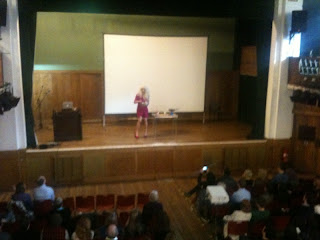 Another poor photo from my iPhone but yes that is a transvestite making pancakes to the thumping soundtrack of Christina Aguilera's 'Ain't No Other Man'
Labels: Mixed Grill review

Florian said…
Thanks for the kind words, if there's anything I can do to help that seed grow into a bacon tree, just let me know!
14 February 2011 at 11:22

Fernandez & Leluu said…
I loved the baker guy! he was great! As you know I also snuck upstairs in my sorry state of-why-did-I-have-that-last-sip-of-wine but really enjoyed most of the talks too
14 February 2011 at 11:26

Kavey said…
I'm not sure whether it was my rant itself that was funny or the ferocious faces I pulled before I started to get the audience into the spirit of it being a rant or perhaps the "Oh Bollox" as I mis-started on page 2 of my notes!

But you are very kind to say so!

meemalee said…
Sounds like it was a brilliant day!

@Pavel - Piff is actually a friend of mine (called John) - he's the magician of the Experimental Food Society and he also works with Heston Blumenthal creating illusions for the Fat Duck.
14 February 2011 at 12:02

Unknown said…
I can think of a couple of things Stephan wouldn't put in his mouth but seeing that there may be children reading I won't say what... (I think he's great but sometimes I want to shout at him in a bad way... is this just me?)

It was a great day though wasn't it? And even though we didn't actually get to meet it was good to know you were tweeting in the same room as me... technology eh?... and to think you were just above me all day long and we've both got legs!...

tori said…
Sounds like it was a great day- thank you for letting those of us who couldn't make it have a vicarious experience... (was down in Cornwall. T'was lovely, but was pretty miffed at myself for missing Mixed Grill).
17 February 2011 at 22:12