I couldn't help but crack a wry smile as I peered out of the kitchen window earlier this week. It was my day off and it was pelting it down with rain. With my forehead resting on the cool glass and clutching a steaming hot cup of coffee towards my chest, I cast my eyes down upon a churned muddy scar running straight through the lawn and I thought to myself 'well that's perfect, just perfect'. And it was. I mean you just don't know how hard it was to turn to my wife and say "well darling, I don't think I am going to get much done in the garden today". You see the big project going on at home at the moment is to get the garden ready for the summer and some of the work involves filling in a whacking great big space where a concrete path used to be with tons of soil. I am not looking forward to it and it's highly likely that I am going to have to get cracking at the weekend. Unless it rains again of course. In which case I shall have to mask my glee and suppress any desire to skip through the kitchen, singing and clicking my heels together like some kind of Tommy Steele from yesteryear. Because that never goes down well.

After nipping out to do some shopping, getting mugged by an old charidee shop lady in the process and some play time with the twins where we built a camp to hide from the Gruffalo, I started to feel restless. As always, there is a billion and one things to do in the house, never mind outside landscape gardening so I decided it would be a good idea to retrieve a fish head and some bones from the freezer with the intention of some making fish soup. I know what you're thinking. 'My God, that man is practical'. I am often in the habit of freezing bones and the reasons are twofold. As you may well have already guessed, I do this firstly with the intention making stock at a later date but secondly to protect my dustbins from a marauding gang of cats that terrorise the neighbourhood. Around my way, leave a chicken carcass to ripen and rot in your bin at your peril because sooner or later, the mangy moggies will mount an attack. I've witnessed an eight strong platoon ram raid our bins with a scaffolding pole before. This not just a matter of wasting food.

Anyway, the fish bones in question came originally from a whole salmon after a bout of curing (or gravadlaxing, if that's a word) over the Christmas period and I was going to try and extract some decent stock out of them. However, after a consultation on Twitter back in January, I was persuaded by a certain Tom Addy, Scottish chef and blogger that the stock would be 'bogging. Instead he suggested that the bones, head and all, could be used to make a very tasty soup. I must admit this was a bit of a revelation for me despite being overwhelmingly obvious and considering that I love soupe de poisson so so much. Doh! Sometimes you need to hit a person over the head with plank before they will wake up and quite often that person is me. But anyway Tom fired off some brief instructions along the lines of 'sauté with loads of onion, carrot, celery, tonnes of garlic in butter', 'add tomatoes, bay, splash brandy and white wine, water/stock simmer for 2 hours and blitz, bones and all' and 'perhaps add cream or more butter for richness and perhaps cayenne and lemon to season = Good Soup'. So I did just that. Given the final result, it was a shame that I waited for a dull miserable day in February to make the soup because it tasted absolutely gorgeous and showcased just what you can do with a few key ingredients on the cheap or for free even, the principle being the salmon bones. If 'waste not, want not' is one of your mottoes (and of course it should be, these guys have got the right idea) then I would definitely recommend that people, you people in other words, give this very simple method a go.

I should add a word of caution though, please do consider the equipment at hand when you get to the blitzing stage. As per Tom instructions you do want grind everything up but be wary, not all regular domestic blenders might not be up to the task. In fact when Mrs FU spotted me ladling the condensed fish mush into our KitchenAid blender she did question as to whether it was wise to put the fish head in. I scoffed in her face and said "of course it'll be ok, the head and bones have been cooking down for two hours now, they're nice and soft". Cue switching of button on, whirling sounds, then a high pitched squeal, crunching noise and abrupt switching of button off, followed by several minutes of deflated silence. When I finally turned to face Mrs FU, she shot me a look which, well how can I sum it up, pretty much went like this:

(or now who's going all Tommy Steele eh?)

So by all means go ahead and make this wonderful soup but perhaps it would be best to chop everything up in a heavyweight food processor first and then strain through a sieve. Yes I think that might be a better idea.

Now if you'll excuse me, I'll be out in the garden. In the pouring rain. 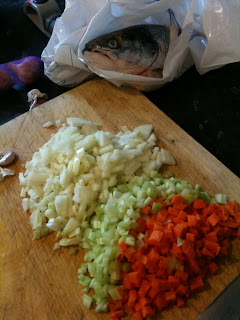 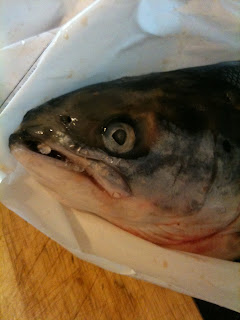 The fish 'ead what done it 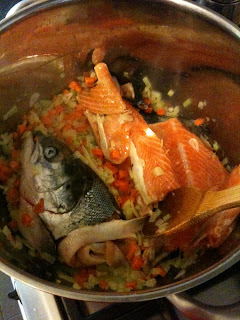 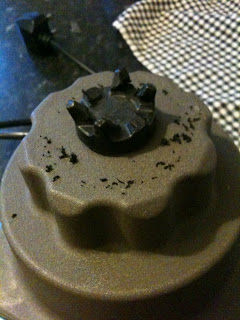 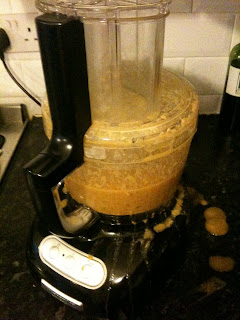 The better tool for the job 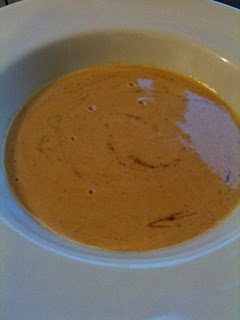 Unknown said…
great post... I have so many 'told you so' moments in the kitchen that The Viking has all but given in and moved on... but as I see it, plastic just aint as good as wot it used to be... never made fish soup... and other than the lengthy sieving process it seems pretty straight forward, so I will be giving this ago, so lanks for the inspiration!
18 February 2011 at 14:55

BeccaRothwell said…
Further proof of just how much you can do with the little that most would throw away!

Sorry to see your blender bit it on the fish head though - think I'd be scared to even use my Magimix knowing that, I don't think I could handle that breaking!

Cheers for the link through to FoodCycle too! For anyone who missed it that was these guys (i.e. the charity I currently work for who tackle food waste and who you should all go and check out now) (sorry)
18 February 2011 at 19:25

Hey, we had Christmas bones for dinner tonight as well!

The goose carcass (frozen of course) had loads of meat left on it - so made a pie filling and served it with Seville & Cracked Black Pepper Jelly.... Nice!
18 February 2011 at 23:16

The Grubworm said…
Good work on the soup - it looks delicious. If it's any consolation, i would've done that to the blender to, assuming as I do that Kitchen Aids are entirely indestructible...
20 February 2011 at 09:27

Going With My Gut said…
As someone who is quickly realising that I have a penchant for what UK fishmongers keep telling me is bait for their boats, I love this post! My eyebrows did jump at the thought of blending a fish head though. But I will investigate how I might liquidise fish bones at home -- the resulting texture looks amazing.

Ailbhe - see these new fangled fancy gadgets just aren't up to the task are they, might get a mouli

Dom - I like to think that we share the same spirit of adventure, we might get told 'I told you so' but sod it, we walk the line dammit!

Becca - it is indeed, shamefully in the past I thrown loads of stuff away thinking I couldn't use it any further ie salmon bones but now I know.

Hen Corner - oooh that sound pretty spesh, got any left?

Goingwithmygut - I watched a Rick Stein programme once where they made fish soup and used this very heavy duty industrial looking machine to grind everything up, that's what you need, not a KitchenAid blender.
21 February 2011 at 21:45

PDH said…
Salmons head are rock solid, every knows that... They fight bears and fly space and all sorts of shit! That last bit might have been a dream actually...
22 February 2011 at 15:02

meemalee said…
Pavel man, isn't 3 in the afternoon a bit early to be chasing badgers?

Mzungu said…
It's a mistake you will not make twice though. End result looks great though.
I used to have to make about 6 litres of the stuff once or twice a week in the restaurant. Shitest job of the week. Hated that sieving. Used to go home smelling of really bad.
27 February 2011 at 11:39