It's wine Jim but not as we know it 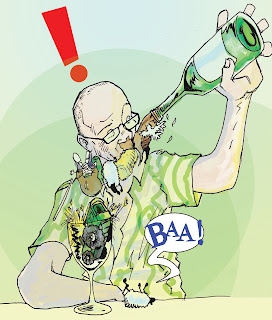 I took one sniff, then another and then squinted with one eye shut at the diminutive pixie-like woman standing in front of me, beaming, willing me on. And then I took another sniff. I then raised the glass up in the air, swirled it around, trying to peer through the cloudy ether and then frowned. "Are you absolutely sure this isn't scrumpy?" I asked. The pixie with a twinkle in her eye gently shook her head and motioned for me to drink. This didn't seem right and taking a glass from someone who proudly pronounces that they are certifiable certainly didn't feel right but everyone else in the room was doing it. So not wanting to be left out of the club, I took one last sniff before finally plucking up the courage to tip the glass towards my mouth, letting the gold liquid flow in and flood over my taste buds. Eschewing the method of pursing your lips and sucking in air, which personally always results in coughing and hacking, I simply swished the strange elixir around before swallowing. Yes swallowing, not spitting. And well, I was pleasantly surprised. Despite smelling of brackish West Country loopy juice, the kind of stuff that has left me lying prone on festival fields in the distant past, this wine, this murky, pungent wine actually tasted very good. This was my welcome to the world of natural wines where appearances (and smells) can be deceiving.

I was invited to a tasting a couple of weeks hosted by Isabelle Legeron, that Crazy French Woman to try out some natural wines and so went along with no preconception of what natural wine is. I mean isn't all wine natural? After all, it all comes from grapes dunnit? Seemingly not so and after a thoroughly pleasant evening of sampling natural wines, both reds and whites from the Languedoc region, I stumbled home an enlightened man. First and foremost, natural wine does exactly what it says on the tin in that it's produced without artifice. The grapes, the vineyards, the harvesting and the process of making wine simply do not get tampered with. There is no use of fertilisers, pesticides, no added yeasts, sugars, additives or heavy machinery. Instead natural wine producers take a holistic approach to their wine making that in some cases borders on lunacy and I don't wish to insult when saying that, I am just making a crap pun on biodynamic farming. So it's all a very hippy dippy, circle of life, the moon is in Uranus kind of way of doing things but that sort of eccentric approach appeals to me. As Isabelle said on the night with natural wine there is a story behind every bottle and knowing that the grapes were picked by a farmer wearing a cow skull at 3 o'clock in the morning seems so much better than picturing a cavernous warehouse with hundreds of steel vats. Furthermore some of the wines we tasted were, like I said, very good. By and large they all had an earthy, farmyard quality that on first taste might be perceived as quite rough but once you got your teeth into them, the subtleties came through. My favourite of the night was L'Inattendu Minervois Blanc from Clos du Gravillas, a dry white that was quite intense at first before fading with mineral notes, really good. Coupled with some fine charcuterie and cheese (and some very dirty, cheesy feet from some quarters) it was all in all, a very educational night.

If there was one snag behind the promotion of natural wines, I would have to say that it would be the cost as the retail price generally hovers around £20. Obviously this reflects the time, care and effort that goes into producing natural wine and as Isabelle was also keen to point out, why not splash out on a bottle of something different and special for the dinner table rather than going for cheap deals. He types, clutching three bottles for a tenner under his arm. But seriously, natural wines are really worth investigating and if this has tickled your fancy then you would do well to go to The Natural Wine Fair at Borough Market on Sunday (open to trade only Monday and Tuesday) where Isabelle and five other importers are showcasing 500 different natural wines. Admission is £18, you get a catalogue and tasting glass to take away. And I think you're allowed to swallow.

PS The featured cartoon was drawn by a talented bearded oaf who is going to marry my sister, please check out his blog too.
Labels: natural wine wine

john bojanowski said…
Dear Jim,
Thanks for the nice comments on L'Inattendu ! I don't think I saw you at the Natural Wine Fair this week, so I am intrigued how and when Isabelle got you to taste our white wine !??! Now am back to the vines; the growth never stops. Yours,
John Bojanowski Clos du Gravillas
19 May 2011 at 15:17