Foraging with The Fat Hen and unearthed

It’s 2011 BC and a rag tag group of Celts are standing around in a circle at some remote coastal location in Kernow, all clutching straws. Adorned with animal skins and feathers and smothered in wode, the mood seems pensive and tense. Eyes flick back and forth towards a strange bush situated near the edge of a cliff. A grunt is issued from one older looking man, quite possibly some kind of shaman given the fact that a badger skull is jauntily perched on his head and everyone simultaneously opens their hands. There is a collective sigh and general murmur of approval and relief amongst everyone. Except for one rather small chap whose face drops into a frame of intense sadness and anxiety as he stares down as the short straw in his palm. The shaman notices this and motions towards the bush with a bark and a thrust of his gnarled wooden stick. Slowly but surely the small chap edges towards the bush and somewhat shakily stretches his hand towards it. Again, all becomes quiet. With a swift movement he grabs a clump of leaves and stuffs them into his mouth, chews down fiercely and then swallows. Time seems to stand still. Only the gentle breaking of waves on the cliff face below interrupts the silence. The small guy blinks and then lifts his hand, motioning to the group with a victorious thumbs up before suddenly clutching his stomach. He then screams, staggers back and falls off the cliff. Everyone's shoulders collectively sag before badger man motions everyone to move on in single file. As they trudge off, a frowning misfit right at the back begins to whisper to his consort in front.

“ You know the same thing happened to Barry last week don't you, I think the old man is starting to lose the plot. How are you dealing with the mushrooms he made you eat?

Now let's fast forward to a rugged outcrop near Penzance in modern day Cornwall and this is precisely the scenario that enters my head. I'm standing there in the pouring rain, clutching a single green leaf, poised to place it in my mouth. I'm not worried or anything. I have total faith in our guide, Caroline Davey of The Fat Hen. But then suddenly, I am dumbstruck by this strange sense of awe, this bizarre feeling of wonderment, this notion that when it comes to foraging wild food and garnering all that knowledge down throughout the ages, that simply hundreds and hundreds of thousands of people must have died along the way. If it wasn't for all those poor souls, those hunter gatherers who unintentionally carked it, well we wouldn't be here would we. None of us would. 'This is amazing', I think to myself and I am desperate to share this anthropological epiphany with Caroline and the rest of the group. But having turned up to the unearthed Foraging Masterclass in shorts, trainers and with no waterproofs whatsoever, I felt it would be best that I keep this little revelation to myself. You know, to save any further embarrassment.

Shaky evolutionary theories aside, I have to say that I had a very enjoyable albeit soggy time down in the south west last Friday with unearthed and The Fat Hen. Arriving early in Penzance via the overnight sleeper from Paddington (or 'sleepless' as it is also known as according to Ismay, she's right) our merry band were transported to Fat Hen headquarters for a breakfast of fresh bread, japanese knotweed jam and sloe gin before heading out into the wilderness. The main aim of morning as you might expect from a foraging masterclass was to learn all about wild food. A subject I thought that I knew a little bit about but after just a few minutes in the company of Caroline - botanist, ecologist and professional forager - it seems that I've been kidding myself. With an easy, warm manner she dispensed lots of information, expertly pointing out each plant to our group, it's latin name, properties and culinary uses. What astonished me most was the seeming abundance and availability of edible plants that can be found on such a short walk by the sea but saying that, Caroline was eager to encourage of sense of respect and responsibility. Take only the very common plants such as nettles, alexanders and sorrel, use scissors to cut leaves and leave more than half the plant to grow back were just some of the mottoes of the day. The best part though of course was plucking leaves to smell and taste. Towards to the end of the walk we wandered into a Tolkien inspired woodland and picked some wood sorrel which had a much subtler citrus note than the common variety, it's certainly an ingredient I'd like to discover closer to where I live.

Accompanying us on the walk was Simon Day, founder of unearthed and I sidled up to him at one point to ask "so what are you doing here anyway?" because at first I couldn't make the connection between an importer of continental artisan food stuffs and the really wild stuff. Simon explained that on his travels around Europe looking for different producers, he noticed that a lot of areas thrive on a wild food culture and foster a symbiotic connection between making food and foraging food. Plates of charcuterie, slabs of pate, bowls of olives served up on tables in quiet, dusty villages will often have been made or presented with foraged ingredients. So Simon thought it would be fun to see what The Fat Hen could come up with using some of the products in their range. This did beg the question as to why weren't we using artisanal foods from Cornwall then, a nice local cheese for instance but Simon just smiled wryly and said that he was looking into sourcing some British products for unearthed. I hope he does. We had a really good chat and a giggle on the walk, although I could have started off better. I actually kicked off with "so how long have you been with Unearthed?" "Er, I started the company Danny." "Ah......." Sometimes ignorance isn't bliss.

Having then spent the morning wandering around, gaily skipping around in the rain, snipping leaves and flowers to put in my basket, it was soon time to get back to Fat Hen farmhouse kitchen for the important part, lunch. For this part and as part of her Gourmet Wild Food Weekends, Caroline employs the considerable talents of local chef and tutor, Mark Devonshire. I met Mark many years ago at Rick Steins Cookery School and although I don't think he remembered me, he still remains the funny, cocksure chef with a penchant for olive oil and cling film from way back when. Caroline and Mark had evidently put a great deal of time and thought into combining the foraged ingredients with the range from unearthed and sitting around a table listening to Mark explain the menu whilst nibbling on canapes and drinking wine was very pleasant indeed. Well it would be wouldn't it.

Canapes came in the form of Pork rillets with pickled rock samphire on sourdough toasts, Chorizo, cornish scallops and wood sorrel and Saucisson Sec with crispy laver seaweed were all delicious. The saucisson and seaweed was amazing actually. Soft, garlicky slivers of pork salami wrapped around crunchy laver proved to be a devious incitement to filing my stomach up but I was able to walk some off before heading into the goat barn for the main event. To start we had Nettle rotolo with barrel aged feta cheese and wilted wild greens, accompanied with a fantastically punchy wild salsa verde. For main we had Monkfish wrapped in wild herbs (wild fennel, wild chervil) and Serrano ham, served with a marsh samphire rosti and a rock samphire fritter. And dessert came in the form of Panettone and elderflower bread and butter pudding with eldeflower ice cream and elderflower fritter.

The sign of a good meal is usually silence but as we all got stuck in, the air was often punctuated with "ooh that's different" and "now what does that remind me of?" which is testimony to the fact that whilst our palates and brains were recognising the flavours, the use of wild ingredients meant everything was just ever so slightly off kilter. And I say that in a good way. It was like discovering something new but which is not new. If you get my drift. But most importantly, there was a nice balance throughout. The aforementioned punchy salsa verde was offset by the creamy feta in the rotolo, the herbs complimented the monkfish and serrano ham and the elderflower ice cream? Well that's a kingly addition to any kind of pudding in my opinion, it seems to be made for sweets. It was, in short, an excellent lunch.

Brimming and tired, I have to admit I was happy to get back to the hotel for a late afternoon snooze but happier still for meeting up with Caroline and Mark at The Fat Hen and Simon from unearthed and trying their gorgeous food. But the sweat drenched nightmares later that evening? Of ghostly ancient ancestors, pawing at me with wide eyes and foaming mouths? Warning me - "Stay away Danny! Stay away from the cow parsley!"

Well I wasn't too happy about that.

Thanks to Unearthed and Wild Card for the invite down to Cornwall. 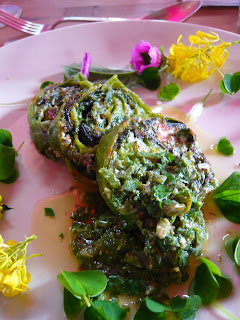 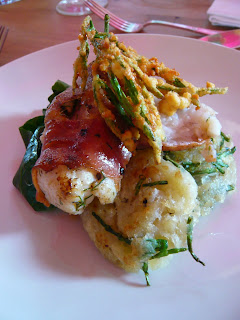 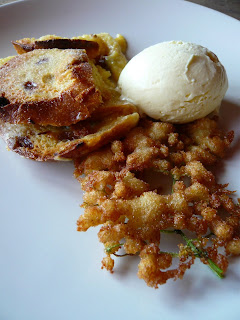 This looks fab, though the sleeper would have killed me.