In these scary, portentous and angry times, it doesn't feel right to be flippant but as I am absolutely fucked off with everything and haven't posted in a while, in an effort to lighten the mood and to get this blog fired up again, I thought I would give you all an update on my marrow rum. This rum or grog or batshit bizarre bongo juice has been gurgling away in my kitchen for the last few weeks now and just the other day, I took the brave steps to sample some. These were the unexpected results.

Like I said, the marrow has been sitting quite benignly in the corner of our kitchen for some time now. I had sealed the bugger up pretty well, using sellotape at first and then moving onto clingfilm. If it hadn't been for the attention of the odd fruit fly, I may well have forgotten about it but I do distinctly remember walking into the room thinking 'where the hell are all these fruit flies coming from?' and my eyes zeroed in on said corner. 'Aha, lets see how the ol' marrow rum is getting on' I thought. It was 10 in the morning. 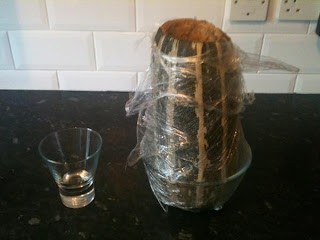 Brushing the fruit flies away, I peeled off the clingfilm, popped the top of the marrow off and peered down into the abyss. 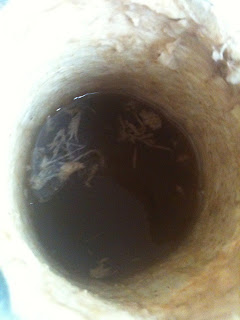 If I were to be really honest, looking at it, well it reminded me of a terrible case of bum gravy I once encountered in Zimbabwe a long, long time ago. But the fierce scent of alcohol was searing the hairs of my nostrils, clean off in fact, so I felt encouraged enough to pour some off into a glass using a funnel and an old pair of my wife's tights (at least I think they were old). 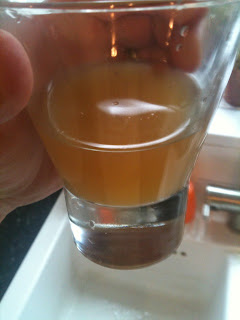 It still looked like bum gravy but the more vegetal, floral notes of the hooch started to emanate from the glass and I began to grin at this point. Sure it looks pretty grim, I thought but as experiments in home brewing go, this could be a success! Buoyed by a resurging confidence and a quick fire business plan to enter the drinks market with my new range of 'vegetable-based' rums, I toasted to a premature success. 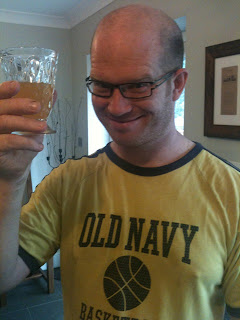 I brought it to my lips. And my nipples exploded. 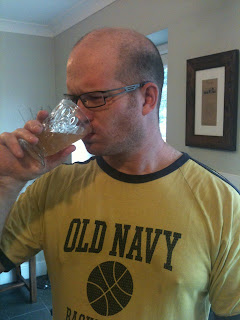 And then I turned into Edgar from Men In Black. 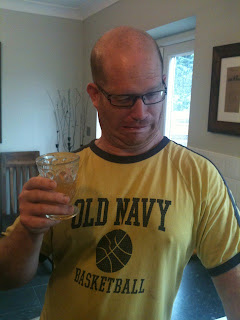 Can I say anything further on the tasting? Well no. I am really sorry but I really can't at present. Well apart from "er, it needs tweaking". I can say this though, I've tried some more tonight and given the transformation, I feel fully prepared to hit the streets and scare the bejesus out of the little fucking shits who are rampaging throughout our cities. 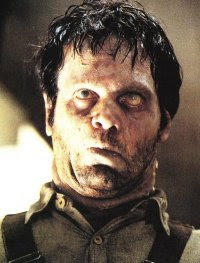 Tara Cardwell said…
That sounds like the best plan to achieve the peace anyone has come up with! Quick, lets get it trending on twitter - if we all make the rum we can use the empty marrows as anti-thieving-little-shit-missles.....
Thanks for cheering up a very grim evening with a very huge giggle!
9 August 2011 at 23:52

janetwro said…
Now, see, I'm not that impressed with this #OperationCupofTea popping up on social media because that's something most of the Brits would be doing today anyway. #OperationMarrowRum would show the world what Brits are made of...
10 August 2011 at 09:57

lucylastic said…
I was tempted to try this when I read your first post - having a marrow or two to spare myself, courtesy of a neighbour with an allotment - but I'm not so sure - am thinking I may go straight for slow gin instead! Brave of you though.......Lucy
12 August 2011 at 15:12

Anonymous said…
This really made me laugh, I was relieved of my phone by said little fuckers and am just now getting back into my food blogs and other interests. It is very lovely to read...
16 August 2011 at 21:41

Unknown said…
Haha hilarious, amazed I managed to read about rum while seriously hungover, but that post did make laugh out loud!
21 August 2011 at 12:55