Get Yer 'Ands Orf My Cobnuts! 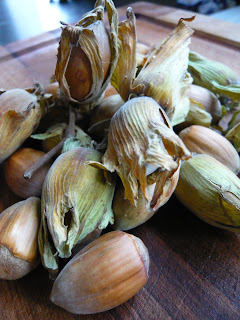 There is an elderly owner of a fruit and veg stall, down a market very close to where I work, who is a right miserable so and so. I don't why but every encounter I have with him seems to be marked by some grievance on his side. I've been reprimanded for taking my time when eyeing up his apples and pears. My enthusiastic appreciation of his blood oranges has been met with derision. And he once gave me a right old rollocking for, as in his own words, for "fingering his figs". One episode in particular lingers long in my mind. I had made quite a hefty purchase of various bits and bobs from his stall and after handing my cash over, I went to grab what I thought was my blue carrier bag, when he snapped, "oh no sunshine, what do you think you're doing?". "I'm taking my stuff", I said. "That's not your stuff, this bag is for someone picking up their stuff later, your stuff is in that bag", he barked, pointing with one stubby finger to another blue carrier bag. "How do you know that's not my stuff?", I countered. "Because your stuff is different to her stuff". "Her stuff?". "Yes, her stuff". "Well, what stuff did she get?". Unfortunately, the conversation stopped quite abruptly at that point as Mr Grumpy simply shoved a blue carrier bag into my chest before turning and walking off, muttering under his breath. I think he might have even called me a stupid bar steward. Which was a shame because I was enjoying myself. Despite this somewhat abusive relationship, I always return because his responses appeal to my absurdist world view and as time passes, the opportunity for mischievous and surreal exchanges grow and grow. After this latest conversation however, I think he is beginning to let on that I am a bit of a wind up merchant.

"These nuts, are they cobnuts?

"They come from Kentish Cobs"

"Ah and where do they come from?"

"They come from Kent"

"What's the difference between a green cobnut and a golden cobnut?"

"And how fresh are your nuts today?"

"Do you want some cobnuts or what?"

"Hmm, nah, maybe not. Do you have any hazelnuts though?"

The lady standing behind me got served after that.
Labels: cobnuts stories

Unknown said…
I look forward to hearing further exchanges between the two of you. Funnily enough I was given a bag of cobnuts by a friend, and I don't really know what to do with them apart from just eat them as they are, which is no hardship really. Any suggestions though?
25 September 2011 at 15:23

Hollow Legs said…
!!!!! I think people have a 'thing' for figs. Helen and I were chased from a market stall in Puglia for molesting a man's figs.

Food Urchin said…
The Little Dinner Lady - I had a dessert recently which contained shortcake with a cobnut and spiced crumb, lovely it was

Dom - don't stick up for the miserable bastard!