Life and Death in Cardiff 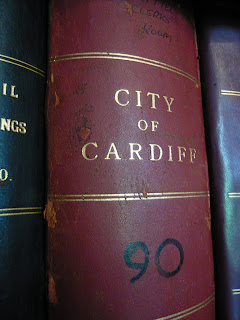 I don't get to spend as much quality time with my little skin and blister as I used to. We see each other a lot but our adult lives are busy. Days and weekends fill up fast and quick and with each passing year, time seemingly evaporates into thin air. Sometimes, I find it hard to believe we're the ages we are. Sometimes, a sunny afternoon spent fishing for sticklebacks in the river Rom with wellies and empty plastic ice cream tubs feels like it only happened yesterday. However, despite this onward march, we remain close and whenever we get a chance to pair off, we always have a laugh. You know I don't think we have ever really fallen out. I am proud of that. So when the invite came through to attend a banquet at Cardiff Castle, celebrating the best of Welsh food and the end of a very impressive journey for this lucky couple, I immediately thought of Tori (Mrs FU wouldn't be able to come along. I mean who would look after the kids?)

We rolled up at Paddington, bright and breezy on a Sunday morning and grabbed a coffee. Tori also wanted to grab a newspaper for the journey but I told her there would be plenty of papers for us to read on the train. We were travelling first class after all, 'expenses paid' exclaimed the boastful brother with a wink. Of course, there were no free papers to be seen anywhere, just free watery coffee so initially I had to face a surly sis as we pulled out the station and past the Westway flyover but we soon got chatting, making use of her iPhone to play Scrabble. "Ed-Ged??? What kind of word is Ed-Ged?". "It's 'edged', you prat". I was never that good at Scrabble. Along the journey we talked about lots of things. Funny stories, past and present, plans and dreams, collectively spitting on the floor at the mention of Tori's ex, who won't be mentioned any more. The unpronounceable Dolgellau came up in conversation, a drunken weekend with both sets of our friends in Snowdonia where I fell down a hill on a midnight walk and got stuck in a bush. Tori came to my rescue that night and I was about to agree to the suggestion that she was always the more sensible of the two but then, ten minutes later, she made rather disparaging comment about Jonathan Davies. On a train full of Welsh rugby supporters. Perhaps we are more alike than we realise.

We arrived in Cardiff with time to kill, completely missing the Millennium Stadium somehow, making a beeline instead for a pub just outside the castle. The sun was past the yard arm so a pint of Brain's Dark seemed to be in order. The barman was very convivial, asking what I was up to in Cardiff that day. "Sounds great. So you're a food writer eh? Who do you write for then?" God, the amount of times I get caught out with that one so I used my usual stock response, "oh it's a blog called *mumble mumble* ooh look a squirrel!" before turning and hastily making my way to a corner where Tori was sitting, taking a slurp of gorgeous nutty, malty beer on the way. Staring at her orange juice, I could tell straight away that Tori was regretting the decision to leave her car at mine and so we quickly mulled over some options. Leave the car and use the universal taxi service of Mum to get her to work the next day sounded best so she picked up her phone whilst I idly stared out the window, taking another sip. It was the tone of her voice that made my head swivel back. Ashen, Tori's face crumpled as she lifted her hand to her mouth and my stomach lurched. "What's happened?" I asked and with a whisper she told me that Andy, one of our cousins, had died that morning. Andy hadn't been well for a while but having visited him in hospital a couple of weeks previously, he seemed to be growing stronger, winning the battle. But he didn't. He was 31.

Leaving our drinks behind, Tori and I just walked out onto the street and hugged in front of the castle, crying, not knowing what to do. I phoned Mum again, trying to work out how quickly we could get back, asking what could we do and calmly she said "just stay where you are Dan, there's no point racing home to sorrow, just raise a glass for him and try to enjoy your day together". And that's what we did. As surreal as the whole afternoon felt, we stayed and enjoyed ourselves. Occasionally the mask slipped, which had to be covered up by a scramble to the toilet, I hate to think what fellow patrons made of my swallowed sobs coming from the cubicle. But we did it. It's strange but my memory of the day seems to be more focused on the people that we sat with. The food was amazing with a sublime main of tender Ifan Valley saddle of lamb but to be honest, the company of strangers stands out more. The girls from Wales The True Taste were great fun and so obviously passionate about the produce from their country but the main star of the day came in the form of Susan Fiander-Woodhouse, a woman who matures cheddar cheese in an old mine in Blaenafon. As you might expect from someone who uses this unusual method, Susan was oh so slightly hat stand but also very funny and kept our spirits high at the dinner table. With a twinkle in her eye, she weaved a fair few tales of hilarity involving food, the EU regulating her 'chunks' of cheese and her serious twitter reporting of growing vegetables - "people have the right to know how my tomatoes are doing". If she turned around and said she grew leeks in her knickers I wouldn't have been surprised but I am very grateful to have met Susan. She made me grin from ear to ear, which counted a lot for that day.

Thanks for the invite Visit Wales, I think I know who your next poster girl should be. 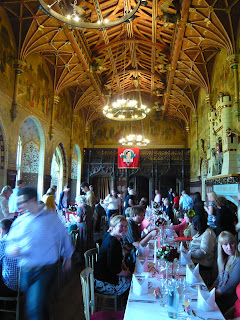 The Piers and Emma Farewell Banquet 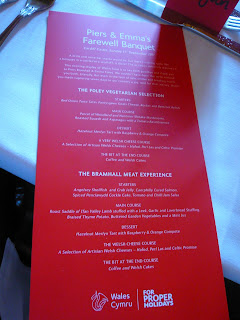 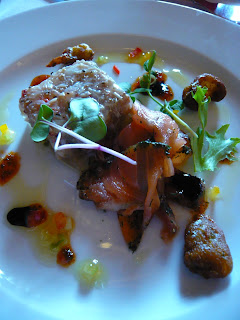 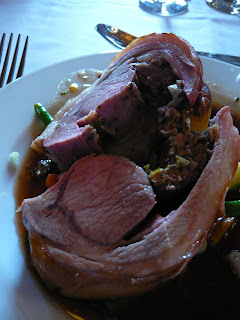 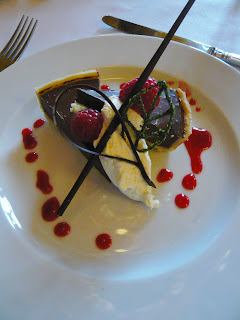 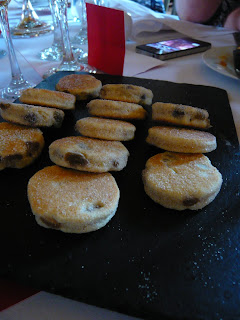 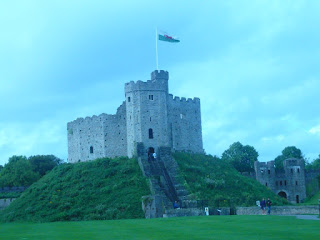 Tara Cardwell said…
Sorry to hear your sad news. I know what you mean about the company of strangers - they can be so helpful in times like those.

meemalee said…
Lovely to see you today and chat.

Seren said…
Always read but seldom comment - however, just wanted to send my sympathies to you and all the family.

And there was me thinking that I was the only one who used that phrase. That's what we say my best friend is, though rather more than slightly...

I'm glad you had a good day, all things considered. Wise words from Mummy FU there.