Delirium and Christmas Crackers on the Orient Express

Even after splashing my face with cold water and resting my forehead on the lip of a cool porcelain sink, the heat is fairly unbearable. The luxury of my surroundings doesn't quite allude me. As toilets on trains ordinarily go, this one with teak panelling and fluffy towels has to be nicest toilet that I have ever been in. And I've suffered some terrible toilets on trains in my time. But still, the stifling air is threatening to knock the wind out of my sails. 'Don't pass out', I whisper in the mirror, silently cursing my genetic make up. Gingers, even those on the wane, do not fare well in this kind of weather. I douse my face one more time and glimpse back into the Art Deco frame. Peter Ustinov peers over my shoulder, wearing a gold paper crown, sipping a glass of champagne and in his cod-Belgian accent cheers, "Joyeux Noël mon ami! Are you 'aving a good time?" I slump back onto the throne and think that this has got all too much. 'It's October tomorrow for God's sake, why is it so hot? And why am I wearing this stupid hat?' And then I remember, I am having Christmas dinner on the Orient Express.

OK, it wasn't quite THE Orient Express but as invitations go, this one was still pretty special, to preview Christmas lunch on the British Pullman which leaves Victoria Station at 12:25 prompt and goes on various excursions throughout the year. As you walk up to platform 2, you certainly get a sense of occasion as people mill about in their finery with a jazz band tooting in the background. Actors (at least I hope they're actors) swirl around in period clothes, dancing on the concourse and chat to fellow passengers which all adds to the buzz and bonhomie. When the train arrives, there is a slight pause of hushed reverence before cameras click and the scrum to get on board commences. An octogenarian tramples over my foot in the rush, such is her excitement. Which piques me slightly but who am I to complain, it's quite obvious from her face that she has been looking forward to this trip. It would have been nice if she had waited for her husband though and hadn't left him behind on the platform.

Our carriage is named Gwen, orginally a consort to the Brighton Belle which used to ferry dear, dear Larry from coast to city all those years ago and our private little coop inside is festooned with decorations. The only thing that is at odds with the whole proceedings is the aforementioned temperature. The country is in the grip of an Autumn heatwave and to be honest the last thing on my mind is Jingle Bells. But as champagne is poured and the train lurches forward on it's journey into the Surrey countryside, I settle back into my very comfortable seat and whittle my eyes across the menu:

Tian of Whitby Crab and Atlantic Prawns, accompanied by a Gin and Tonic Gravadlax

Chocolate Delice and Spiced Clementine Jelly with a Raspberry and Cranberry Coulis.

So yes, despite the damp patch forming on the back of my shirt, I'd say that there are definitely worse ways to spend a Friday afternoon. In fact, everything was pretty damned perfect as the food and service was equisite. The subtlety of the juniper in the salmon was a great match for the rich creaminess of the crab. The delicate, salty cheese scones were lovely to dip into the sweet and spicy soup. The beef fillet, cooked medium rare was beautifully tender. The cheese was dispensed in generous fat wedges and dessert was both clean and refreshing yet also decadent and fulfilling. All dispensed with quiet, attentive but unintrusive service and cooked in a kitchen with barely enough room to swing a cat. Like I said, it was all pretty amazing really.

And for £300 a head, well you would expect that at the very least, wouldn't you.

This of course is where I struggle slightly to make the sell because that is rather a lot of money. I do have to ask myself, if I hadn't been invited, would I ever stump up the cash for such a trip? I am not sure and it's funny but during our journey, the subject of a rather costly pop-up popped up in conversation. Everyone at the table (except the PR of course) concluded that that ticket was just too expensive and yet slowly, after making the collective statement, I think a certain irony dawned on all of us. Christmas lunch on the Orient Express is very expensive too. But in order to justify it, I think I have to come back to that excitable octogenarian, who by all accounts was celebrating her diamond anniversary that day. You see, what the Orient Express offers is that once in a lifetime experience, that grand sense of occasion, that one thing to do before you die. A lot of envious eyes widened when I told friends and family that I had dined on the British Pullman. One Uncle said "don't tell your Aunt for gawd sakes, cos then I will HAVE to take her, she's been banging on about it for ages". That wouldn't have happened if I had mentioned the words 'Thomas Keller'. And so, with much history, heritage and romance behind the brand, I would say that it is very much worth it in that respect.

As for watching the trainspotter who ran off the edge of platform 2 whilst filming our departure, well it would have been worth shelling out £300 for that too*.

Thank you to the Orient Express for a wonderful, if somewhat sticky afternoon. The Christmas Lunch excursions start on December 4th, bookings can be made here. 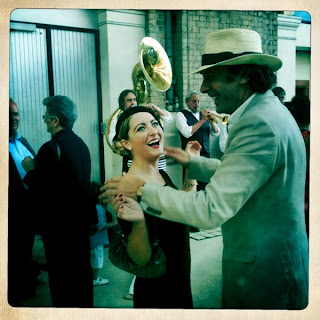 "Ha, did you hear that chap broke his poor old leg" 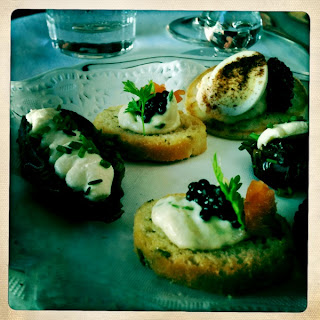 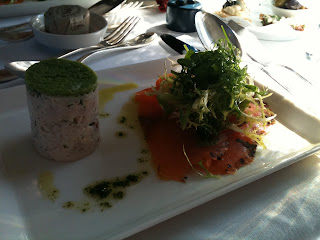 Tian of Whitby Crab and Atlantic Prawns, accompanied by a Gin and Tonic Gravadlax 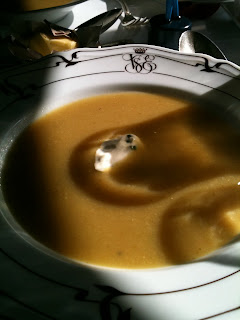 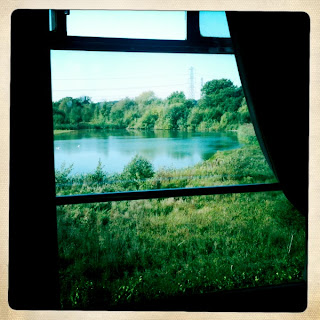 The scenery on a beautiful Winter's day 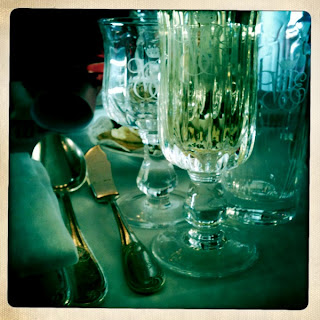 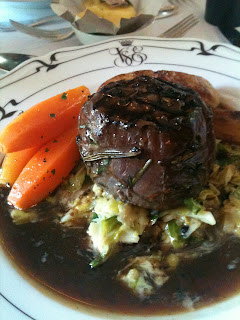 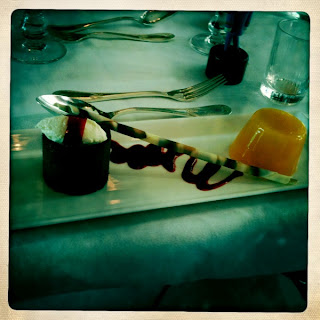 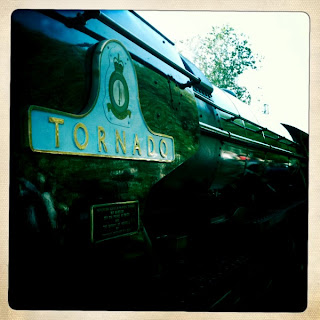 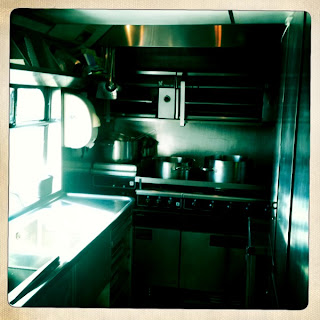 Possibly the smallest kitchen in the world?

*That didn't really happen but it would have been so funny if it had, eh?
Labels: GTT review

PDH said…
I walk past the Orient Express on my way to work or just out and about. Have always wanted to try it, this sounds like it was a lot of fun... Well apart from the heat!
11 October 2011 at 11:58

Brian Smith said…
You are right on all counts. It *is* expensive but it's also worth it. These journeys are special from beginning to end. My wife and did the Canterbury Christmas Carols trip for my 60th birthday - yes, the once in a lifetime trip. But we so enjoyed it that we have made four further trips - three on the British Pullman and one on the Northern Belle.
I would thoroughly recommend anyone to try it. You'll love it.
11 October 2011 at 12:55

Kavey said…
As excuses for not coming to dim sum on my 40th, I guess this is good enough!

I love the idea but know darn well I'd just not be willing to stump up £300 for posh lunch on a posh train when that amount would allow me a weekend away or a couple of very very fine meals in posh restaurants in London. Both of which I'd probably prefer.

Annie said…
It might have been your photography but I did think that actually - unusually for "gourmet" high priced food - the portions looked positvely generous. In my "is it worth it?" deliberations that's quite important ;-)
11 October 2011 at 14:47

Food Urchin said…
Pavel - It was brilliant fun despite the heat!

Brian Smith - Thanks, it was the hardest thing to consider when doing the write up and whilst the price will split hairs, I fully appreciate that a lot of people get a lot of pleasure from these excursions.

Kavey - yeah, pretty good excuse eh. Consider it for your 50th, when you're rolling in it.

Tara Cardwell said…
Looks fabulous - would have been better with a light frost though ;-)

Hampers Delivered said…
I have always wanted to do one of these...the Orient Express would be amazing but the Tornado looks VERY good too as does the food! Mmmmmm the soup looks and sounds so yummy!
29 November 2011 at 14:01