Cornish Rarebit (Or The Rabbit That Went Too Far) 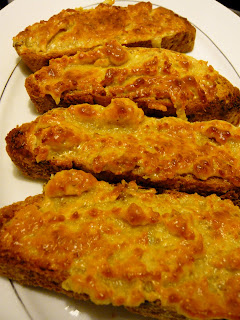 Cornish Rarebit
As a young teenager, getting up early on a Saturday morning was never the best of prospects and it used to take more than a gentle nudge from my father to get me going. After several exasperating shakes, it wasn't uncommon for him to just grasp my ankle and pull me off the bed, out into the hall and down the stairs whilst I clung onto my duvet for dear life, moaning with each thud on the step. A cruel and callous alarm call some might say but he was only trying to instill a strong work ethic, I did after all have a job on Romford Market to go to. Pitching up when the weather was fine, was well quite fine really but when it was grey, dark and drizzly, it was horrible. Swinging around cold lumps of steel on your shoulders to be slotted into position often resulted in nipped fingers and blood blisters. Tarpaulin to be hoisted above and straightened in a downpour would always dip at some inopportune moment and unleash a torrent of freezing water down the back of your neck. Boxes full of women's bras and knickers were suprisingly heavy, back breaking even (I mean how heavy can bras and knickers be?) and had to be carried from a grotty Transit van, like ten miles down the road. An exaggeration but remember, I was a teenager and they exaggerate everything. But once everything was done, there was just enough time to grab half an hour in the market cafe before the first round of meandering pensioners came along to inspect triple G cups, dangling on high from clothes pegs. And every Saturday, as I waltzed into the steaming throng of chatter and clatter, I would order the same thing, a mug of tea and a plate of Welsh Rabbit, the highlight of the day and just reward.

I remember always being quite curious about the phrase 'Welsh Rabbit' and would often extrapolate at length about the origin of the name with my fellow market workers at the table. Who were all about the same age as me and all named Danny, strangely. "I mean it's just cheese on toast innit," I would often sniff. But one of the Dannys had a theory that historically, this dish was symbolic, that it was a culinary signpost which signified the struggle of Welsh peasantry under the oppression of English nobility down throughout the ages. He would rant, "they kept them poor you know, they kept them poor for centuries and you know what? They had the audacity to mock them for the food they ate. The bastards sneered because all they could afford was cheese and when they did manage to get their hands on some meat, which was usually rabbit or something, the bastards laughed at that too!!" And with that, he'd normally smash his fist on the table and storm off out the cafe, leaving us to rue his words in silence until eventually, one of us would mutter, "blimey, Jonesy is touchy today eh?"

That never happened of course. We were all teenagers remember, prone to exaggeration and more intent on wolfing down the savoury delight within 5 seconds of it being laid on the table but I really did used to ponder about the name, honest. To this day, I am still partial to a bit of ol' rabbit. Although now that I've grown into a handsome, intelligent gentleman, I tend use the term 'rarebit', which sounds far more sophisticated, if not even more elusive. And perhaps we should clear up at this point that rarebit does not simple involve melting cheese onto toast. You have to go lot more effort than that and there are a lot of variations out there. Last Sunday evening I made a very good rarebit indeed, a Cornish rarebit this time, having gleaned a recipe from the recently refreshed and updated Great British Chefs website.

Now I have to be honest and say that really I shouldn't have gone ahead with this delicious version by Nathan Outlaw because I had already stuffed myself silly. Dinner consisted of garlic and herb marinated pork belly, roasted over potatoes with celery gratin topped with breadcrumbs and walnuts and a vegetable julienne, followed by poached pears and ice cream. And whilst preparing the feast, I kept nibbling at wedges of 3 year Davidstow Reserve which quite frankly is perverse in the extreme. Simply put, it is crumbly, crunchy, creamy, cheese sex. So really I should have been fully sated but at some point, later that evening fate seemed to take over the driving seat. Having spotted Nathan's take on rarebit and knowing that there was some Davidstow left in the fridge AND knowing that Nathan and Davidstow have some kind of association, I felt that it was my manifest destiny to make some for a very late tea. I am really glad that I did because it was bloody gorgeous, bursting with tangy flavour, mustard warmth and (dare I say it) umami goodness. But at the same time I kind of wish I hadn't. Because after eating, I spent the rest of the evening in a dairy coma, lying on the floor, spilling all over the place, dreaming of Lady Gaga.

Which is not good.

But if you are equally fond of rarebit (or rabbit) then you really should try this recipe (with Davidstow Reserve if possible). 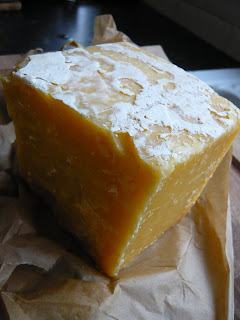 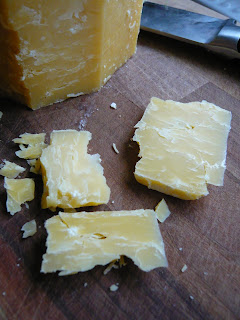 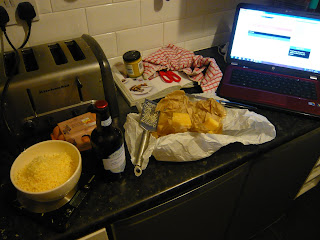 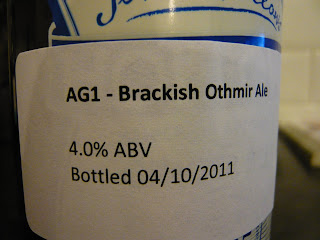 This beer, brewed by none other than Pete Drinks, may have helped out the soporific process too
Labels: cheese rarebit recipe strange dreams

Miss Whiplash said…
Noone except me seems to think that Welsh Rarebit shouldn't just be cheese on toast At All, but should, in fact, be an actual bechamel based cheese sauce plonked onto a bit of toast and grilled.
Surely would have been even cheaper for the poor peasants...?
But I seem to have been the only person that grew up eating it that way.
My mum is Actual Welsh though, so I guess maybe I'm right and you're all wrong :-)
9 November 2011 at 00:11

The Grubworm said…
I guess it stands to reason that Cornish rarebit would be the best there is... In all seriousness, it does sound very good indeed, and there is something so primal, so deeply comforting and delicious about cheese on toast (no matter what fanciness you subject it to).

And to think the sexy cheese came from davidstow. When I was growing up that's where your dad would take you for driving "lessons". There was an unused airfield that you could bomb - um - drive carefully and sensibly around without fear of collision.
9 November 2011 at 07:55

Gin and Crumpets said…
I wish I'd eaten before I read this, because that looks/sounds fantastic. I want sexy Cornish cheese on toast.
9 November 2011 at 09:59

Kavey said…
Whippy, I'm in agreement. Cheese toast is cheese toast. Rarebit is not the same...

And as for Cornish rarebit, can't see anything different so it's just a case of nationalism/countyism getting in and resulting in the rename of a dish that is rightly called Welsh rarebit/ rabbit.

Goodshoeday said…
Where did you get the reserve cheddar from no mention of it on the website :(
Anything with cheese is good in my books whatever its called
12 November 2011 at 09:42

Food Urchin said…
Miss Whiplash - seems I was a bit vague as to what rarebit actually is on this post and you are right in your description but having a Welsh mother, can you tell me if there's any truth in Danny's theory?

The Grubworm - primal, deeply comforting, delicious and induces the strangest of dreams

Gin and Crumpets - but you've tried it now, yeah, huh?

Kavey - ahem, I did point out to peeps at GBC that perhaps they should recommend Cornish cheese or beer be used in the recipe, no change as of yet

Anne said…
And yet another reminder I've still not tried a rarebit/ rabbit, think the name always puts me off but I am quite convinced I will love it! Looks like super charged cheese on toast and delicious! And that reserve cheese looks lush, will have to try some!
12 November 2011 at 11:26