Baking For The New Boyfriend 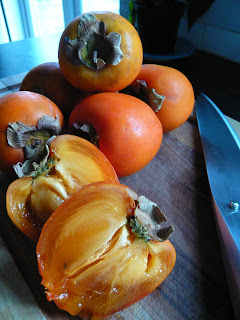 Persimmon
During the early stages of romance, as things begin to flourish and blossom, there are many possible perils and pitfalls that seek to beset us along the way. But once we get through those initial episodes of nervous drunkenness, coughed up popcorn and inopportune farts at the restaurant table and plunge headfirst into a sordid world of heavy petting and seat wetting (you know, as people do when they are getting to know and really like each other), the next real test of any burgeoning relationship is the first introduction to family and friends. Because I think once you've done that, that is the sign that things are getting serious. Although I do know of people who have left it for years before introducing their partners to parents. Sometimes even on the night before their wedding.

And so with that in mind, when my little sister announced before Christmas that she was bringing her new beau around to our house to meet up for the first time, I quickly realised that as an older brother, I had to deal with the situation with maturity and sensitivity. Unfortunately Mrs FU vetoed most of my suggestions for the night which included my dressing up as a butcher, complete with cleaver and smothering myself in blood. She also said I should leave the car engine totally alone and not even consider bringing it into the house and that any kind of physical joshing was absolutely out of the question. I wasn't even allowed to ask the new boyfriend for an arm wrestle. However, I was desperate to show some kind of masculine authority, some kind of upper hand. She was my little sister after all and I wasn't going to let any kind of plonker waltz along and whisk her off into the sunset. And my God, there's been some plonkers in the past. No, I was going to show this guy who was boss, I was going to bake him a tart tatin.

This was to be no ordinary tart tatin though. This was going to be a persimmon tart tatin to serve up as the finale of a sumptuous three course meal. In one fell swoop, I was going to show off my skillz as a chef and get to use these strange orange-red fruit that had been hanging around in our Nigella Lawson porcelain bowl (exclusive to Debenhams) on the kitchen side. A misguided tasting of one earlier in the week produced a cat's bum pursing of the lips such was it's astringency. But after a further period of waiting, the persimmon had finally begun to soften becoming juicy and sweet as candy. Just the thing to put into an upside-down, caramelized, spicy, boozy, tarty type affair and just the thing to bamboozle the new fella who probably hadn't even heard of a persimmon before, let alone see one.

Imagine my surprise on the night.

Me: So Russ, enjoy that meal did you? (dabs mouth with tea towel, leaning back on chair)

Russ: Yes, it was lovely thank you.

Me: Bet you've never had pheasant before, eh?

Russ: Oh I have, but yours was great.

Me: Yeah but that lamb was pretty special, eh? Slow roasted that was. 5 hours.

Russ: Yeah, I love slow roasting, it really works well with pork belly too doesn't it.

Me: What did you make of the weirdo-mondo fruit tucked inside? Strange, eh? (motions with fingers)

Russ: Yeah, shame you don't see them more often. You've got to make sure they're ripe though, don't try eating them at all when they're hard, persimmon will suck your mouth dry in seconds. But you know what's really great about them? They're packed with vitamin C, really good for you. Where did these ones come from Dan? Spain?

Mrs FU: Do you know where they come from Dan?

Russ: Yeah, bet they were from Spain.

Me: Do you want an arm wrestle Russ?

Me: Course he does, big man like you Russ ain't scared of a bit of arm wrestling..

Mrs FU: Dan? Are you alright?

Tori: Why are you holding your hand like that?

Mrs FU: Where are you going Dan? What's wrong with your eye?

Mrs FU: How tall are you Russ?

4 very ripe, juicy persimmon, trimmed of leaves and fibrous core cut out and then cut in halves.

Take a 20cm wide frying pan and over a medium to high heat melt the butter and sugar, adding the spices and stir occasionally until everything begins to bubble. Then add the persimmon to the pan, flesh side down and cook in sauce for 10-12 minutes, shaking the pan from time to time until the persimmon are nicely caramelised.

Add the brandy and tilt the pan so that the alcohol catches and bursts into life with flames (I really should have done this part later in the evening when the new boyfriend first arrived). Flambé and when the flames dies out, turn off heat and put to one side to cool. Once cool, rearrange the persimmon flesh side up in the pan.

Pre-heat the oven to 200C/180C fan and roll out the puff pastry to thickness of a pound coin. Using a plate roughly the size of the frying pan, cut out a circle and place over the persimmon, tucking the pastry under the fruit.

Place in the oven and bake for 15 minutes. Take back out and carefully pour off any excess juice (if any). Lower the oven temperature to 180C/160C and place back in for a further 15 minutes until pastry is light and golden.

Cool to room temperature and serve with cream 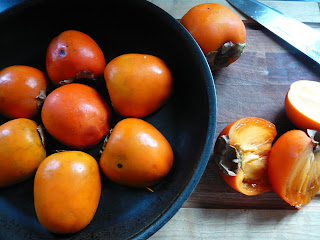 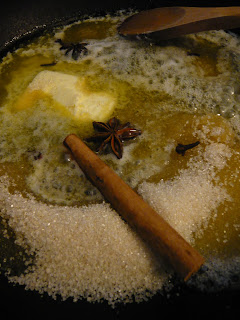 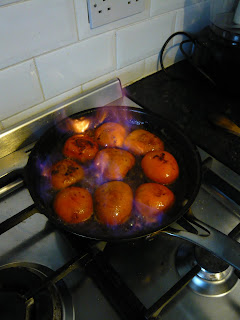 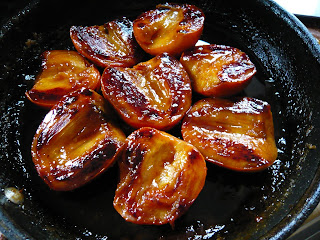 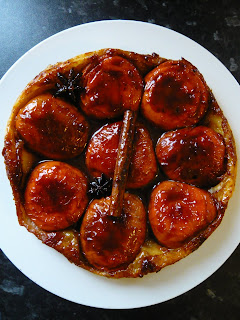 Cooking Gorgeous said…
We lived in Portugal for a few years and got badly caught out eating an unripe one - just thinking about it makes my mouth pucker up (and not in a good way)!
10 January 2012 at 17:53

Food Urchin said…
Craftilicious - glad to be of service ; )

Katy Salter - as long as he doesn't eclipse me in the kitchen department! grrr

Kavey - God, I am remembering the first time I met my in-laws, woke up on their living room floor I did (long story)

laura@howtocookgoodfood said…
Funny, I have just read a post on persimmons over on Anissa Helou's blog. I am intrigued to try them when they're not quite ripe, but have to say they do look so good once cooked. Boyfriend was bound to have been quietly impressed ;]
10 January 2012 at 20:21

@fruitandvegboy said…
Danny, I love this - great post. As brother to three younger sisters I understand, I really do. Let me know if you want more persimmon (on second thoughts, I should send some to Russ. As well as being 6ft 4, does he also write a food blog...)
10 January 2012 at 22:37

Shu Han said…
HAHAHAHAHA. hilarious. anyway I'd say that poor guy's a keeper too, lighten up ;)

persimmons are delicious, my mum loves them to bits. I grew up with them, so can't say they're that exotic to me either, though I only discovered their beauty a few years ago. great to use them in a tart tartin!
11 January 2012 at 14:48

Matt Inwood said…
You do make I laugh. Brilliant post. You are Alpha Male's Inferior personified in every way but for your rapier wit, potty mouth and half-decent recipes. I salute you and would gladly lock bear grips and forearms over the dinner table with you.
14 January 2012 at 03:37