Out of all the seven deadly sins that I am prone to (and I am pretty much prone to them all), the cardinal sin of sloth is the one that often snares me the most. It really is the one that I like to hang myself out to dry on because my head is always full, always teetering with good intentions and vim, to get out there and truly do something different with my life. And yet time and time again, these plans, these ideas, which always sprint off headfirst at breakneck speed, often suddenly slam violently into a wall of farty, apathetic, laziness. It's something that gets to me a lot, I am forever beating myself up but I don't know what to do about it. The crazy thing is that I am not actually lazy, I work very hard, bloody hard. I procrastinate too much though, that's the problem I think. I've lost count of the times I've sat down at the computer, flexed my knuckles and set about writing up a blog post or plan some new food adventure or tried to work out a book proposal even:

Maybe I'll work it out at some point and very soon I hope. But in the meantime, whilst we're on the subject of indolence and torpidity, I thought it would be fun to write a quick post about a development in the world of baguettes, involving the sandwich chain Eat and their buggery with bánh mi.

So yes, Eat have recently launched their very own take on the Vietnamese classic, the Bánh Mi or in their case, the 'Very' Spicy Chicken Bánh Mi. And I picked up one recently, out of curiosity really and while I make no claim to be an expert on Vietnamese cuisine, I felt confident enough to pass this verdict. Now, this may or may not have been fair. After all, Eat do a fair to middling line range of products. But in all fairness, it really wasn't that good. The bread was far too dense and heavy. The chicken was saturated and pappy in a mayonnaise gloop. Shredded carrots and mooli were listless and sodden. And the chilli heat, smeared on as a base sauce, coating the bread, was far too hot, tasting like the "Extra sexy super chilli hot?" regret of a Friday night doner kebab. No, not good at all. And so I consigned the whole concept to the dustbin of history, never to be repeated again.

Then I popped to City Caphe earlier this week and one of those strange, whirlwind ideas came flying into my head as I stood in the substantial queue. 'Perhaps, I should order their chicken bánh mi and buy another one of Eat's version to do a test comparison? Yes, that might be good, perhaps I've been too harsh on poor old Eat,' I thought to myself. And so soon after, I found myself in a nearby park, sat on the grass, in the sunshine with two baguettes in front of me, looking like a proper glutton. That other sin I have issues with.

The resounding result didn't need much deconstructing really. City Caphe's baguette was far, far better. Light, crisp bread, succulent pieces of lightly spiced chicken, crunchy carrot with slices of red chilli and fragrant coriander leaves. Made with finesse and care and attention. It was delicious. Whereas the baguette from Eat, well it just reinforced my original conclusion. It was shite.

But what is the point of such an experiment anyway? Aside from pouring ridicule and pity on myself, I am sure my fellow park grazers were wondering what the hell was I doing eating and photographising two baguettes, the point is this; why launch a new type of sandwich to your customers when it's plainly obvious you don't give two hoots about it in the first place? Why offer a generic, modified, plasticised, Westernised version of an original? Why not be brave and introduce something to your audience that is authentic, different and vibrant? I think the answer for Eat lies at the feet of Sloth. And I don't mean that wonky-eyed, muscle bound dude from the Goonies. No, I mean it's just plain lazy. And therein lies the problem. Despite the great strides that apparently are being made with regards to this country's food cultcha, this sort of laziness will always put us on the back foot. Food prepared and served this way to the masses only waters things down to a bland, extraneous point of acceptability. This a shame and it irks me somewhat and probably needs a proper route of enquiry but this is all I can muster for now.

But hey, at least I don't feel so lazy after writing that. It's a start, eh? Clash of the Bánh Mi's 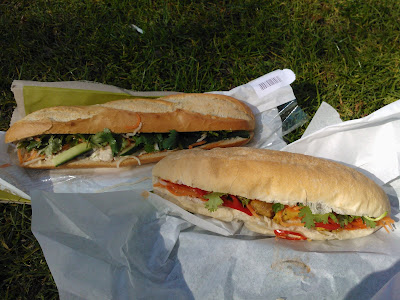 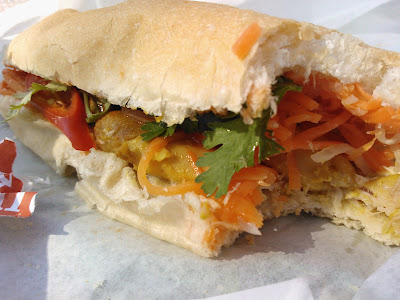 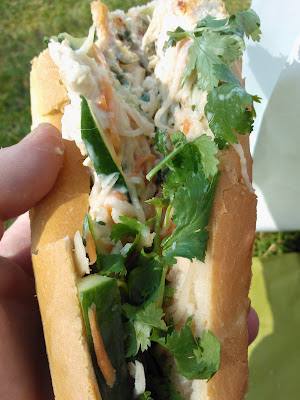 meemalee said…
Have you tried the Pret one yet? Mr Noodles of Eat Love Noodles had a pretty strong opinion about it ;)

Don't get me started with Eat anyway. Till recently their "Pho" was made with egg noodles and they appear to have invented a dish called "Udon Ramen".
30 March 2012 at 16:23

Matt Inwood said…
This really shouldn't be the interesting read you've made it, you lazy procrastinating git, but it is, it always is and I for one will forgive City Caphe their appalling name and hunt out their bahn mi before Eat's, all the wiser for Food Urchin having put his palate in the firing line so we don't have to.
31 March 2012 at 07:54

Food Urchin said…
Meemalee - What did Mr Noodles have to say about Pret then?

Lisa - hmm, do you think I should.

J@Feasttotheworld said…
If you get a chance, you should pop down to berwick street market and try the Bahn Mi 11 authentic take on it.....I'm sure it will be much, much better than EAT. I've eaten and written about it. Still remember their crusty fresh baguette and the superb imperial BBQ pork filling.
31 March 2012 at 16:06