Pairing wine with food isn't easy. There you go, I've said it.

Alright, it might be easy if you know a little bit about the stuff. About wine that is. To truly appreciate the grape, it's inherent qualities and characteristics and then to match it with food, well there are many, many processes to master. Or so it would seem. You see it's all about vinification, classification, appellation, degustation, from all across the nations and even then, the learned expert (who has to undergo a rigorous bout of sommelification) doesn't always get it right. Many's the time in a restaurant, have I asked a wine steward for their recommendation to accompany my meal and ended up spitting the wine out in disgust. This usually happens upon finding out the price of the wine from the list, rather than have anything to do with the quality. But in all honesty, I have on occasion sat through a tasting menu, spooned a mouthful from the plate and slurped straight from the glass and thought, "Erm, I don't get it. Where are the fireworks?"

So where do we go from here?

Well it's an interesting question and it's one that I have been asking myself a lot recently because I put my hand up to take part in a competition run by The Bureau Interprofessionnel des Vins de Bourgogne (think Men In Black but with corkscrews). The remit was to simply come up with a food pairing to go with Chablis, one of the more sophisticated, swankier incarnations of Chardonnay that exists out there in the big, bad world of wine. And for while I was stumped. Even after sampling the best part of a bottle that was sent, a Les Domaines Brocard Chablis, 2007, no less, I was still stumped. Luckily they also sent me a Chablis Premier Cru, Les Vaillons 2007, Billaud-Simon and after tasting that, the magical genie deep within my cerebral cortex began to muse, design and reminisce from the past.

You see there is a lot to be said about personal experience when it comes to thinking about pairing food and wine. And as I let the flavours of the Les Vaillons wash over me, something strange started to happen. I don't know if it was the nose, clean with an element of soft creaminess. Or the dry, crisp, mineral notes on the palate. Or the combination of apples and citrus with just a slight hint of herbaceousness but it was as though the Chablis was furrowing through history, ploughing the terroir of my mind.

Snapshots of a holiday in the south of France before the arrival of children, in the undulating peaks of Le Fenouillèdes, began to focus in and out. A tiny gite in a tiny, tiny village, set in a cauldron-like valley where swallows would race round and round as though on a cycle track before soaring majestically into the sky. Silent mornings, spent with doors open in the listless heat, lying on our bed, peering through the cracks of our toes. Bikes and baguettes, riding through cobbled streets. Trips in the car to the sea, listening to foreign radio against crashing waves. A birthday, a celebration, a visit to the supermarche and then to a poissonnerie with pointing fingers and brief, muted embarrassment and then back home. Mussels and clams steamed in wine, squid and prawns quickly fried, linguine boiled and tossed into a shabby old colander. Oil, garlic, some chicken stock and tomatoes in a pan over heat and then stir through the shellfish. The pasta gets curled into the middle of the bowl, an island for the seafood ragout before herbs, finely chopped are sprinkled around. Good old Mr Stein, he never lets you down. And then the wine is brought out, a similar crisp, acidic Chablis, very gently chilled. A kiss, then a sip and as we eat, the sun slowly sinks out of sight, leaving us quite alone, in our quiet field and everything is just perfect. 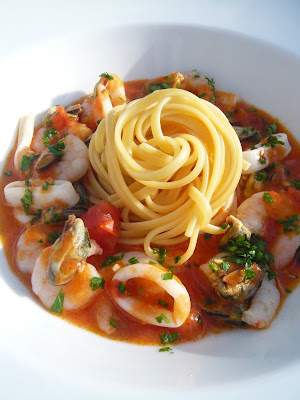 So my ideal match for Les Vaillons Chablis would be a Seafood Ragout with Fine Herbs and Linguine. 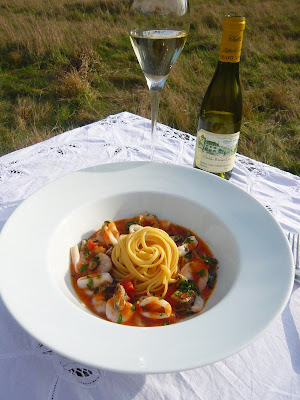 To be enjoyed alfresco, during the last remaining rays of the day. 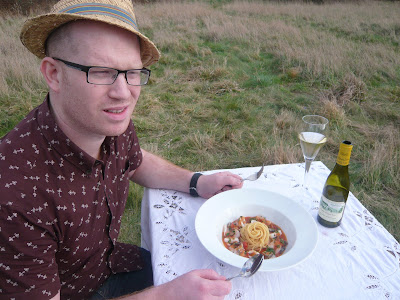 Except this isn't the field I remember. 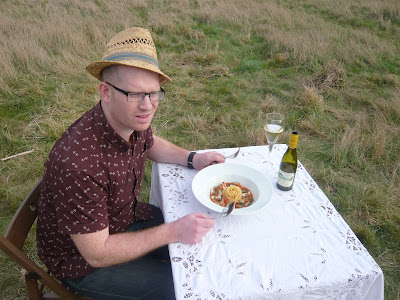 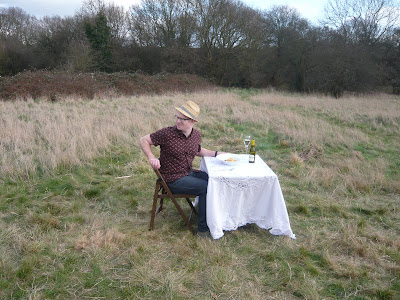 How did I get here? 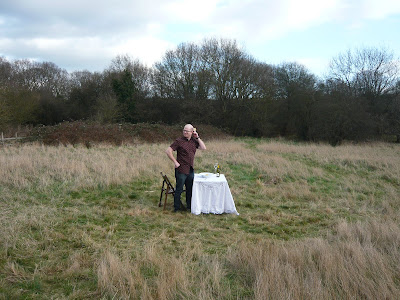 You know, I suspect I've been thinking about this wine pairing just a little bit too much.
Labels: Chablis seafood wine

Alicia Foodycat said…
It looks good. I think all the best wine/food pairings I have ever had have been more by good luck than good management.
12 March 2012 at 07:06

The Grubworm said…
Wine and food matching takes you to all sorts of odd places - both metaphorical (how do you really describe wine sensibly) and physical. Loving the memories and the field they dumped you in! Great dish too.
12 March 2012 at 09:04

Platter said…
Ah, your imaginary holiday memories took me back to so many wonderful jaunts that never took place in my childhood.

laura@howtocookgoodfood said…
That is just my kind of pairing. What more could you wish in life. Great setting!
13 March 2012 at 20:03