It doesn't happen that often but every once in a while, I have the misfortune to come across the sort of swollen, pompous, know-it-all, misanthrope who's only endeavour in life is to look down their snotty nose and lixiviate their ill-formed, arrogant opinions all over the place. Spluttering, through rubbery lips and with an air of disdain, the words they speak are usually only ever self-serving, sneering and sardonic. After issuing forth, they will often then gaze down from their imagined pedestal or cushioned cloud of indulgent wind and smirk, safe and warm in their own smug coitus. Their unwanted declaration the equivalent of a five second wank.
For want of a more crisper, concise description, for now, let's just call them 'Food Snobs'. And like I said, I've met a couple in my lifetime.

I'll never forget the suited gentleman queuing behind me in the sandwich shop who guffawed after my order.

Or the sommelier who bulked at my appraisal of a glass of red.

"Hmm, farmhouse isn't really a word I would associate with this. Earthy, straw, robust maybe but definitely not farmhouse."

Or the time, when asked what I like to do with leeks, a well known food writer and editor, retorted, somewhat vehemently, "Well well, make soup eh? My God, that is so imaginative."

Naturally, I take these sorts of encounters in my stride, often compositing a scenario in my mind where I simply smile back and then suddenly lunge forward and rip their heads off with one bare hand, Wing Chun style, blood spraying everywhere, howling like Bruce Lee. And then I am back in the room, carrying on with the rest of my day. However, a couple of weeks ago, a particularly horsey female character very nearly got the real deal.

I was in Neal's Yard Dairy in Borough Market, set with the task of buying some cheese, as you might well expect. In fact, prior to this, I had put a shout out on Twitter asking what I should buy and the resounding response came back as "Cheese", therefore confirming my suspicion that the majority of my followers are sarcarstic bastids. Although, thankfully, I don't believe them to be snobs. Well, maybe some of them. Anyway, in the shop I approached a rather solemn but helpful and attentive, bearded cheesemonger (another thing, why are there mongers in cheese and fish but not in meat or baking? I'd like to meet a meatmonger one day) and simply said that I was after an all-round selection. Without further ado, he pointed me towards the goats cheeses, asking if I had any particular favourite and I replied that really, I knew sod all about goats cheese. So with a swift swish of the knife, he peeled off a slice Tymsboro, an ash-coated unpasteurised cheese and handed it over. As I put it up to my mouth, I was shoved forward and a scatter gun shriek burst my left eardrum.

I turned around to look and zero in on where the penetrating, nasal cawing was coming from and behind me stood a Barbour quilted, doggy smelling, faux-blonde bouffant with flashing eyes and hints of rosacea. She stared at me hard and long and brusquely asked yet again, "Well, is it fudgy?!" At least I think that's what she said, I suspect that class and years of in-breeding had left her without adenoids or any propensity to form words such was her clippyness. I simply shrugged, as if I no speakadaenglish and so she huffed at my apparent moronity, scooped the remaining goats cheese that was on Beardy's knife and then went to the other end of the counter whilst shovelling it into her mouth. Or maybe it went up her nose. I can't remember.

The rest of the shopping experience went past rather uneventfully after that. Beardy and I just carried on with our business and I left Neal's Yard happy with the decisions I had made. Yet as I walked back to the office, a sense of paranoia and annoyance crept up on me. What was that all about? Was she simply making an enquiry in her own special way? Or was she, via some extraordinarily loud bleating, asserting her own authority on the matter? "I BLOODY WELL KNOW WHAT I AM TALKING ABOUT AND YOU DON'T, YOU PLEB!" It sort of felt like that. And that narks me that does, that sort of bloody food snobbery. So I have been making enquiries, as part of a plan to fight against it, to strike out whenever it occurs and stamp out this disease once and for all.

It comes in the form of a stamp actually, a custom made rubber stamp that will languish in the inside pocket of my jacket alongside a red ink pad. It will say "Food Snob." With "twat" in a smaller font and in brackets. And if I ever come across this sort of pretension again, I will simply pull the stamp out, calmly emboss it with ink and casually and silently press it on the forehead of the perpetrator. And then walk away.

It's not quite the same as ripping heads off but it will be just as satisfying. 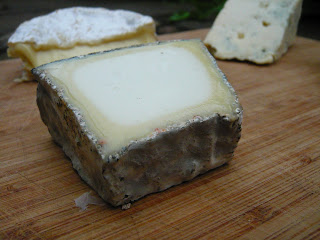 Tymsboro (lovely, tangy, creamy but not really that fudgy)

meemalee said…
IS IT FUDGY?

Tara Cardwell said…
I've already got my own stamp (nothing near as useful as yours would be!) but the lovely lady here will put whatever you want on stamp for £15 http://bunnyzoescrafts.com/index.php?main_page=index&cPath=6&zenid=0p92h1r22odrfkrm1grkknq8b5 Go on I dare you - and I think a certain "food writer and editor" should be the first recipient of a stamped head!
22 June 2012 at 15:00

Mm, if you're serious about it, I've used this store before for my design projects and they're good ;)

Food Urchin said…
Lynne - You can have a stamp

Griffster - You can have a stamp

Chloe - You can have a stamp

Meemalee - You can have a stamp

Craftilicious - You've got a stamp

Shu Han - You've got a stamp

Lesley Meadows said…
Thing about food snobs is they're all prejudice and no tastebuds. I know a couple who'd probably lick the ink off your stamp and describe it as curiously reminiscent of elberberries after a thunderstorm. Could be fun to test this theory.
22 June 2012 at 17:06

Unknown said…
I just spat out my coffee laughing, excellent and well justified post. My boss gave the 'sho-ri-tho' talk once, we haven't had the same relationship since...
24 June 2012 at 14:20

I think I had the same bearded cheesemonger selling me the same goat's cheese at the RAW wine festival a few weeks ago. And no, I don't have a clue as to whether ir was fudgy but boy did it taste good!
26 June 2012 at 00:22

Kavey said…
She sounds like a complete and utter nob snob.

Dan said…
First of all. Nice selection of cheese. Tymsboro and in the photos background do I spy Tunworth and either Beenleigh Blue or it's goaty cousin, Harbourne?

Food snobs deserve to be stamped, bravo for the initiative mate. Being from Essex and genetically unable to pronounce anything exotic sounding correctly, I'd quite often be the subject of food snobbery. Older, wiser, uglier, I nowadays bulldoze onwards oblivious and say things any damn way I please.
28 June 2012 at 08:23

Anonymous said…
I am waging war against food snobs - check out my blog www.thecriticalcouple.co.uk
28 June 2012 at 16:39

Food Urchin said…
Lesley Meadows - lets arrange a meeting so that I can stamp their tongues then.

Dom - that was your mum? you know, I thought she looked familiar

The Little Dinner Lady - I battle daily with the shor-ee-tho thing. Sometimes I take care to pronounce, other times I just let rip with the ol' "I'll 'ave some choriZo please darlin'" *sniff*

Sophia - was he very serious?

Kavey - one day we will meet one

Dan - correctamundo my friend, you clever boy, you truly are a cheesemunga

Quality Kitchen Goods said…
I have had my share of snobs too. I just figured they are not worth my time. I can imagine how startling and irritating "Is it fudgy" lady must have been. But it's sort of hilarious in a cartoonish kind of way too.
29 June 2012 at 04:34