It has been very quiet on the Food Urchin Supper Club front lately. Mostly because I have been a busy man. A very, very busy man. I have been keeping this under my hat but well, you see, one of my many, many part-time jobs involves shaving legs and most recently I was the leg barber for various members of Team GB's cycling team. Yes, I was the person chiefly responsible for keeping thighs and calves silky smooth, in order to gain those extra, vital seconds. And if it wasn't for my efforts, the likes of Wiggo and Hoy would never have got those gold medals. It was a dirty job* but someone had to do it and now that the games are over, I have more time on my hands to concentrate on cooking, feeding and other epicurean adventures.

It will be held at FU Towers in Hornchurch** on Sunday 16th September, a bit of a depart from the usual Saturdays with an earlier start of 1:30PM and the four course menu is as follows:

Grilled Meats with Aioli and Roasted Peppers and Aubergines

All for the handsome price of £25 per head, including free tap water and home baked bread.

If this has got your taste buds tingling and the ol’ mouth watering, then please contact me at foodurchin@yahoo.co.uk to book a place.

The Furch (as those flying, cycling boys used to call me) 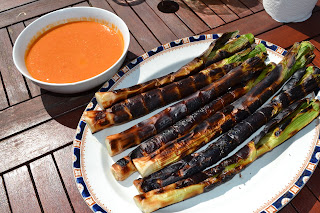 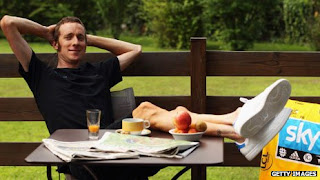 Just look at those legs, that's my handy work that is

*I wouldn't mind, I only went in for the job to get the chance of shaving Victoria Pendleton's legs but she wouldn't let me anywhere near her, nor would any of the other girls.

*** The leeks are a substitute for calçots, which, as you may or may not know, is an allium or onion-like vegetable popular in Spain and traditionally eaten in Spring. Very delicious and very messy after dipping in the romesco sauce, we'll supply bibs and paper towels.