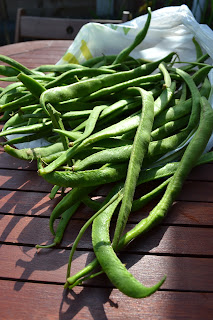 Runner beans
In terms of growing fruit and veg, this year has been a very tough one down at Norfolk Road. The enveloping greyness and perpetual drizzle that we have encountered for most of the summer has really taken its toll, not just on our plot but across the allotment as a whole. Yields are down, weeds are up (vine weed in particular) and the onslaught from pests and disease has been merciless. The hatred I have developed for slugs and snails is now bordering on the psychotic. Not content with leaving tiny turquoise pellets of death, scattered upon the ground, I have taken to wielding my shovel, like Sláine of 2000AD fame, muscles warping and spasming as I go into berserker mode, at the merest sight of these damn molluscs. The gleeful crunch and splatter is hardly humane but have you seen what these parasites have been doing my cabbages?

The damp and warm conditions have also given rise to the deadly occurrence of Phytophthora infestans or blight as it is more commonly known. A couple of weeks ago, when I popped down to check on the courgettes, I noticed a sign on the main trading hut that, in short, went along the lines of:

So I ran around to our plot and there before me lay a desolate wasteland of withered shoots, seemingly besmirched beyond repair. However, after dusting off my knees and wiping my eyes, I had a chat with some of the veterans. They told me that as long as we took quick action to cut and clear the offending shoots, taking them well away from the site to the local dump, then hopefully, fingers crossed, that would be enough to stop the fungus from entering and ruining our beloved spuds. So at present we are keeping a very close eye on them. Even so, in issuing words of advice, the old guys uttered them with a slow, disbelieving air, shell-shocked, staring a thousand yards off into the distance. They were obviously hit by blight too. Oh yes, baneful 2012 will go down in folklore at Norfolk Road, with sad recollections over pints in the pub, ending in “You weren’t there man, you weren’t frigging there.”

It hasn’t been total doom and gloom though, as some crops are doing quite well. Varieties of chard and spinach continue to shoot through with spirit, cavolo nero and kale remain robust and after the recent burst of sunshine, our sweet corn is looking very good indeed. And we’ve got tons and tons of runner beans. You might deadpan a cheer and unenthusiastically wave a flag at the mention of these legumes but I am becoming quite partial to them, especially when they are young and fairly small. I recently made a batch of runner bean chutney, using a recipe by the great Fnar himself, ValentineWarner and found myself pleasantly chomping away on raw tidbits as I was chopping away. After commenting on Twitter on how surprisingly sweet they were, a young lady named Pooble Moo (not her real name, I am sure) replied, saying that runners were her one of her favourite vegetables and that she often ate them raw in salads. She expounded with further suggestions and I tried one last night. So seeing as I haven’t done a recipe post in a while, I thought I would pass this on, as it is rather good and very simple. A sort of crunchy, fresh, green coleslaw, to accompany roast chicken or to eat on its own.

One note though, if you try this with larger runner beans, a quick blanch in boiling water for 30 seconds and refreshing in ice cold water wouldn’t go amiss. And having one of those nifty bean slicers would make lighter work. I did start off by slicing neat, even juliennes of crisp bean but then I became very impatient and began chopping with furious abandon.

No finesse, that’s me.

500g of young runner beans, sliced thinly (try and discard the actual pink beans within, not too fiddly really after rinsing under a tap in a colander)

Combine the sliced runner bean, apple and shallot in bowl; add the hazelnuts and parsley combine a bit more.

Mix together the olive oil, vinegar, salt and pepper to make a light vinaigrette and combine with all the other ingredients. It’s all about combining really.

Told you it was simple. 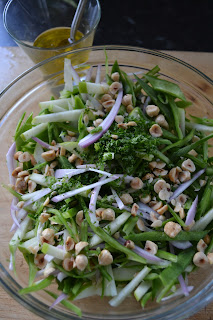 Don't forget to combine those ingredients 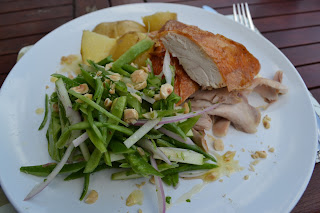 Josordoni said…
That looks very yummy Danny, I love runners, and they make a splendid salad. I prefer mine cooked, they are a little too squeaky when raw for my taste, but I love the idea of mixing with apples and shallots. My garden apples are just coming ripe, still good and sharp, so they would be perfect for this. I'll let you know how I get on with this, with the beans a bit cooked.
21 August 2012 at 11:04

Tara Cardwell said…
Have you tried nemaslug? It's some kind of slug parasite that you scatter and it gets in their blow holes and kills them - keeps you slug free for weeks. http://www.nemaslug.org.uk/ I used it once when it first came out and it did work for me.

Runner beans are my fave veg too - I just love them cooked and served with butter though. I have my mother's ancient bean slicer which is falling to pieces so now I know you can get the proper ones (not those round ones which are rubbish) I'm off to get another one - no way I'd slice the buggers by hand! Definately go to give the salad a go.

Unknown said…
Ah yes. The slug. We used nematodes too but they didn't work this year. My suggestion is to train a hedgehog to stay in your patch. They love a nice juicy slug. Nice salad but I must say my favourite runner bean dish is runner beans and gravy... heaven!
21 August 2012 at 17:51

Kavey said…
2012 shall be remembered as the year of the slug... the little BASTARDS!