Once upon a time, two guys, bespectacled and besmirched with balding bonces, sat in a pub and over a pint or two (or was it five?) scribbled down a menu on the back of a beer mat. This menu was to be an unusual one, an impassioned ode to the pluck, the innards and the gizzards of beasts, birds and swine. Or in other words, a menu based around offal.

Deliriously happy with themselves, they then set upon testing some of these ideas. One glorious fun filled Sunday in particular comes to mind. Liver was thinly sliced and delicately wrapped with sage and streaky bacon around wooden skewers and then flash fried. The crispy outer skin combined with yielding, tender liver inside and a smidgen of melodious salvia was an instant hit; around 20 liver lollipops were tested and consumed that afternoon.

The innovation of a meat pie based solely around organs was more of a roller-coaster affair. Expectations of a heart, liver and kidney combo were high and the first emanating smells from the oven certainly had promise. But after a tasting, the textures weren't quite right; these organs, organs that once upon a time, worked in perfect symphony didn't quite work together in the afterlife. So the said gentlemen retreated to the garden to sit, pause and think, with bits of puff pastry stuck to their faces. Children were around also that day and a peculiar game of 'throw pastry around the kitchen' evolved out of nowhere.

Suddenly, the taller, skinnier baldy of the two, had a Eureka moment.

"Let's just pimp up the classic steak and kidney," he exclaimed. "Let's get some onglet which has a great offal flavour. And some shin and some kidney and create a tongue-in-cheek homage to magnificent Pukka Pie! But ours will be much, much better."

"Yes," replied the shorter, wider but curiously more handsome baldy. "Or even better than that, let's get some Fray Bentos pies and cook the pies in the empty tins. That would be a sweet touch, ironic even. I bet you if I get in touch with their PR and ask for them to send us a load of their pies, we can just ditch the shit stuff and put our delicious stuff in instead!”

“Are you going to explain this to the PR?”

More testing and conversation has taken place since that fateful day and after one last, shexy* Skyping session last night, these two epicurean adventurers nailed down the final elements of what will be a truly fantastic supper club night. Which will take place in just under a fortnight on Saturday 29th September, at Food Urchin mansions in Upminster.

I am of course the shorter, wider baldy from the tale; the taller, skinnier one, is none other than the mighty Paul Hart, who writes the no-nonsense How Not To Do A Food Blog blog.

And here is our menu:

There are currently 10 spaces left so if you would like to reserve a place please contact me at foodurchin@gmail.com

*Shexy because Paul and I always Skype in just our pants. 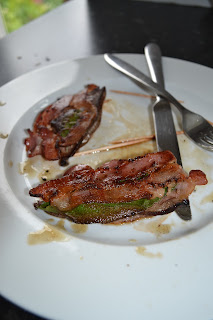 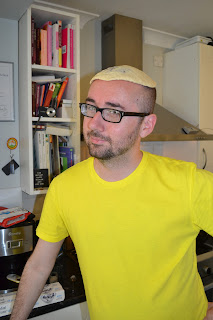 Anonymous said…
That's a truly funny post but you should make pair sorbet out of testicles and sugar.
18 September 2012 at 14:27

Unknown said…
bugger shit bollocks i'm not here on that date and this would have been right up my street, I adore offal... I could send down some Lincolnshire Field Eggs if you like...
18 September 2012 at 19:23

Shu Han said…
Would sign up for this in an instant if not for the fact that my supperclub is on the same night! Eh, I mean it about the rendang/ rabbit/ mooncakes in exchange for leftovers.
19 September 2012 at 15:02