It's not often I find myself in agreement with chief pudding fondler, Gregg Wallace but I fondly remember the occasion when on MasterChef a few seasons ago, he slapped a damning verbal indictment on some poor contenders spag bol.

"You know what, even before I taste this, I know this ragu isn't going to be up to scratch," he said to the hapless, wide-eyed soul, barely concealing his contempt before following up with:

"A good ragu needs to be left overnight."

And with that, he slammed his fork down like a choleric judge passing verdict and the contestant shattered into a million pieces. It was a harsh thing to do but to my point of view, it was fair. Because surely, everyone knows that the longer you leave cooked food, the better it tastes. OK, I am not talking about that pot of leftover Haddock mornay, or pan of devilled kidneys; I am talking about about things like soups, stews, tagines, rendangs, chille con carne and the ubiquitous spag bol. Left quiet and alone, to congeal and coagulate whilst covered in the fridge, these frugal liquid dishes will almost always grow in stature and flavour. I say almost because there is a tipping point. Over the hill and far away lies a land of uncertainty, stomach cramps, vomitus, bum gravy and possible death, so you do have to be careful. Saying that, a chef once confided in me that if he found a foil tray of chicken vindaloo behind the sofa, forgotten, a week after drunken purchase, he would be more than happy to eat it. Provided that it was heated beyond 75°C. Harold McGee might have something to say about that and personally, I wouldn't take the risk. I get twitchy after around day 4 and unless I have the foresight to freeze (which often goes out of my head) into the bin I throw, like a naughty, naughty food waster. Tut tut tut.

But still, there is something interesting about the mechanics behind it all, the chemistry, the alchemy of this developing flavour. Science suggests things like oxidisation and that the processes of heating and cooling play a large part; it could even be down to the invasion of those dreaded microorganisms. Excreting bacteria may well add a certain je ne sais pas pourquoi to your Saturday night daube when eaten on a Tuesday morning. But I like to think that something more magical is happening. Something more intangible and serene. When I made a lamb tagine earlier this week, I like to think that the ingredients I introduced to each other were initially shy and that the room was full of pregnant pauses. But over time, they got to know each other, shared a few stories and found common interest. They then went on to have a few drinks and let their hair down. The star anise got off with the apricot and the raisins, chilli and cinnamon all did the conga around the glass bowl. The onion, lightweight that he is, was found draped over a cubed shoulder of lamb and he proudly declared at some point to the tomatoes and the chickpeas, that they were are all his bestish pals. Before falling over and passing out.

The party however, sadly, came to an end yesterday but it certainly finished on a high note as I scraped the last remaining morsels onto my plate, thoroughly heated through of course. And I have to say, what started off as a good, standard Moroccan stew anyway certainly transformed over time. It's hard to describe without delving into a world of terminological food wankery but, yes, in comparison to the first session of eating, the flavours definitely became more denser, richer, warmer and vibrant. Absolutely and indubitably, oh yes. So please do have a crack at this lovely tagine but do leave it for a couple of days before serving up. The rewards will be greater and well deserved.

Even if you do find yourself muttering at the table, hissing through gritted teeth, that Gregg was right.

The recipe for this Lamb Tagine is by Geoffrey Smeddle and can be found here at Great British Chefs. 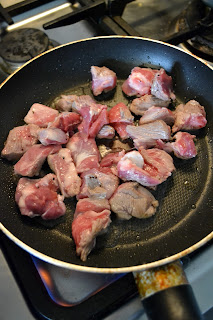 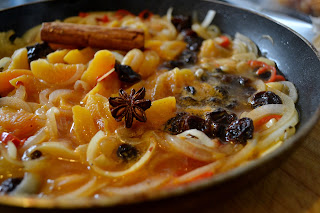 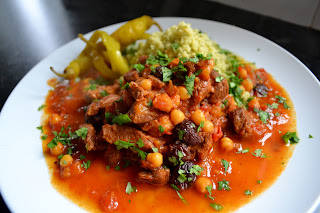 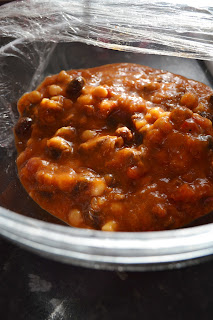 Lynne said…
you are the onion, aren't you?

I am right, aren't I.. no point in lying, don't forget I read your drunken Tweets...