Earlier this year, I was asked if I would like to submit a short piece on the subject of omelettes to a food magazine; which I did and then sort of forgot about. I wasn’t paid or anything, I was just happy for the opportunity to get my work in print. However, as far as I am aware, the following eight hundred words never made the light of day, which is shame. I think this was down to the fact that the publication went under, which is also a shame. I can't be sure.* So I thought I might as well pop them on here, to provide a little light relief on a Monday morning. Although once you get past the third paragraph, it might not be appropriate to use the term ‘light relief’. Whatevs man, have a little butchers anyway. 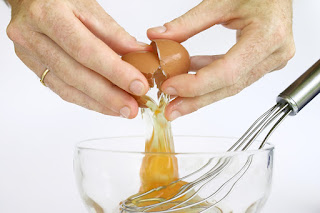 
To make the perfect omelette these days, it seems that you have to commit certain acts of violence and impropriety. Or so you would think; if the methods of James Martin and his cohorts on Saturday morning telly are anything to go by. Many a time now, there have been occasions where I have found myself lounging casually on the sofa, in a lazy weekend daze, supine and cosy, watching the screen, when suddenly I’ll leap up and recoil in horror. And as events unfold in front of my very eyes, I’ll often find myself reaching for the nearest cushion.

It’s the chef’s challenge to whip up an omelette in ten seconds flat that always gets me because it truly is a gruesome thing to watch. To start, we are treated with nervous grins and banter and then bang, the gun goes off. Butter browns and burns immediately in blistering pans. Shells are smashed and yolks are plunged into bowls with fragments flying. Competitors execute a tenuous stir and throw forth their viscous, yellow fluid like cold tea from a builder’s mug. Then the sweaty panic begins and the air is punctuated with grunts and clatter as pans frantically jig back and forth. Cameras focus on faces, furiously frowning, gurning, spilling lolling wet tongues. Finally, an alien-like, greasy, gooey mass is expunged onto the plate, brows are wiped and the supposed omelette gets dissected with an apprehensive, prodding fork.

To be frank, watching the whole affair makes me feel quite sordid. As if I’ve witnessed some initiation ceremony, at the back of some dusty dorm, in some nameless public school.

But how did it come to this? Surely the art of cooking an omelette is all about finesse, deftness of touch, and care and attention. The French folded omelette is a simple one to master but it does take time getting there and it’s no wonder that this classic remains the litmus test for any chef entering a new kitchen. Get the pan hot, add a generous knob of butter and pour in a couple of vigorously beaten eggs, seasoned with salt. As it begins to set, lift the edges to allow any liquid to run underneath, continue lifting and gently shake. With a plate (or palate knife, if feeling confident) flip and lightly brown the other side. Ease the omelette back on the plate, fold over and you are done. Now where’s the wham, bam, thank you ma’am in that?

Personally, I favour the more robust versions of omelette, the Spanish tortillas and the Italian frittatas where the egg serves to bind a family of ingredients and flavours together. And when you consider food waste, these types of dishes are a boon. I found this out at university. Remember that dry, dilated half onion on the top shelf of the fridge, that wizened, shrunken pepper on the bottom of the fridge and that solitary potato with tubular creeping shoots, crawling out from underneath? All ingredients way past their best but sliced up and fried and laid out under a blanket of whipped golden protein, seasoned with herbs, vegetables such as these can be transformed in something magical.

Frittatas, in fact, became my signature dish and at the end of a boozy night out, house-mates would gladly donate whatever rotten, stale, half-eaten morsels they had, so long as there was a box of relatively fresh eggs hanging about. Those 3am feasts soon came to an end though. I neglected my post one night, taking to the comfort of a sticky, lanolin floor because my head became too heavy. However, piercing screams from our fire alarm soon roused me from my slumber and as smoke filled the kitchen, I looked up at the oven hob and I could tell from the flames that: a) we weren’t going to be eating that night and b) I had just lost a sizeable chunk of my damage deposit.

Stalin, somewhat apocryphally, is often attributed with coming up with the idiom, “You can’t make an omelette without breaking eggs.” Which does lean a dark and sinister bent to proceedings. When standing at the kitchen side, in front of glass bowl, with an egg in one hand and a whisk in the other, the atrocities of a madman couldn’t be any further from my mind.

But there have been times, when I’ve happily cracked that egg and then spied a piece of shell, floating atop a quivering pool of albumen. Well, the rage that erupts from inside, the seething tumult that explodes within; the inner voices that proclaim that all of humanity is puerile, is soiled and must be extinguished. Well, it’s terrifying. And it does make you think, when you consider the inherent violence of making one, that sometimes, nothing ever good can come from an omelette.


*Notice that I have steered away from the notion that the piece might not have been good enough.
Labels: egg writing

meemalee said…
I like the omelette challenge. Seeing chefs arse around in the kitchen wearing their best "casual wear" makes me laugh.
29 October 2012 at 11:44

Unknown said…
the problem is that every time I make an omelette I think of that dreadful challenge... like you say and omelette should be light and airy and filled with love, something that TV chefs seem to bypass... nice piece, shame it was never put in print.
29 October 2012 at 17:42

Shu Han said…
Glad you posted it in the end, lovely piece of writing. I find the omelette challenge amusing, sometimes shocking. I like to take my time with my omelettes. And I like my omelettes robust too, loaded with leftover bits. And horrors, I like them fragrantly golden brown, not pristine and a pale anemic yellow. So I would probably fail at the omelette challenge anyways.
30 October 2012 at 15:15

Belleau Kitchen - it's very.....competitive and a throwback to machismo in the restaurant kitchen.

Shu Han - I worry about the condition of James Martin's stomach afterwards, though I am sure that SK use very, very fresh eggs.
31 October 2012 at 22:02