The Scotch Egg Challenge at The Ship 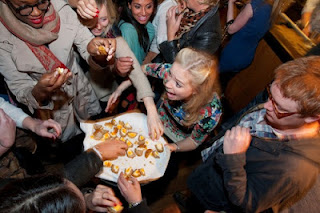 Kick out the Scotch Eggs Muthafunkers!!

If food is the new rock and roll, then scotch eggs are the equivalent of punk. A strange assertion to make, I know, given the humble nature of this popular dish. But after the raucous and rowdy scenes I witnessed last week, people certainly seem to be getting their kicks from breadcrumb, sausage meat and egg based snacks these days. With bodies pressed against the stage, sporadic bouts of moshing and flagrant displays of flipping ‘the bird’, I would have mistakenly believed that I was at a Motorhead gig at one point; if it wasn’t for the juxtaposition of Barbour jackets, rugby shirts and glasses of wine dotted about the place. 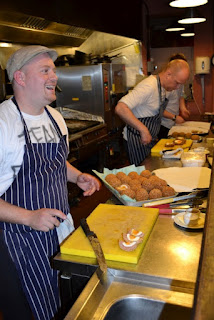 Egg Boss vs The Coach and Horses

Still, throw into the mix a gladiatorial spectacle of chefs doing battle, sweating and gurning with knives flashing in front of a braying crowd and well, the scene becomes even more surreal. Waiters and waitresses stage dive in with plates of freshly fried, cocooned oeufs and hands snatch forward in frenzied adoration. Whilst in the background, a buxom, blonde compère threatens to smash her microphone stand over someone’s head. Like I said, very rock and roll and all rather bonkers crazy really. But I should have suspected it I suppose, this was the Scotch Egg Challenge after all. 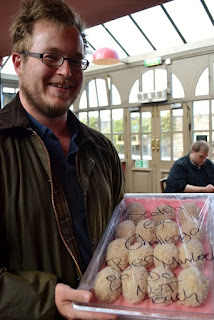 This competition, brain child of Oisin Rogers and held at his pub, The Ship in Wandsworth, is only in its second year but already has all the makings of becoming a firm favourite on the food calendar. The premise, as you might have already guessed, is to find out who is currently making the best Scotch egg and anyone can enter. Although the only proviso is that all eggs entered must be available in a retail outlet somewhere, be it on a restaurant menu or over the deli counter. So naturally, a lot of the big guns were intent on shining their eggs in the spotlight, with names such as The Hinds Head, The Modern Pantry and Opera Tavern heading up a list of 24 entries. 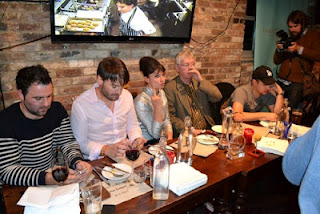 The enviable task of judging this year fell into the laps of pâtissier extraordinaire, Eric Lanlard; rockabilly food Queen bee, Gizzi Erskine; Fortnum and Mason’s consultant chef Shaun Hill of the Walnut Tree; renowned Bubbledogs head chef James Knappett and egg fanatic and host of last year’s Challenge David J Constable of forevereggsploring.com. I say enviable, they did have to get through sampling 24 different scotch eggs, which couldn’t have been easy. In fact, just at the start, my fellow spectator and blogger Paul Hart blurted out “My God! This is like Cool Hand Luke for the morbidly obese.” And he had a point; but I reassured him that surely, as sponsors of the event, Fortnum and Mason would be handing out bags of luxury prunes to the judges at the end. 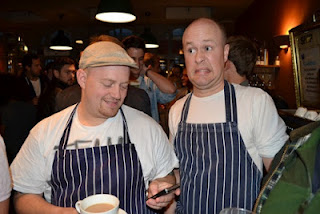 With each team allocated 15 minutes to fry and prepare 10 scotch eggs (with 3 teams in the kitchen at any one time); proceedings did take a turn for the manic. Two eggs from each team were sent forward for the judges to try and the rest were divvied up for the audience, with often unsporting consequences. Our aforementioned compère for the evening, beer writer and sommALEier, Melissa Cole did well in trying to keep everyone in check but for future events, The Ship would do well to employ a different strategy of distribution. Like employing a couple of heavies to part waves through the scrum. Still, the atmosphere was good humoured and I managed to scarf a couple of the eggs coming out of the kitchen. The Coach and Horses, for instance delivered a fine, traditional example and hats off to Duck and Waffle for their out of the box, curried haddock egg. 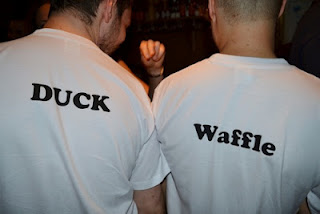 Dunno who these guys are

However, the judge’s decision reigned supreme and the winner of the evening came in the form of a ‘ham, egg and chips’ homage from The Bladebone Inn in Berkshire; with the Hinds Head truffled quail, Iberico sausage meat and lardo coming second and London’s Drapers Arms, taking honourable third position with their popular black pudding and pork with panko breadcrumbs. 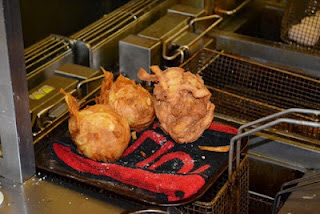 The winning Scotch Egg! (I think)

David Constable gave his Best Scottish Egg Award, which to my mind was the better looking trophy of the four available, to Peyton & Burne for their braised pigs cheek and shoulder, with oatcake and crackling crumb. 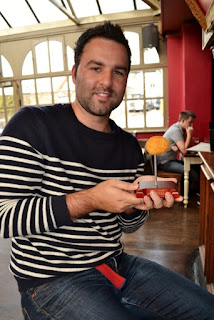 No expense was spared in making this trophy

The next day I emailed David, who was apparently feeling quite delicate after his efforts the night before and I asked him “Where can the Scotch Egg Challenge go from here?” His response was this:

“I think the event has worked on so many levels, particularly showing people that the real Scotch egg is something truly special and not consigned to those ones you'll find in the fridges at petrol stations or some cold nightmare orb you were given in your school days. The Ship use their social media presence fantastically well and this arguably made the event - and of course, they do a damn fine Scotch egg themselves. The Scotch Egg Challenge is clearly building in momentum. Its popularity has grown without question. How long the public will continue to arouse excitement from the bar snack is a mystery, but there's something there with Fortnum & Mason supporting the event and the media wanting to cover the Challenge in their various forms. And of course, the crowds (those devoted golden-orb supporters) who crammed in for the second year to watch, taste, pick, neck-back and gawp at the competing Scotch egg.” 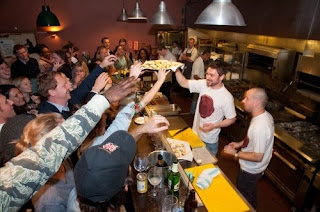 Well I know I’m up for it again, if it goes ahead for a third year running; I just need to find my old hobnail gig-going boots first. 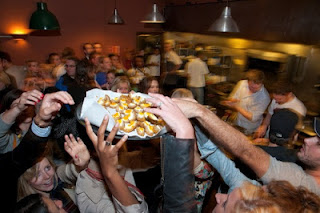 Ethan Marcotte said…
This is a nice concept and a challenge. Foodies will definitely enjoy.
12 September 2013 at 12:32