The Ultimate Cheeseboard for Christmas (for Organic Milk)

The arrival of the cheeseboard on Christmas Day can be one of two things, depending on your point of view. It is either a triumphant, riotous fist, punched into the air with pagan and Bacchanlian joy; or it marks the beginning of a descent into the depths of misery, gluttony and despair. There are only two options (although one might suggest that the two are intrinsically linked) and I have endured both. Every Christmas night, when that platter is placed upon the table, laden with barked blocks and circles of warm, veined, slightly sweaty cheese and flowing, glistening fruit; well my heart goes cockahoop. Or maybe it murmurs. Whatever, I bloody love it. Yet give it an hour or so and you will often find me lying on the floor, prone and groaning, cursing the Gods of the cheese and their wicked ways; tearfully sniffing and muttering into a glass which magically evaporates port.

It. Happens. Every. Year.

Does this sort of behaviour qualify me as an expert on dairy consumables? Probably not, but in any event I was asked recently what sort of cheese would I put on an ultimate cheeseboard for OMSCo; an organisation that promotes organic milk. I went for Tunworth. Which isn't actually made with organic milk, although this article in The Foodie Bugle suggests that the milk comes from a herd local to the dairy and plus it is unpasteurised. So it does score some points on the ethical scale. No matter though, in my opinion Tunworth is a handsome devil of a cheese to eat and in the past, I have been known to devour the best part of a round before going to bed and embarking on some hallucinatory journey, early on Boxing Day morning.

And however uncomfortable ghosts the may be, that come to plague me in the night; my excuse is always the same as old Ebenezer Scrooge. That their visitation was the result of an undigested bit of beef, a blot of mustard or a crumb of cheese. Never that last glass of Cockburns. 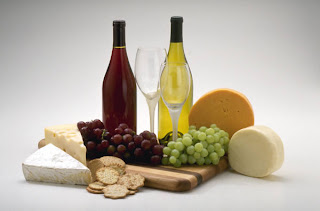