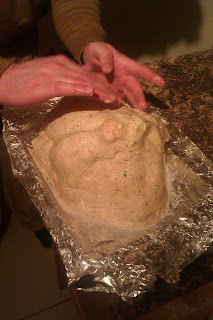 Have you ever sat down in front of the television box and watched a cookery show, of which there are squillions and squillions, and thought, "You know what, I am going to have a crack at that." No? No, of course not, why should you? If you are sat there on a Saturday morning, legs akimbo and having a good ol' scratch whilst Nigella does her thing with a tongue and whisk, the last thing you are going to consider is dirtying your oven. You might be thinking about other dirty things when watching these programmes, especially that James Martin. My god, he is so sexual and powerful that I believe that his musk permeates over the airwaves and enters your front room via the speaker grilles. But dragging out 12 roasting tins and a burnt piece of pork belly (from Sunday family dinner, circa 2006) from the oven is usually the last thing on your mind. Because, let's be honest now, most food telly simply serves as food porn in this country. Salacious, cheeky, entertaining, yes! Aspirational, informative, instructional, no! As a nation, it is simply our duty to sit agog and dribble on our shirts, to coo and aah, to capriciously buy cookbooks at Christmas time so that they may gather dust on the shelves and to ponder on the relationship that Nigel Slater has with his deli store 'friend.'

OK, there are times when I have seen something and thought, "Hmm, now that really does look interesting," and have proceeded to try and replicate the dish from screen to plate. It does happen on occasion and when we recently stayed with friends over New Year, my mate John showed me a clip from Masterchef, namely Michel Roux Jnr's Honey and Rosemary Chicken in a Salt Crust and urged that we should try it out. It did look impressive, so I agreed.

Now the main drive behind this post is not to merely applaud the virtues of this method of cooking chicken, although it did work very well. In the immortal words of the suspiciously skinny Michelin starred chef, the meat was indeed 'beautifully moist' (oo-er) but was it straightforward? From a point of view of following a recipe off the telly? Was it easy? I am not so sure.

Imagine for a second, two guys, getting ready to prepare a sumptuous meal for New Year's Eve, poring over an iPad and pouring glasses of wine. We scrutinised the five minute video again and set to work. "Flour, we need flour." "OK, we have flour." "Salt, we need salt." "OK, we have salt." "How much flour and salt Michel?"

"This is very versatile, it will always be the same recipe," he says on video but we have no actual 'recipe', no actual amounts. So we resort to speculation by scrutinising the iPad some more, whilst drinking some more wine. Educated guesses are made and after some mixing, it soon becomes apparent they are slightly wrong and the situation develops as thus:

Finally, a crude pastry is made and rested in the fridge. Next the stuffing.

"What did he use again?"

"Sausages! Yes, we have sausages!"
"Ah, breadcrumbs, chives, morels, chicken livers, do we have that?"
"No, we have Paxo though!"
"That will do!"

"The fugging crusty fing is falling apart, it's got 'oles in it. Michelle's didn't have 'oles innit didit?"
"I dunno, let's have a look."

Like I said, though served up late on New Years Eve, the salt crust chicken did come out very well in the end but only after viewing the damn clip about 100 times, which sort of reinforces my original point, albeit somewhat obtusely. I am not entirely sure that these television chefs really want you try out their recipes you see. They are just interested in giving tantalising, lascivious snapshots to keep the audience captive, holding back the real detail of the recipe, just to draw you in for the release of the aforementioned Christmas cookbook later. A book that will never really get used. Despite the plethora of food television out there, hardly any of it serves to educate properly. Never, as a nation, will we ever learn how to cook from the television. No, we remain captive drones, feeding off the honey that the televisions stations supply, sated by images of lascivious, dripping cheese, heaving bosoms and throbbing crotches. Yet throughout, our stomachs, hearts and brains starve.

And that my friends, is a pretty poor state of affairs.

Although it might have helped, if John and I hadn't got so p*ssed in the first place.

(Would have remembered to take photo's of the actual chicken too) 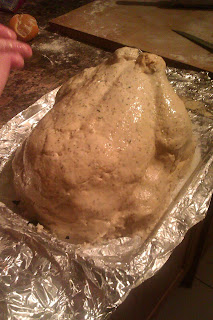 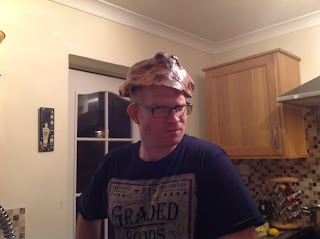 Tara Cardwell said…
I think it depends on the show - the ones that aren't purely PR stunts for the "soon to be released cookbook" are better at sharing the real recipes. I cooked lots of recipes from the couple of series of "Perfect" on the Good Food Channel as they link all the recipes to their website - this was definately the best dish I ever cooked 'off the telly' and is now a family favourite http://craftilicious-thecraftycook.blogspot.co.uk/2012/12/definately-best-lasagne-in-world.html

Unknown said…
Hahaha drunk cooking is so hard! Most cooking shows have their recipes on their websites...just sayin!
10 January 2013 at 14:09

Craftilicious - Francesco Mazzei eh? Hmm, that does look like a very good lasagne

The Little Dinner Lady - Yes, we discussed this fact the next day BUT IT SHOULD STILL BE MADE CLEARER DURING THE PROGRAMME I SAY!
10 January 2013 at 15:51

Unknown said…
What a fab post, this literally made me laugh out loud. I totally agree with your comments on foodie TV and also watched the masterchef episode with the salt crust chicken. You're a brave man for trying it and with such a great hat at the end, I bet you're glad you did!
13 January 2013 at 10:42

Anonymous said…
This made us laugh so much and kept me going as I attempted to make the same! Hilarious. Well done, boys!
10 February 2013 at 10:44