The Secret of a Good Spag Bol 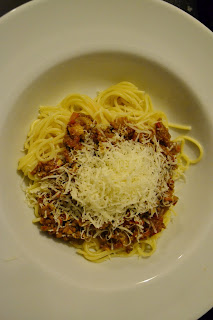 Spaghetti Bolognese or 'Spag Bol' is an habitual favourite in our house. The kids were weaned on the stuff and have graduated from fistfuls of blitzed, blended mush to the elegant twirling of fork in spoon, in what seems to be a short space of time. Using the word elegant is misguided actually, the mess remains the same. Pursed mouths start off clean at the start of the meal but with every suck and slurp of a wriggly worm, the orange circle that frames those cherry lips gets bigger and bigger. Until eventually, they end up looking like a pair of oompa loompas. Still, it’s fun to play with your food and at least pasta doesn’t get thrown at the walls these days.

For me, personally, cooking spag bol is the real fun part. If I can, I will kick off proceedings as early as possible, like before the school run. A bit of early morning chopping and frying is meditative and relaxing, especially when you are secreting carrot, peppers and celery into the mix. “Ha ha ha, you will eat your vegetables.” And I always make a large batch to a) freeze some of the ragu for future dinners and b) offset the guilt and cost of running gas under a stock pot for an entire day. I’ve soaked up this idea you see, gleaned from gangster movies, that in order to make a really, really good Bolognese, it needs to be cooked long and slow. I haven’t gone as far as to slicing up garlic thinly with a razor blade yet, so that it may liquidise in the pan but I might do one day, because it looks like a really good system.

With regards to recipes, methods and ingredients, the fundamentals remain the same but I don’t think I have ever categorically made the same spag bol twice. There is always a tweak or change somewhere down the line, depending on what spice or herb jar comes tumbling out of the cupboard after rifling through. Mistakes include cayenne pepper and juniper berries but fennel seed, nutmeg and even garam masala goes down well, in my opinion at least (cue howls of protest from Bologna).

The one universal element I do stick by is Geo Watkins Anchovy Sauce. I use it every time. Not at all fishy and intensely savoury, this browny-grey, fetid looking stuff goes down a treat and really lifts the Bolognese, adding a background notes of …..of ….. je ne sais pas pourquoi.

No, I really don’t know why but I also put it in a lot of other meaty dishes; in burgers, it reigns supreme. It just gives a hit of……………

I suppose really I am trying to avoid the word umami. And there you go, I’ve said it. It delivers a sucker punch of imaginary fifth taste umami and I love it.

One day, I may even take a bottle into the shower with me.

Spag Bol – serves 4 (remember, this recipe changes all the time but like the speed of light, anchovy sauce remains constant)

Method
Place a large, wide pan or stock pot on the hob, add your oil and heat over a medium flame. Add the onion, carrot and celery and sweat down until soft. Turn up the heat and then add the mince, stirring and browning all over. Throw in the red wine and cook until reduced and then add the garlic, pepper and mushrooms, again stirring through for a couple of minutes. Add the tomatoes, oregano, Lea and Perrins, anchovy sauce and a tin of water (from empty tomato can). Turn the heat right down and leave to gently simmer and bubble for as long as humanly possible. The ragu should thicken right down and if it starts to catch on the bottom of the pan, just top up with a little bit of water.

When ready to eat, after say a couple of days, boil a saucepan of water and add your spaghetti, cooking according to packet instructions or until al dente. Drain and divide between plates and then spoon a nice, generous portion of bol atop the pasta.

Scatter freshly grated parmesan cheese on top from a great height and serve. 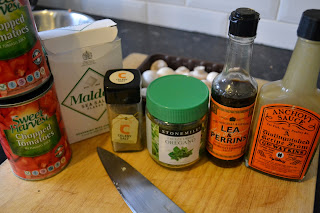 Plucked from cupboard obscurity (except the anchovy sauce) 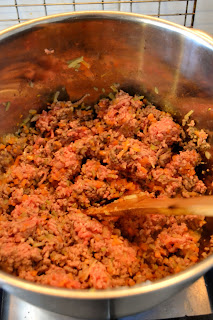 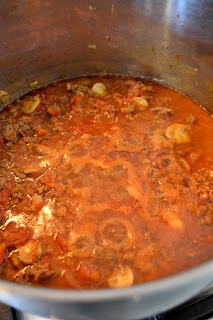 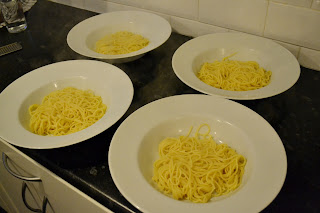 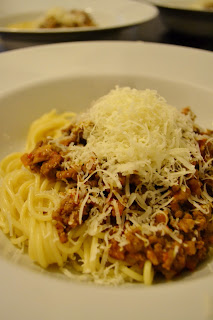 Matthew said…
I have a habit of chopping preserved anchovies into pretty much everything. You may have just made my life a little bit simpler!
24 January 2013 at 10:08

josordoni said…
oh yes Anchovy Sauce... I love it. I use Lea and Perrins in my bol but I guess it is the same anchovy hit that I am looking for.

Unknown said…
Good recipe. I use Mushroom ketchup in my Spag bol and a touch of grated nutmeg. I agree the longer it's cooked the more divine.
I also like Spelt pasta spaghetti, doesn't bloat like normal wheat and I find the lighter pasta means more sauce :-)
24 January 2013 at 10:24

TheGlutton said…
I have experimented with sooooo many recipes and techniques - no garlic, adding milk, red wine, white wine, using pork, etc... but it never quite has the meatiness. And now I know why. Now where off to find a tube of squeezy anchovies.
24 January 2013 at 10:27

Tara Cardwell said…
I use mushroom ketchup for the same savory note - will try the anchovy to compare.

My favourite seasoning to throw in is the gyros seasoning blend from The Spice Shop - it has greek oregano and cumin amongst others and really gives a good savoury background note imho.

For the meat I go with Francesco Mazzei and split equally between beef, veal and pork mince - perfect fat to flavour ratio.

Food Urchin said…
Matthew - That's what I am all about, the simple stuff.

Lynne - Yes, go out now and buy some anchovy sauce, no larder should be without it.

Kavey - well quite, Spag Keema is wot I calls it

Craftilicious - Gyros seasoning blend eh? Cumin?! Hmm, interesting, might give that a whirl.

Donna said…
Oh can't wait to try anchovy sauce in mine. I picked up a Locatelli trick from his complicated but divine book - I "condition" the meat in red wine before doing anything else, basically dumping 1/3 to 1/2 bottle of red into the browned meat, then letting all the wine simmer off. It is sooo delicious. I bet anchovy added in will give it that much extra depth too!
24 January 2013 at 14:14

laura@howtocookgoodfood said…
Yes to anchivies! Loving the idea of using essence in the bol sauce. I have taken to cooking mine for ages but now put the whole pot in the oven with a lid & leave it there for hours, lots of wine essential :)
24 January 2013 at 21:32

Rachael Huntley said…
This looks delightful! I have a similar obsessive attitude towards spag bol

Debs @ The Spanish Wok said…
How funny, I also add L&P and garam masals but rather than anchovy sauce I use a paste in my recipe which also finds it way into other dishes too.

Defo long slow cooking is ideal for spag bol. However as I cannot face minced meat I often make it with quorn for myself and beef mince for hubby and/or guests. Same with shepherds pie too.
25 January 2013 at 11:21

Shu Han said…
my spag bol recipe sounds pretty similar.. but minus the anchovy sauce. which, according to you, is the most impt element eh? hmm maybe that's what I've been missing all along.
26 January 2013 at 20:45

Adam said…
Sticking the rind of an old piece of parmesan as it's bubbling away is a method I use sometimes, It gives the spag bol a deeper savoury umami flavour, mushroom kethcup is good too. And I use penne, or fusilli.
26 January 2013 at 22:07

Debs - What's up with mince? The thought of unmentionables ground within the mix?

Shu Han - it's all about the anchovy sauce