Conversations are great, especially when you are not part of them. Sure, some incessant chatter can be annoying and inane. After listening to two 'bright' young things dressed as Mumford and Sons on the train the other day, I was this close (imagine a tiny space between my thumb and finger) to slapping them around the face with a wet fish. Except I didn't have a wet fish on me. And besides, it would have been a waste of wet fish.

However, there are times when eavesdropping is entirely pleasurable. When cupping your ear to someone else's world brings a wry smile to your face and melts your cynical heart. I was having lunch in The Tasty Cafe on St John's Street, a very workman-like greasy spoon, complete with a faded Pepsi sign on the outside and worn mahogany within. Run by a bunch of friendly Italian guys who have been in the business for years and years and years, the food is honest and cheap and the overall warmth of the cafe provides a welcome respite from the outside world. I don't pop in there often but when I do, I usually come over all misty eyed, whilst my inner prole whistles 'cor blimey, luv a duck' at it all and harks back to a time that I don't really know.

Sitting and waiting at a table for my order, with a mug of tea (builders of course), a fellow diner had his roast delivered and just as he was about to tuck in, his phone rang. This is not ad verbatim but his conversation sort of went along like this:

Yeah, yeah, I am still coming to see you later.

Yeah, I'm out and about, just working around the corner. Just getting my dinner in actually.

Aw Mum, you should see it. I went for roast chicken. Yeah, looks really good. The plate is piled with spuds and there's tons of chicken. I've got a leg and some breast meat. Yeah, it looks really tender and it's smothered with gravy.

No, no, no, I've got some veg too, some broccoli, don't you worry about that.

No, it's not as good as your roast Mum.

Alright then Mum, see you later, yep, don't worry, I'll be around the usual time.

See ya later then, love you.

And that was that. He was probably in his forties, faintly smattered with paint and he shouted down the phone, rather than talk normally. But the tone of his voice was full of love, enthusiasm and commitment. A public declaration of his feelings for his dear old Mum and for the meal he was about to have.

As I sat there, taking in all that he had said, my plate came up and suddenly I felt a swell of emotion rise from the pit of my stomach. Looking down, I contemplated my own mother, thinking and hoping that I, equally, was a good son to her. After listening to him, I even began to regret my own decisions for lunch.

Especially since I ordered salad to go with my lasagne. And not chips. 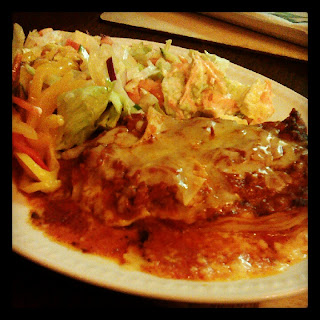 Food Urchin said…
meemalee - when weemalee arrives, perhaps we should take her there
7 February 2013 at 12:39

Alicia Foodycat said…
I must be hormonal, because that brought a tear to the eye. And now I want roast chicken.
7 February 2013 at 14:42