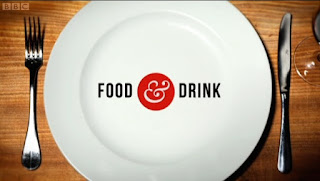 It’s not often I get to say things like this but the original series of Food and Drink was a little bit before my time. I do have some faint memories of the show, which reached its peak in the late 80’s before ending its run, quietly and discreetly in 2002. Mostly of wine critic Jilly Goodlen and her florid descriptions of plonk - “I am getting ecclesiastical loganberries nestled betwixt some bushes on the savannahs of the Serengeti. “ And I also vaguely remember Anthony Worrall Thompson impishly fondling some Victoria plums, whilst raising a titian eyebrow suggestively to the camera. But that’s about it. Back then, food television had to complete with Dungeons and Dragons and Michaela Strachan, so it’s no wonder that I hardly remember the programme. After all, what is food to a pubescent boy with a mullet and spotty chin? 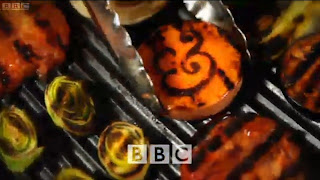 However, I am all grown up now and I have been watching the latest series, now two shows in, with keen interest. Updated and reworked with Michelin starred chef Michel Roux at the helm and with Kate Goodman matching the wine, this version certainly looks a lot slicker and crisper than its predecessor. Gone are the lurid, bright lights and technicolor studio and in comes the Ideal Home kitchen. Complete with high-tech ovens, clean neutral lines, plenty of space, a couch, a huge wine rack tucked in the corner and loads of natural daylight. It is quite possibly a kitchen that I will never ever know but it represents a great return of investment for the family that hired out their second home. 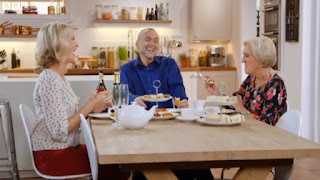 The mantra from the off is to look at the ‘what, how and whys’ of food and to delve into the current trends that influence us and it is Michel Roux’s job, resplendent in blue shirt, to get down to the nitty gritty of the food issues of today. So how has he done so far? Well, to be frank, so so really. There is no doubt that Michel is a fantastic, inspiring chef who can show the public a nifty trick or two, especially when demonstrating how to make a vegetable tart tatin or some deliciously delicate madeleines. Yet sometimes, his delivery and exposition can seem clunky. Watching Michel throw in a casual aside at the table, about world wide drought and the impact it will have on the cost of meat due to the rising price of grain, was whince inducing and painful. Sure, it's a relevant topic but the tone of 'good golly, what the bladdy hell are we going to do about this mess?' didn't sit comfortably with me. 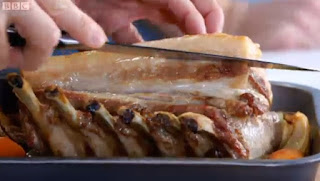 Of course, these sound bites serve as links into relevant features within the programme (or VT’s as they are also known) where a well-known food presenter will champion some produce or a cause within two minutes. So far we have had Stefan Gates argue the case for switching from meat to insects as a source of protein, much to the distain of the farmers he interviewed, both old and young alike. Oliver Peyton has suggested that in the UK, we should have a classification system, similar to that in France and Italy, to protect and promote indigenous produce such as single Gloucester cheese and forced rhubarb from Yorkshire. Rachel Khoo whirled around Paris to talk about the importance of buying local, artisan food and laughed maniacally at a box of cakes. And William Sitwell has revealed that he is in fact, proper working class, by arguing for the Chorleywood process and cheap white bread against the virtues of snobby, life enhancing, hand crafted sourdough. Although, I do suspect that Mr Sitwell was indeed playing devil’s advocate for the camera on this occasion, whilst his Roller was kept running outside. 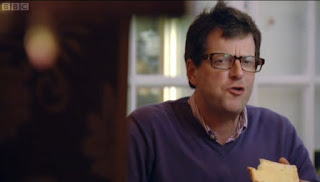 Guests have appeared in the form of Mary Berry, doyenne of baking, cakes and hollandaise in jars; and man mountain Tom Kerridge, proprietor and Head Chef at The Hand and Flowers. Now, is it me or does Mary seem to be everywhere at the moment? I know that baking in vogue, what with the recession and all that but she must be costing the BBC a small fortune. Tom Kerridge, on the other hand was great value for money and a man after my own heart. In the first episode, he brought a much needed sense of enthusiasm and humour to proceedings, extolling the threefold benefits of cider (for dancing, sleeping and fighting) and quite simply, he introduced a humble joy for food. You know how the saying goes regarding chefs and their size; well I would trust Tom with my children’s lives. Then again, have you seen his avatar on Twitter? 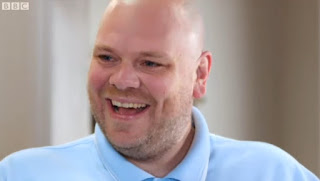 Sadly and maybe not through any fault of her own, the resident wine buff Kate Goodman seems to be the one who isn’t translating well at the moment.  If the remit of dumbing down wine has been put to her by the powers that be, and some wine producers are certainly encouraging this, then Kate has taken the bull by the horns. The explanation and information surrounding her choices for matching alcohol or soft drinks with the dishes that Michel creates is very limited indeed. Portuguese wine is Portuguese. English sparkling wine comes from England. Tea for afternoon tea is tea. And her vocabulary for describing the wines also leaves you wanting more. I am not wishing for the mad cat lady flourishes of old but it would be nice to discover more about the wine other than its “Acidity.” Kate obviously knows her stuff; she evoked an orgasmic “Yes! Yes! Yes!” out of Michel with her recommendation of an unknown Riesling but I am worried that producers have seen her little as an attractive blonde to stick on telly, more than anything else. 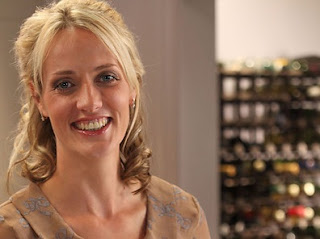 So two shows in* and my opinion is decidedly mixed. This is definitely not the Food and Drink of yesteryear. Yet the new show’s identikit approach has failed to capture my imagination so far and engage me properly. Rather than a revamp, there is a foreboding sense of a rehash about the programme, cobbling together bits and pieces of food telly that has already exists, filling the screen with well-known celebrity faces.

Because at the moment, Food and Drink, revamped or otherwise, is just another random show, about food, on the telly, sitting amongst the hundreds of others, not saying much at all really.

Mr Noodles said…
I've seen a couple of shows. Everything seems so wooden and stilted and there's a distinct lack of chemistry. Too dull and worthy for my liking.
19 February 2013 at 11:57

Lisa Cookwitch said…
I'm inclined to agree. The wine expert seems to be just a decoration, not because of her knowledge, which I don't doubt for a second, but the way she's seen as a sort of 'add-on'.
Hmm.
I miss the days of Michael Barry and Chris Kelly. Though not Gilly. Oz Carke is fabulous but has become a parody of himself.
19 February 2013 at 12:11

Kavey said…
I want to like Kate, I do. But actually I can't stand her and whilst I've tried to stick with it, and can watch several minutes of the rest of the gang, a few minutes of Kate has me racing for the remote. I don't know what it is but... she really grates.
19 February 2013 at 20:39

Ed said…
Great article. Agree with it all.

I was involved in the making of a tv programme last year ... the concept of what a BBC2 viewer apparently wants is, sadly, a little disheartening. Until that changes (the view of the execs, not the actual desires of the viewers), then we'll be stuck with more of the same.
20 February 2013 at 13:02

Stuart said…
What is it with the new F&D that they are unable to be seen to be "endorsing" products....all the wines Kate Goodman selects are shown with the label the wrong way round, so you can't go out and buy it. I do seem to recall the original F&D giving you advance notice of what they were going to drink, so you could go out, buy, and taste with them.
Like other posts here, i also find her a little irritating, and I think it's the over enthusiasm, like a Jack Russell on heat, yet without the substance of delivery to demonstrate her undoubted expertise. I'm sure she'll grow into it, but the producers need to give her some guidance.
14 March 2013 at 13:29