Make Cabbage Your Friend, Not Your Foe 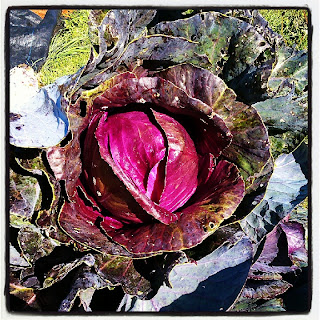 Out of all the vegetables and fruit prone to suffer from an inferiority complex – and you know, it is quite possible that some do – I would estimate that the humble cabbage suffers the most. On face value, cabbages just don’t have the same va-va voom as say, an aubergine or a globe artichoke. Rather than being thought as sensual and decadent, cabbages are often perceived as being hard, dull and protestant. Steadfast in times of need, particularly at this barren time of year but they are hardly exciting. Even the very word ‘cabbage’, the way it sounds, dents the ears. Repeat to yourself quietly, “Ooh, I’d love to eat a cabbage,” and you’ll see what I mean. Say it out loud, in a public area and bingo, you have just singled yourself out as someone who essentially boring, bizarre and sulphurous.


But why are these brassicas so maligned and misunderstood?

Well, right from the beginning, they have had a bit of a bum rap really. Wild cabbage has been plentiful on our shores for over 4000 years and was a staple part of the diet for many a Celt. Yet according to Jane Grigson in her venerated Vegetable Book, she says that “wild cabbage is really very nasty indeed, “ as it needs washing and boiling a multitude of times to extinguish the bitter taste.  A wooden bowlful of soft, gooey, green slop could hardly have been appetising for your average, naked, wode smothered Iceni tribesman. And even in this day and age, for some, this is still the preferred method of cooking. 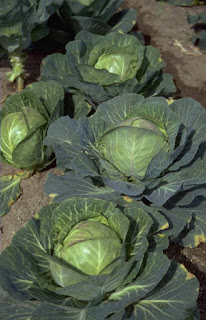 Also, historically, cabbages have been regarded more for their medicinal properties than anything else. To cure ailments such as bad stomachs, heartburn, nausea and hangovers. The paradoxical thinking being, that cabbage helps to release any ill wind from the body. When of course, it does nothing of the sort. In fact, it helps to promote ill wind as cabbage contains raffinose, an indigestible sugar and soluble fibre, which can only be broken down in the gut by tiny, tiny gas-producing bacteria.  Unfortunately then, any vegetable that relates itself to the activity of farting is bound to suffer from bad press.

Couple this with modern-day perceptions arising from memories of school diners, the ‘Cabbage Diet’ and links to food borne illnesses and death, well it’s no wonder that cabbage has an image problem.
Of course, this sort of rhetoric is harmful and by using some of these explanations and examples, I am picking on cabbage just a little bit; and I shouldn’t because really, I am quite the fan.

Down on the allotment, we like to grow a variety of cabbages such as Savoy, January Kings, Chinese Leaf, red and white cabbage and variants such as kale and calovo nero. And battles are hard fought and won (and sometimes lost) when tending to them. Because if there is one thing a tricksy snail or slug likes to eat, it is cabbage. Last summer it was all out warfare due to the inclement weather which helped the dreaded gastropods to thrive and I often used to leave the plot, trailing a slime-splattered spade behind me wearing a thousand yard stare. Still, it was worth the effort, protecting the seedlings from certain doom because come autumn and winter time, rewards are born in the shape of solid hearts and blossoming leaves, packed with vitamins and goodness. 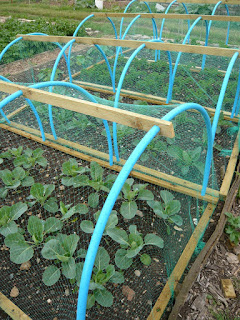 My favourite I have to say is the red cabbage; either cooked long and slow until tender and delicate or sliced thinly to throw into a bowl with sliced carrots, beetroot and fennel and mix together with a light mayonnaise and maybe a bit of chopped tarragon for a crunchy, colourful, seasonal coleslaw. Resorting back to the slow method for moment though, Mark Dobson’s Roulade of pork belly with braised red cabbage and apple compote is definitely a dish I would like to try out soon because pork and red cabbage is a marriage made in heaven. Although it does also go well with duck and venison too. Ah decisions, decisions. 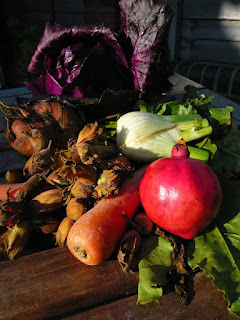 The main point however is that cabbage, served either alone as a centrepiece (stuffed is good) or alongside as an accompaniment, is absolutely and unequivocally a vegetable to be celebrated.  It is certainly not one to be perceived as mundane or lacklustre; in the right hands and with the right preparation, it can be downright sexy. 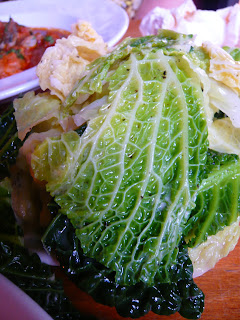 And if the spectre of serving it up at the table, at the risk of voluminous guffage later in the evening worries you. Just remember, in some cultures, it is seen as a compliment.

So go out now and buy some cabbage and let rip.

Alicia Foodycat said…
I love cabbage, although it did take a long time for me to recover from my grandmother's cooking to learn to appreciate it. These days I am torn between red and savoy as my favourite.
2 February 2013 at 17:06

Unknown said…
Great post! I adore cabbage (which I always pronounce with a phoney French accent precisely for the reasons you give above - so it's a cabaaaarge in our house. ) and find it very good for minestrone and coleslaw of which I eat heaps.
3 February 2013 at 08:27

Food Urchin said…
Foodycat - Oh dear, scarred my Nan's cabbage, not good (red all the way for me)