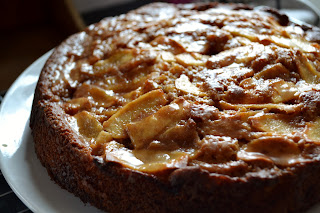 Last weekend was supposed to be all about the fiddle-di-dee, emerald pantaloons and general plastic paddywhackery and to a certain extent it was. I definitely enjoyed the craic, thats to be sure, to be sure; celebrating the lives of not one but two Saints. The first being St Patrick, that vanquisher of snakes and snaffler of shamrocks. And the second being Patricia, my Nan, who is more disposed towards profanity rather than piety. But at the grand old age of 80, she has more than earned the right to have her opinions and to wear red hats with purple clothes.

However, rather than drown myself in lakes of the black stuff at her birthday party, I decided that cider should be the drink of choice. Which was rather a daft decision indeed. Cider is lovely stuff. Happy, social, giggly, fermented apple juice that gets you dancing and cheering and chatting with great aplomb but it doesn't half deliver a hammerblow that sends you tumbling down the rabbit hole. After a healthy 4 or 5 pints of Aspalls (probably more) members of my family started to twist and morph into creatures from another, fantastical world; like dwarf extras with hair sprouting at odd angles and grinning inanely under bulbous noses. Looking like cider producers really. And then, the drunken fear began to descend.

My wife, sensing the downward spiral carted me out of the house toute suite and loaded me into the car, where apparently I rested my head on the dashboard for the entire journey home, murmuring softly. And then I woke up in the early hours, on my daughter's bedroom floor, clutching a large, cuddly caterpillar.

Moments such as these, however surreal, do serve a purpose though and after staring back at my little girl's bright, puzzled eyes, piercing through the gloom of dawn, I decided there and then that I should leave the cider well alone in future.

Well, for a little while at least.

Yet when I peered into the fridge later in the morning, there was still one bottle languishing there, missed and forgotten. So rather than pour the loopy water down the sink, I decided to have a crack at making an apple, cinnamon and cider cake as featured in Rick Stein's Spain. By all accounts, 'sidra' is quite popular in Northern Spain, around Asturias, Galicia and Basque country and they are partial to cooking with it as well as drinking it. And I am all for the cross-fermentation of ideas. I mean c'mon, booze in cake, whodathunk?

I am not a cakey-bakey sort of person but this was certainly very easy to make. If I had to tweak the recipe, I would suggest baking it for slightly longer, on a lower oven and maybe using a little bit more cider in the sponge. Not that it really needs it, the cake is moist and tart enough as it is, I am just thinking of removing the temptation some more. Still, give this dense, sweet, apple treat a go as it will definitely lift the spirits; especially since the weather remains to be so cold, inclement and poxy.

As for lifting another glass of cider, I think I am going to wait until the summer when I next do that.

Method
Preheat the oven to 190C and grease the inside and base of a round 23cm loose-bottomed or clip-sided cake tin.

Quarter, core and peel the apples and slice them thinly into a bowl. Stir in the cider, cinnamon, sugar, vanilla extract and the cream.

For the sponge, cream the butter and the sugars together in a mixing bowl until light and fluffy. Gradually beat in the eggs, adding a tablespoon of flour with the last couple of additions to prevent curdling. Strain off any liquid from the apple mix and pour into the sponge mixture, beating in well with a spoon. Then sift in the flour, cinnamon and baking powder and gently fold in. Stir in the ground almonds and enough cider to give a 'dropping' consistency.

Place on the middle shelf of the oven and bake for about 50 minutes until a deep golden brown and cooked through. A skewer pushed into the centre of the cake should come away clean but if it needs cooking further, place some foil over the top of the tin to prevent catching and bake for a further 10 minutes.

For the glaze, pour the cider into a small pan and boil rapidly until reduced to 2 tablespoons. Tip into a small bowl and leave to cool. Beat in the icing sugar and drizzle over the cake and leave for a few minutes to set. 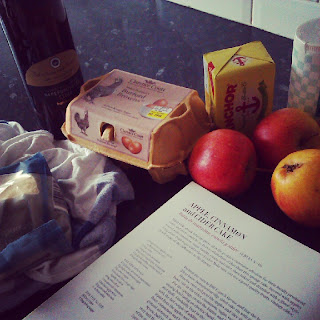 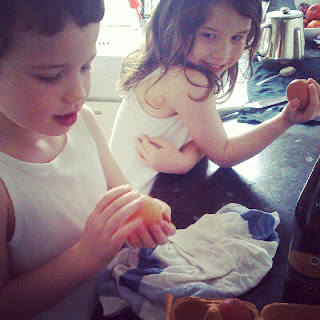 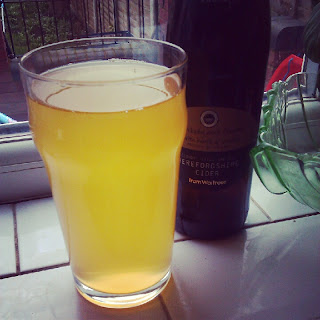 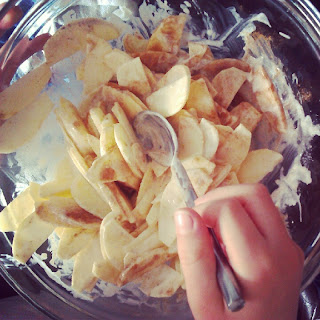 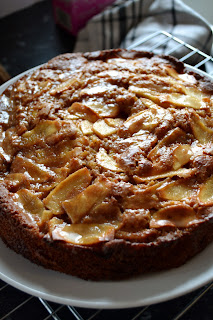 things we make said…
I like the sound of that, I do like apples in a cake and a cider hangover is beyond evil.